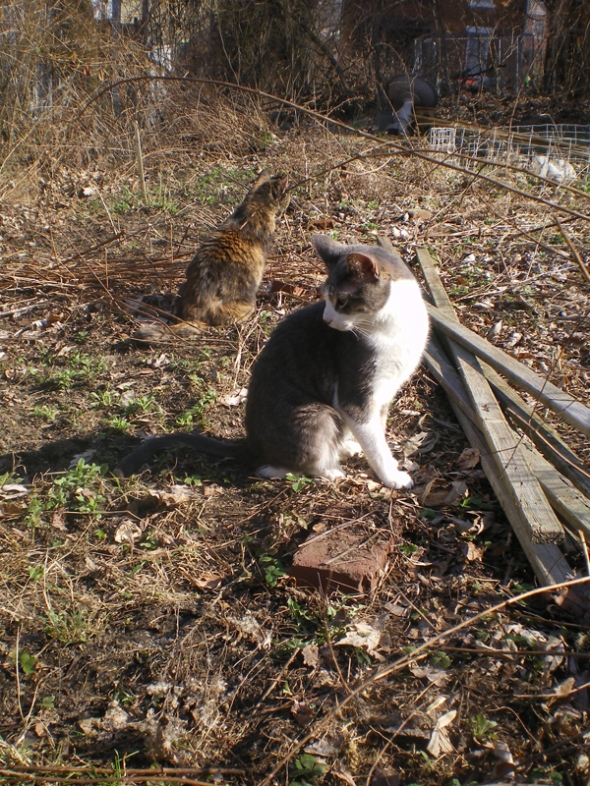 My two seniors join me outdoors to supervise my gardening.

It’s a joy to share the time and the experience with them, but with a flicker of sadness, to watch Namir sprint across the yard just for the joy of running and Cookie patrol the garden paths, even in the late winter when strewn with weeds and debris. It means they are old enough to want to stick with me while I’m out in the garden, old enough that our time is limited and these will be our golden memories. It’s a tradition when the old ones get to be this old that they also get to enjoy time outdoors with me.

Because animals live shorter lives than we do, chances are we will outlive them. And if we adopt and foster a number of animals, we’ll live through that many losses. It never gets easy, but with the awareness gained from each loss, watching the oldest grow into their senior years is less shocking and painful. Animals are so graceful about aging, not like us fretting about gray hair and memory loss. The brevity of their lives may seem unfair to us, but that span is normal for them. The lesson is to enjoy them in this moment while preparing for the unavoidable, but not to dwell on either. 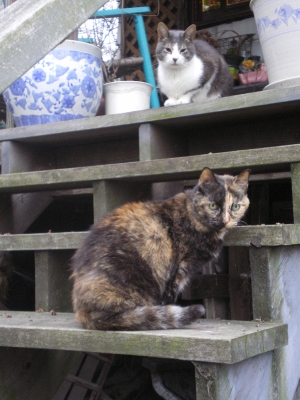 Namir and Cookie are not happy about having to go inside.

Out of the mixed bag of the eight or nine rescues I always seem to share my space with emerges a “couple”, a male cat and a female cat, spayed and neutered and totally unrelated except for having spent the better part of their lives together and with me. They become as the prince and the princess of the household and grow old together, growing wiser and closer to me as they age.

I am in my third “couple” now. Cookie is 17, Namir is 15 with congestive heart failure and other complicating conditions. Cookie is apparently fine though not as flexible as before, but Namir has had some close calls and spends a night or two in the oxygen cage in the emergency hospital for a “tune-up” at least once yearly since he was diagnosed four years ago. I’ve had cats live to their late teens and early twenties; even the best of care and love can’t bring back that seeming infinity of youth.

But I’ve always noticed that a trip to the great outdoors of the back yard is an antidote to a lot of ills for them and me, even just a few minutes will do. My yard is a Backyard Wildlife Habitat so it’s full of smells and noises and movement and the noses get to work and ears swivel around and eyes focus on tiny movements, and soon discomfort and infirmities are forgotten in the important business of being a cat. 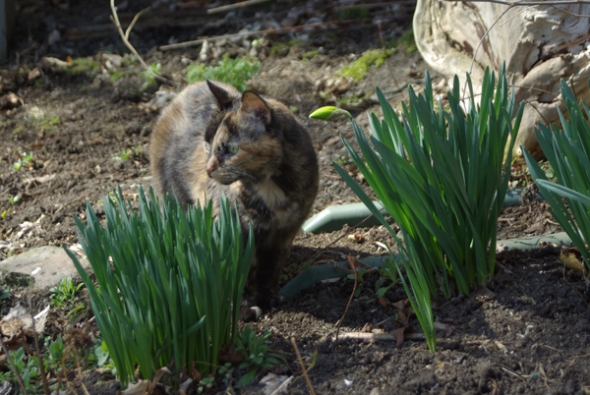 Cookie pauses to let me see how well the daffodil greens match her eyes.

Cookie (see “The Goddess” for another look at Cookie) has been my lady-in-waiting since she grew from a roly-poly tortoiseshell ball of an abandoned kitten to a generously-figured and poised tortoiseshell adult. She entered my household unresponsive to affection and “nursing” on one of her own toes for comfort, but quickly and wholeheartedly accepted that she was loved and welcome. She spends time on my lap, but more importantly she is always near, always vigilant, I’m not sure what for, but I’ve always been comforted by Cookie’s presence and perhaps that’s all there is to it. We give each other the gift of ourselves, and it doesn’t have to be more complicated than that. 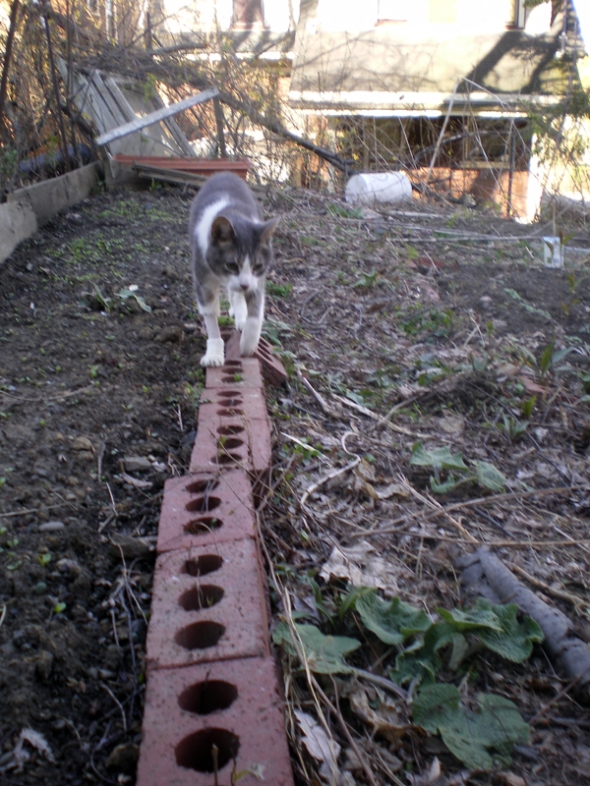 Namir stays carefully on the brick edge after inspecting the new lettuce sprouts.

Namir (he is in the header image on this blog, and see also “Darling Clementines”) entered my household as a foster from a friend who was returning to graduate school and just couldn’t take her two cats, and though we tried for months for find them homes they ended up here. Now one of the sweetest and most popular cats in my household—he’s even popular at the emergency hospital where, even with tubes and bandages he’s desperate for affection and takes a long goodbye when he leaves—was hardly even social when he arrived here. He’s very loyal and loved his mom, and every time I entered the room he’d stand up hopefully, then crouch and growl at me because I’d apparently taken away his mom. He arrived here in October; it was April before he accepted the situation.

Just recently Namir was back in the hospital and wasn’t responding as usual; after bringing him home I had to take him back. On his second return home he just wasn’t coming around. From his initial diagnosis I’ve been anticipating the final decisions for him, knowing that one day this little tune-up won’t work. This time he seems to have pulled through and is feeling well enough to swat the young men (Mimi’s Children) when they get out of line. 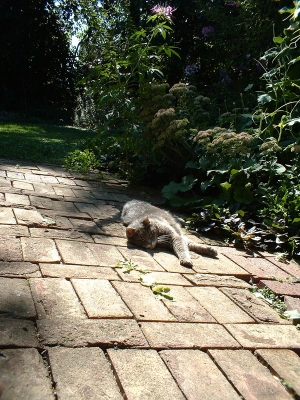 For Moses, the sun-warmed bricks were her treatment of choice for her arthritis.

Cookie and Namir acceded to their thrones a few years ago with the passing of Moses and Stanley. While Cookie and Namir displayed leadership potential from a young age, Stanley had been abused and was a real problem child into his teens, and Moses was a timid feral rescue, physically challenged by the after-effects of near starvation, but was the sweetest, most gentle soul I’ve ever known. These two entered my household a year apart and discovered each other’s gentle spirits when they were still healing from their time on the streets, and through it all were a refuge each for the other.

Moses (see “A Rosy Glow”) had malformed hips and legs from the beginning, and no matter what treatment I found for her, the best thing was simply a sunbath. She was terrified of the outdoors and of other people and things, but when it came to the line of the sun creeping out of the kitchen or basement into the outside, she decided she wanted to follow it, and as often as I could she and I went out into the yard, she to lie on the sun-warmed wood or bricks, me to work my garden. It’s no wonder she was unsuccessful at feeding herself when little velvety voles ran over her paws and birds hopped all around her as she lay there and watched. She adopted one clump of grass at the corner of one of the garden beds to graze on, and it’s still there in her memory. She surprised even me by living to be 19 years old, not showing any serious health problems until just a few months before she died. 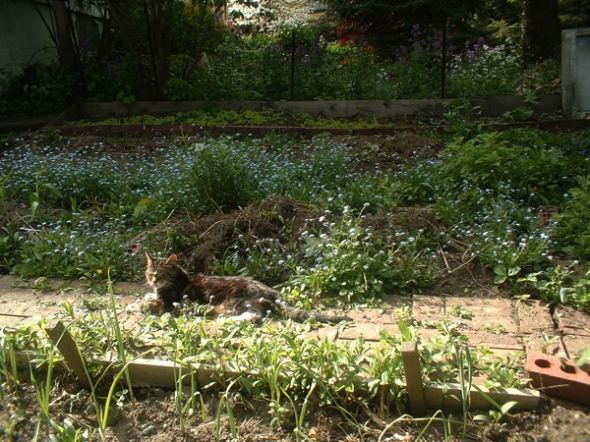 Stanley dozes in the early spring garden while supervising my work.

Stanley’s misbehavior inside came in handy outside, and trips to the outdoors helped stop him from errant watering in the house. He was very territorial, and whenever he saw another cat in his yard, he’d pee on the next nearest thing, inside. When we began visiting the yard he would run around sniffing everything, especially the forsythia which was like a big feline chat room, and after downloading his pee-mail he’d upload a few replies. Apparently this was more direct than giving a reply indoors, and it had the added benefit of keeping most cats out of my yard, and discouraging all but the bravest (or least intelligent) rabbits and little critters from inhabiting my garden.

Stanley (see “After Dinner Nap”) was well into adulthood when he showed up on my porch in 1986, and he was with me for a little over 20 years. He was in kidney failure for his last four years, but I treated him with fluid therapy and vitamins, and he was vigorous until his last few weeks.

And Stanley and Moses took over from Kublai and Sally, the original prince and princess, so noted in one piece of artwork I created simply to commemorate their place in my household, “Awakening”, where you can read their stories. As opposite as you could get, but they were the leaders for years, and in their day the other cats would answer to them before me. Their photos are on regular film, and I’ll have to scan them one day and get them up here, but in the meantime they are the subjects of several pieces of artwork. 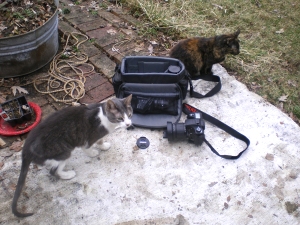 So as I watch Namir chase leaves and harass Cookie for fun, and Cookie cruise around and nap in the leaf litter, and have them both supervise my gardening progress while enjoying their time outdoors, I thoroughly enjoy their presence and remember their predecessors…with smiles more than sadness. Each loss prepared me for the next, and that was their final gift to me, and to the household in which they had lived. While I still miss all of them, even the ones who didn’t rise to royalty, I know that someday, perhaps soon, I’ll be missing Cookie and Namir, too. Loving them in the happiness of just this moment alone builds these smiling memories, and these will be an important element in dealing with the final decisions, and with their loss.

I just wonder who they are planning to pass the scepters on to. For now I tell the young ones who want to join us that someday they’ll be that old, too, and then they’ll be able to come outside.

For other writings on my cats in the garden and gardening in general, please read “My Cat Has Become a Serial Killer” and “On Planting Peas” on my website in the writing section.