I began a portrait of Madison way back in the summer, but between the festival and a few foster cats moving in and out of my spare cat room/studio it’s been difficult to work consistently. But Madison is finally done, and his person came to pick up his portrait this weekend.

She lost Madison, her first cat, last year, to diabetes at only eight years old. She didn’t have too many photos, but this pose was definitely a winner! Not just because he’s cute in the sink, although he is, but also because it will make her laugh when she looks at it, and what better healing for the grief of loss than to remember with a smile. I’m so glad to know that another person, a special friend, has a portrait that shows their animal companion as they want to remember them.

Animal fur is different from human skin, and because of texture and pattern it looks different in every photo you’ll see. In each of Madison’s photos, the details of his face were lighter or darker, the area on his chest had a collar and tag in one photo and not in another. These are common things to work around, and from both experience and real life I can fill in the details. It just so happens that I am fostering a big tabby cat who looks so much like Madison and has been a great model, and who came in just as I was finishing, that it must have been meant to be!

What I always do in building a subject, especially one I never met, is to work from the photos until I feel that I know my subject and the photos start to get in the way. Then I put them away and work with nothing but what I see with my creative eye. That’s when the essence of the personality is instilled in the portrait, and every time I’m amazed at what’s taken life on the paper. And I know by the reaction of the person who’s come to look at the work.

I never delude myself to think that a portrait can take the place of a real live animal, but it can certainly help with grief. Through the years, many customers have contacted me to let me know how much it means to have the portrait in their home, that they greet the portrait or talk to it, or visit it when they are feeling overwhelmed with loss, even that other cats have reacted to it.

The portraits work for me. I have several of my own to visit.

What is it About Black Cats and Halloween? 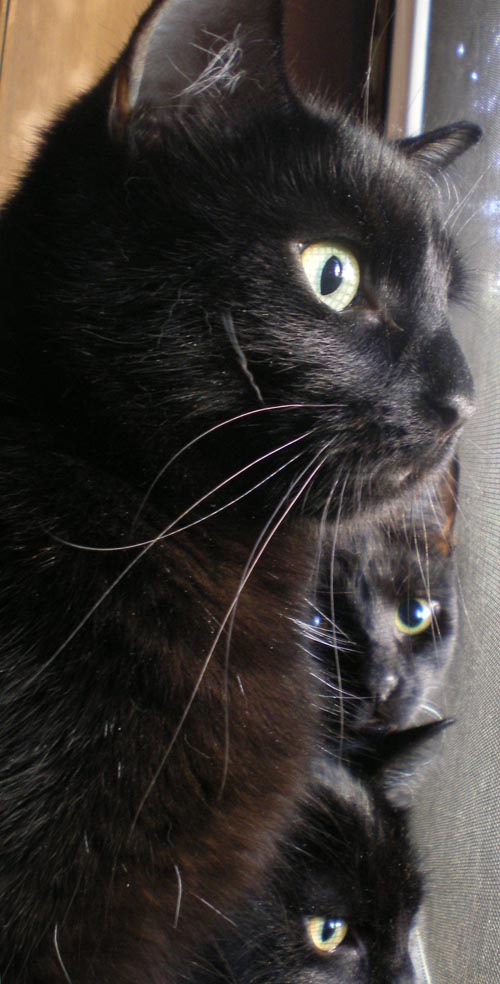 Ever wondered why black cats appear with witches and demons and skeletons at Halloween? The reasons are numerous, and when I studied English literature in college the story was that persons who had been cast out by their community for practicing non-Christian beliefs, including traditional healing, literally lived on the edge, in the woods, just like the witches in old fairy tales. And cats, preferring to live in more secluded places like this, tended to stay with these outcasts. Whether cats were considered, in part, evil because of their personality or evil because they tended to hang with suspected evil people isn’t really clear, but cats gained that connotation and were just as persecuted as the humans they accompanied.

But there are other stories, too, and not just about Halloween. I’d like to share with you an e-newsletter from a fellow member of the Cat Writer’s Association and author of 22 books on animal care, Amy D. Shojai. If you look on many books on ntural or standard pet care published by Rodale Press, or collections under the Chicken Soup for the ________ (fill in your favorite) label, you’ll see her name.

Please read through her valuable tips on animal emergencies and keeping animals safe at the holidays as well, then scroll down to the bottom for truly fascinating information: http://community.icontact.com/p/amyshojai/newsletters/petpeeves/posts/pet-peeves-issue-14! Keep those precious companions safe inside and away from the candy!