As Cookie and I cruise the yard, cleaning up branches and pulling aside flattened leaves to find green sprouts—okay, I’m doing the work and cleaning while Cookie supervises—I can also look into each door and window of my house and see everyone else watching us.

I know how much they’d like to be out here with us, especially now that it’s spring and the air is just intoxicating, but unlike Cookie they’d be off to other adventures faster than I could spin around and see them go. And then so much for my Backyard Wildlife Habitat if I introduce a non-native species that would surely wreak havoc on the natural balance—so I see from the neighbor cats who visit. And cats don’t obey property lines and can climb most average backyard fences, and where would I be without them?

I don’t let my cats outside to roam, but I have always had two or more garden sprites who hang out in the garden while I work outside. Usually this has been the oldest ones in the house who didn’t move too fast and were happy just to be in the outdoors. Cookie, however, has been outdoors with me most of the time she’s been with me because she feels she is somehow responsible for me, or so I gather, because she is never far from me, quietly vigilant, checking in with a head butt or a body rub every few minutes, purring happily and squinting her green eyes.

Mr. Sunshine at the door.

But while I enjoy having one or more of my kitties outside with me, I’d also just like to give them the opportunity to enjoy the outdoors without me chasing them and without a leash to be tangled in. I have always wanted to build an enclosure that they could access on their own which was strong enough to withstand both the rigors of clever cats and of the weather and wildlife that happen in my yard.

Chris Davis, author, artist and owner of Lighthearted Press, came to the same conclusion when she bought her property in Oregon and set up habitat encouraging native birds, then her dog found a litter of kittens and everything changed. The cats came inside for her dog Jake to raise, and she and her husband planned, designed and built an attractive and durable outdoor “room” using hardware cloth for the walls and roof, bringing in downed trees from the woods and building shelves for kitties walk, climb and snooze on. I haven’t let my kitties know about this or there’d be you-know-what to pay!

When I first saw photos of it I thought it was a greenhouse room or deck with the colorful shelves, benches, tables and plants. Rather than leaving it as a plain and functional space with a grass floor and bare trees and a few shelves, they decorated the space to be a usable area for themselves as well. The room incorporates some of my favorite colors—purple, violet and turquoise—and people can fit in the room as well as cats so Chris can enjoy the outdoors with her cats.

“So yes, it’s a good size,” she says. “However, this could be any size—even a small enclosure would be loved and appreciated by any cat.”

They first built the structure 10 years ago, and it took about three weeks. Having designed the entire thing themselves they had no advice or other experience to help decide about materials or structure, but only a few changes needed to be made to their original idea.

“We upgraded all the decks and stairs a few years later when it became clear the pile of logs wouldn’t last in our wet weather,” Chris comments on the more rustic beginnings.

I wondered if she had left grass as the “floor” in the room, this being the most logical thing to do for kitties who like to be outside, but also thinking of the difficulty of keeping it trimmed in an enclosed space, probably by hand. Initially, most of the “floor” was grass, but ultimately that had to be changed.

“Unfortunately, the grass just could not thrive in the soggy ground. I tried over and over to bring in sod or seed it, but this is Oregon and there’s a LOT of rain. The slope behind the enclosure has natural springs, so a lot of rain wound up in the lowest part of the yard, which was the enclosure,” she explains. “I finally gave up and put in stepping stones with gravel for drainage, and have planted ground cover in the gravel which is growing better. In the summer the kitties love to sprawl on the stepping stones because they’re cool.”

She also decided to cut back on the plants she kept in the room. 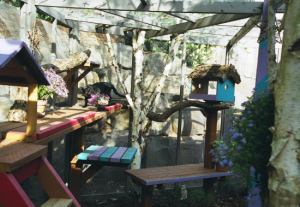 “I do put out cat grass and a few safe cat plants in pots, but over the years I’ve pulled back on those because the kitties just LOVE to eat them…and throw them up. I can hang flowering baskets because they can’t reach those,” she said.

And do her kitties appreciate all her efforts? I can see a feline eye roll and perhaps a tail flick if they’ve found something that hasn’t met their specifications.

“I have 4 sibling cats—they’ll be 12 next month. When I had doggies they loved the enclosure, too,” Chris says of the lucky animals who share their special outdoor space.

And they don’t have the run of it all day and night, only under supervision, in part because of “visitors”.

“I used to keep the dog door open all the time, so they could come and go in any weather. Now I’ve closed that off and give them selected play time during the day, when I’m home and can supervise,” Chris says. “Although I’ve done my best to plug all the holes, I can’t keep the moles from digging under the enclosure and coming up. The cats brought three inside a few summers ago—they just drop them in the kitchen. Thankfully I rescued all the moles, but that’s when it became clear I had to supervise their time much more clearly.”

And do they have a litterbox al fresco?

“There are no litter boxes out there. It’s a hoot to see a cat come running inside, use the litterbox, and then go back out- just like a child!” Chris says.

As far as structural changes, “The only thing I would have done differently was build a weatherproof top. Right now it’s all the 1/4 inch hardware cloth (screen) which is hardy and has withstood our wet weather, but it doesn’t make it pet friendly in the winter,” Chris says. “That has never kept the cats from going out in the rain or snow, but I think it would have been more fun if it had an actual ceiling.”

Chris explains more about her cat enclosure on her website where you can read more about it, see more photos as well as click to a narrated video on YouTube.

Chris Davis is the author and illustrator of four beautiful books, For Every Dog An Angel, For Every Cat An Angel, Old Dog and the Christmas Wish and Shelter Dog…books that celebrate our magical companion animals. When you visit her site to see the enclosure, make sure you read about her books and enjoy the samples pages she has from each one. I really love her whimsical style and the rich, bright blending of colors.