A Therapy Cat for Visitors As Much As Residents 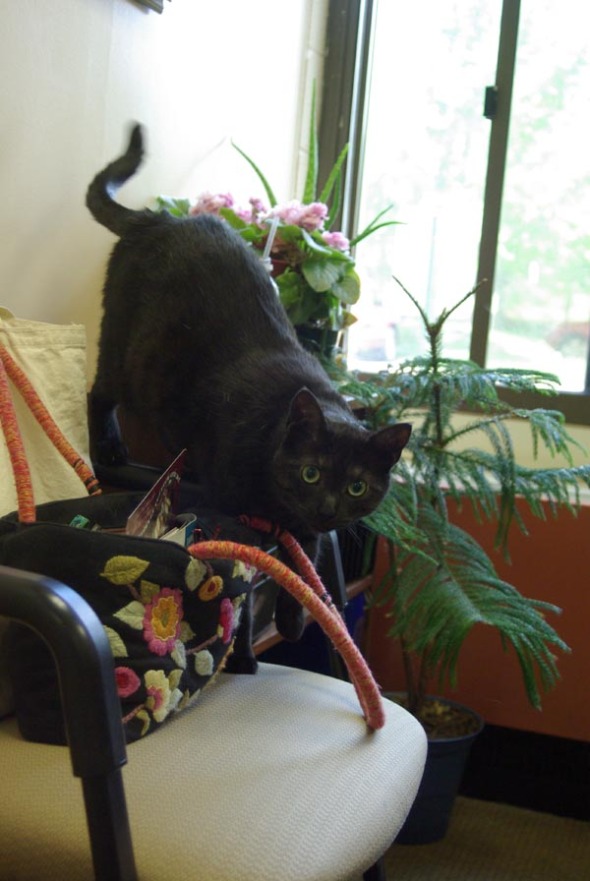 Roxy getting messages from my purse.

One little kitty can really brighten your day, and if she happens to show up in a completely unexpected place and time she can seem like a little angel sent just for you.

Moving one’s parent into a nursing facility, while it may come as a relief that they will receive the physical and mental care they need, is rarely a positive activity. So many other options for care are available that by the time a person needs to enter skilled nursing they are so incapacitated by acute or chronic illness that recovery is not probable and time is likely limited.

So it was with my mother’s move this past weekend after a stay in the hospital, after several months of decline into greater dementia and lesser physical ability.

She entered the facility on a Saturday when a skeleton staff was on hand. She would have excellent care no matter the time or day, but I would only sign the most essential forms that evening and return on a weekday to finish.

But what a surprise and joy when I entered the administrative office to sign those forms to see a very alert kitty on a nice cat tree in the corner of the darkened office!

Much has been written about the benefits of animals to persons in care facilities, even persons in deep dementia. An animal’s non-verbal and naturally friendly nature is not threatening as the rest of the world must seem to a person who has lost control of some of their mental and/or physical capacity.

Well, I can attest that these animals are just as welcoming to those of us who are committing our loved ones to this type of care.

I signed the forms and went over to pet the cat who was leaning a little toward me with a skeptical look, and in the dark at that end of the office I saw another bed on the floor, food and water bowls and lots of toys. This was one well-settled kitty!

“Does she live here?” I asked the nurse who was organizing my papers. “Is she a therapy cat?”

“Yes, she lives in the office here,” the nurse told me. “She doesn’t come out too much during the day but the residents who like cats can visit her.”

Well, I thought, I’ll have to look into this a little further as I visit my mother.

My mother has been in personal care for a little over seven years. She had lung cancer surgery then and because of her underlying heart disease barely survived, recovering slowly and remaining weak and subject to bouts of dementia and pneumonia. Living in personal care actually improved her health because she was not only well cared for but living communally she was more vibrant and social than she had been in years.

This past year has been difficult, though, as she made one final slip into dementia last summer and really didn’t emerge, beginning to lose weight and physical ability at the same time, falling more frequently. She usually recognizes me, but at the same time everyone she has ever known is also currently alive and recognizable as well, maybe even in the room with us, and she would argue the point if I questioned her.

I could no longer easily take her out to shop or for a quick meal as even her diet changed, and visits often consisted of following her as she marched up and down the hallway pushing her walker.

Now walking is difficult, and even demented conversation is rare. I know she is aware of me when I visit, but to see her can be disturbing.

So how nice to know there is a friendly kitty handy in the building for when I need to restore myself, though my mother is not so restored by animals; I think the fur feels unexpected and therefore a little frightening under her hand. 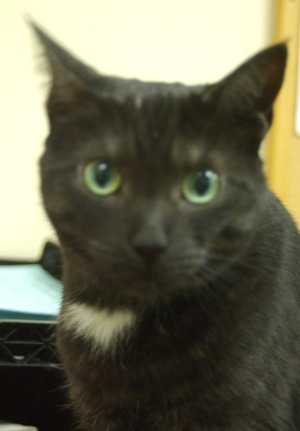 “Our Director of Nursing found her mother, Chloe, in a dumpster,” said Sue Haver of the business office and a 34-year employee of Kane, who is Roxy’s primary caregiver at the facility. “We decided to give it a try with a therapy animal and she’s been here since she was just a tiny kitten.”

No wonder Roxy seems so comfortable with her position in the office. She’s been there virtually all her life. Still, it takes a special personality to live in a care facility with what can sometimes seem like total mayhem all around—conversations and phones ringing, humans with varying degrees of speaking ability at a sometimes startling volume, various assist devices from motorized wheelchairs to portable oxygen tanks.

Kane Regional Center is run by the county and isn’t a posh, over decorated retirement center, but even with the tile floors and cinder-block walls I have never seen more competent and compassionate staff and a bright and positive atmosphere. My father was resident there 20 years ago, and I know many others whose family members lived there. Some of the residents have truly profound disabilities, and the generosity of the staff to adopt a kitten who needed a home and take the time to raise her and treat her like a member of the family is testament to their open-hearted nature.

Roxy rolls on the floor.

Roxy returns the favor. She has the aforementioned toys all over the office, but she also likes to chase gum wrappers and will sometimes play fetch, bringing them back “very slowly, but she brings them back,” Sue remarks.

Like most cats, she’s the queen of every comfortable spot in the office. “If she’s on a chair and someone wants to sit there, they’ll go get another chair rather than move Roxy,” Sue laughs.

“She’s a really sweet cat,” Sue says. “She’s really quiet and affectionate, and she really doesn’t wander too far from the office.”

Residents who like cats are welcome to stop by to see her, though.

Roxy is given the run of the place at night and the door to the office is left ajar. “She wanders all around, but she often ends up in the chapel,” Sue says. “During the day she most often only goes to the end of the hallway.”

And she knows who to call for help.

Roxy in one of her costumes.

“If she gets locked out of her office, if the door shuts accidentally, she goes to the end of the hallway and meows in the direction of Security,” Sue explained. “If they don’t hear her, she goes to their office to let them know.”

Roxy at first appeared to be a black cat, but on closer inspection turned out to be a smoke tabby, very dark gray with black stripes, and a tiny white spot on her chest. Her eyes are a lovely aqua, just as much blue as green, that I haven’t seen in too many cats.

Roxy's costumes along with a few lab coats.

And she’s probably the only office cat with her own wardrobe of costumes. Here in Steelers Country, any black animal can quickly become a Steelers fan with the addition of a gold garment. “We like to dress her up for Halloween, and other times too,” Sue tells me as she slips a gold hoodie sweatshirt with a denim skirt attached over Roxy’s back and snaps it beneath her belly.

So I’m looking forward to visiting Roxy when I stop in to see my mother, and for sure Roxy will inherit a few of the toys my kids have doubles of along with some treats.  I’ll take my mother to see her at some point as well, and we’ll see how she reacts to seeing and touching a kitty. Lately she’s been insisting that Bootsie, the cat I was given for Christmas when I was nine, is still around, so perhaps she’ll think Roxy is Bootsie and be happy that this cat, whatever her name, is doing fine.

And because so many people who move into care facilities have to give up their pets, I’m glad to know that there’s a kitty for the residents here to visit and pet and play with.