It’s Always Fun When People and Animals Get Together 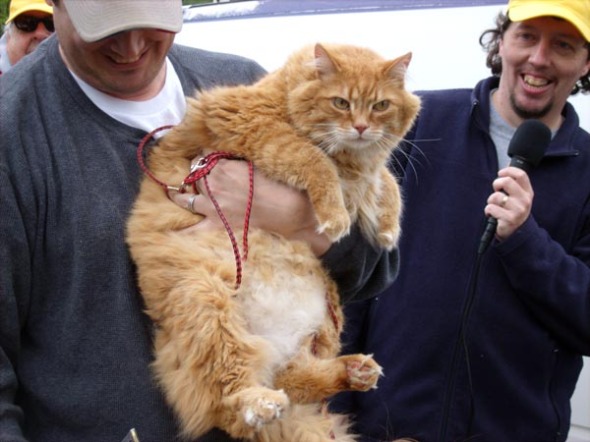 Buster, "Best Cat", but he didn't need to come out on an inclement Saturday morning to prove it.

Meet Buster, winner of “Biggest Cat” and “Best Cat” awards—but don’t get too close because he had a few choice meows at the idea of going outdoors on a cold, wet morning just for his human’s folly! He was, in fact, the only cat at the event and one of only three non-dog registrants, though I’m not sure he felt that made the inconvenience worth his time.

Despite the high winds and threatening clouds, over 70 people and animals were in attendance at the Second Annual McDonald McPet Parade in McDonald, PA on Saturday, May 8. 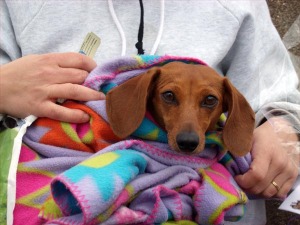 After a warm summer-like week, any day of which would have been perfect for this, storms rolled in Friday night and Saturday’s temperatures dropped to the 40s and it was VERY WINDY as 55mph gusts buffeted costumes and overturned tables of merchandise.

I attend many small events held for companion animals and their people—benefit dog walks, animal blessings, holiday photo shoots. I am usually a vendor displaying my commissioned portraits and merchandise featuring companion animals and wildlife, though sometimes I am a judge in a photo or art contest. 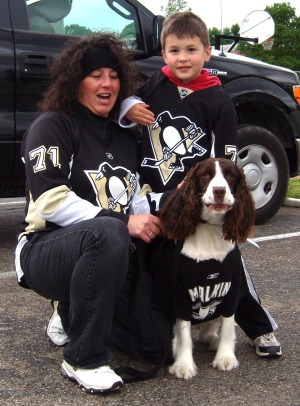 Pittsburgh loves it sports teams, and this whole family are fans of Yvgeni Malkin of the Pittsburgh Penguins hockey team who are currently in the playoffs for the Stanley Cup.

I don’t think it stopped anyone from attending, though a few people didn’t actually walk the quarter-mile parade route and a few people had to cover up their own costumes with heavy coats and a few pets had to just go home early. I thought the Penguins fan family could have won an award, but Buddy the Springer Spaniel was just too cold and unhappy.

The event was simply fun for the community and intended to bring the animal community together in this small town of 2,500. Organizers had plenty of awards so that everyone had a chance at winning something.

I had to park my car right behind my table and tie everything to it.

In between uprighting my table and chasing my lightweight portrait samples on the wind, I managed to take a few photos of participants I thought were most interesting.

I had earlier seen a few English Sheepdogs, but “Biggest Dog” award went to Snowball, a Great Pyrenees, pictured here with her buddy Daisy, who is smaller than Snowball’s head.

Lisa in her sundress.

Speaking of little dogs, little Yorkie Lisa’s costume, a newborn’s sundress was a little too big for her!

Ready to go home, with you or anyone in this weather.

And speaking of Yorkies, I was next to Yorkie Rescue who had brought four little adoptables to be part of the event. I’m not sure if anyone was adopted, but when you get four Yorkies together in a small space any photo is a good photo. 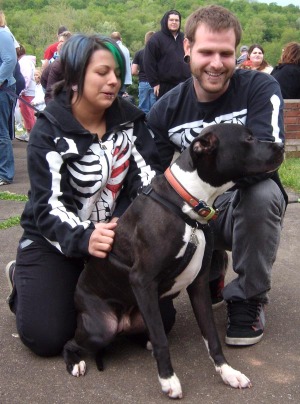 Beast and his people.

I saw Beast, a long-legged black dog with white paws, always my favorite marking on any animal, and some features of a boxer, some of a pit bull, some of a mastiff and probably a few other breeds as well, then noticed his people were also dressed in black and white with small red accents to match his red collar. I mentioned to them that they were all dressed alike and they laughed and agreed to a photo. They don’t care what breed Beast is, they obviously adore him, and I was glad to see no one had docked his happy tail or his ears. They had never thought of adopting a dog, but a friend gave him to them when he could no longer afford Beast.

Tammy and Cash with Ginger

And a little bit of a sad note that this will be Cash’s last event. She is over 12, old for her breed, and her mom told of the cancer Cash had been battling for several years; she wasn’t feeling so well and her mom knew her end was near, but Cash was happy to participate.

Another older dog, Abby the Hippie Dog was showing her era with her tie-dyed t-shirt and love beads. 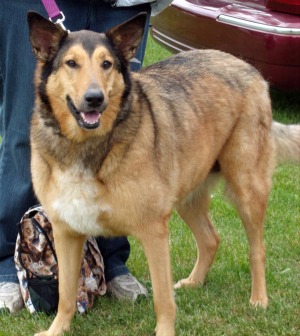 Many thanks to Jennydog for watching my table while I was off taking photos too!