← The Best People
We Remember Amber →

Inspired By the Grace of Trees 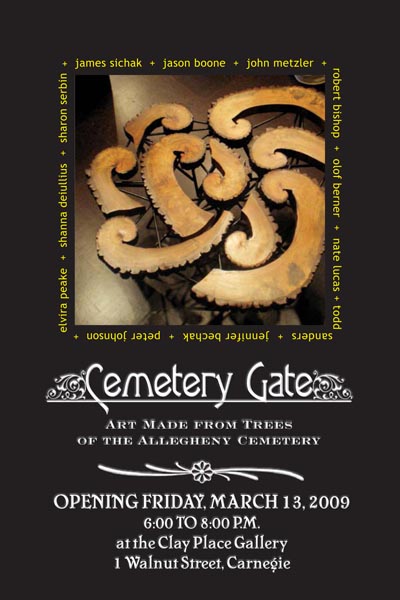 I usually keep my posts on The Creative Cat to animals, art depicting animals and the artists who create it, but I also stretch to artists who are inspired by nature.

In a general sense, artists choose a medium in which to express an idea because that medium has qualities that help an artist to speak. When you love your medium, you let it speak by choosing subjects where it will speak on its own rather than forcing it to represent something that’s not easy for it to express. That may sound like philosophical gobbledygook, but what it means in this case is that wood taken from stressed trees has color and grain and texture and shape and wouldn’t be well-used to create something flat and square and colorless, but you would use it instead to create a shelf or a platter or a wall piece that proudly displays all the swirls and scars of the grain and even the rough edges of the bark.

We lost an artist in Pittsburgh last week, an arborist who built a co-op studio to create art from downed city trees. I met John Metzler and his art and philosophy when I designed the post card for a show his studio held at The Clay Place Gallery last year. The images of what he and his fellow artists coaxed from the twisted and scarred trees formerly gracing Allegheny Cemetery are still with me.

(Just a note: John didn’t make the table on this post card, that was created I believe by Jennifer Bechak. John wanted to use one of the pieces by a participating artist on the post card instead of one of his own.)

He grew up loving trees and saw the same piles of trees I did when a local shopping mall and office park denuded and reconstructed hills along the highway. The trees were pulled out like weeds, piled up and burned. I felt real pain at this and couldn’t pass the site while it was under construction, avoiding it still at all costs.

John decided trees simply shouldn’t be treated that way and devised a way to find trees that were cut down, salvage them and turn them into art through Urban Tree Forge.

“City trees tell a story,” I remember him saying, “and you just have to open up the wood and let the story out.”

He was doing just that, working on a piece outdoors in front of his studio when a U-haul trailer let loose from a truck that had hit a pothole rolled off the road and hit him. It’s hard to believe a vibrant and energetic personality and an incredible talent will be silenced by a freak accident.

Please read about him, his studio and his art. His obituary is in the Pittsburgh Post-Gazette, visit the website for Urban Tree Forge to read about the studio, and visit the Urban Tree Forge blog to see photos of the trees he collected and what he and others made of them, including the trees used to make the tables for the G-20 Summit in Pittsburgh last September, and the pieces he had created, especially those included in Cemetery Gate–especially don’t miss the fireplace mantel in this blog entry, apparently his first piece and made from one of the trees taken down for that shopping mall.

2 Comments on “Inspired By the Grace of Trees”