Left Behind in an Apartment?! and Ferals… 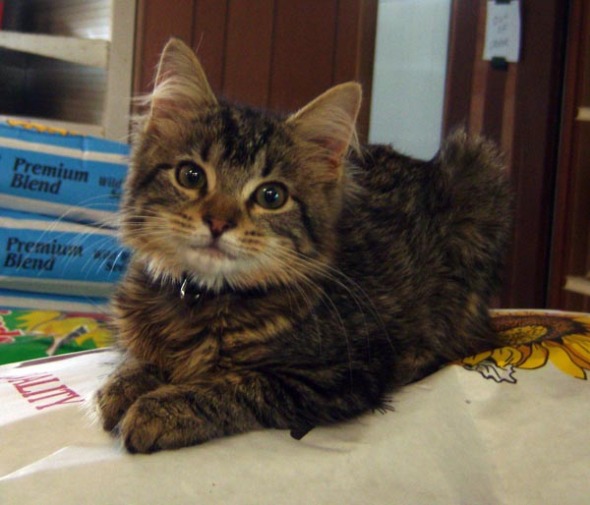 Who could do that to a kitty as pretty as this? She looks to be about four months old, a sweet long-haired tabby who’s very skittish, a little confused, but very affectionate underneath it all.

She’d just been there about an hour when I arrived, and I’m sure it will take her a few days to calm down after that experience. It had only been a day or two, but that’s long enough to make a kitty wonder a little bit about humans. She’s ready to be spayed, and no one knows her health history but if someone would abandon her it may also be that they wouldn’t have bothered with veterinary care, so likely she’ll need all her shots.

Four kittens, two from each litter.

And then there’s the stray mama with five babies! Apparently someone had been trying to trap this mama from the time she showed up, but not until someone gave the advice to just put the trap out with food in it but tie it open so she’d get used to it did the wary momcat finally lose her distrust of the trap. It was apparently easy after that to capture her kittens since some were in the cage with mom and the rest were right around.

As a bonus, there are also two orange kittens from another litter, also born to a stray mother, not yet caught.

The third black kitten is behind the litterbox.

I stopped at my local Agway farm store yesterday afternoon to pick up my cat food. I shop there frequently for cat food and litter, bird seed, suet and other outdoor things, gardening implements, plants and so on. They also carry my greeting cards and note cards and even some gift items around the holidays, and are my best seller—many of their customers are cat owners, and almost everyone who visits there owns a pet of some sort.

A few years ago after they lost their older kitty Pussy Willow one of their customers brought a handful of kittens from their barn. This was fine until she brought more later, then others who saw kittens for adoption began bringing kittens too. Like many good-hearted establishments they had a “kitten” problem for a year or two until they convinced everyone they weren’t taking kittens to be adopted, but they’ll still take in a cat or litter of kittens in an emergency, especially feral kittens, taming them and getting them veterinary care at their own expense and finding a good home among customers.

They haven’t had any kittens at all this spring until now, and I was glad to see that. They pay for the kitties’ care out of their own pockets. Farm supply stores don’t make a very good living in this area any more since most farms are gone, and it’s impossible to compete with the megastores that can offer more goods. Several years ago when they were in the midst of the overflow of kittens I had told them about the spay/neuter clinic as well as all the other options for low-cost spay/neuter in the city which has made things a little more affordable for them.

But here we are with that nice tuxedo mama and her five babies: three black kittens, a black and white and a gray and white. The two orange kittens, as mentioned, are from a second litter. The kittens are seven or eight weeks old, taming down from living outdoors. Mom needs to be spayed, all need veterinary care, all are up for adoption, or if you can’t adopt, a donation for their care would be very welcome.

Four kittens from the back of the cage.

The person who brought these cats in was another customer who’d been trying to catch the mother, then the mother and kittens, since April. Another mother kitty with more kittens is still out there, but they are even more wary than this group. They’d been living in a wooded area on the edge of a neighborhood, either escaped from someone or tossed out. The orange kittens are quite friendly, so they may have been born in a home and dumped somewhere when they started running around, as is common. The other litter was likely born outside since the kittens and their mom are closely bonded and the kittens have needed some taming. 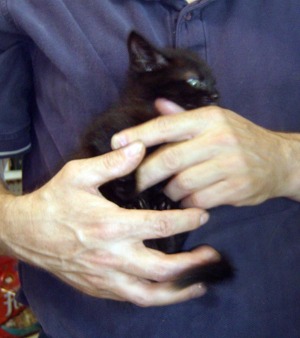 Don, who you see in some of these photos, is the owner of the place and store manager, and is very successful in taming wild little kittens, spending as much time as possible handling them in between work around the store. Sloane, the other woman who works there, dotes on them, and is the one who tosses all the toys in the cages. All the beds and food and toys and litter for the kittens come from store stock, which Don and Sloane pay for out of their pockets along with spay/neuter and veterinary care. This can get expensive after a while! They are a small operation and pay a higher wholesale cost for materials than larger stores. 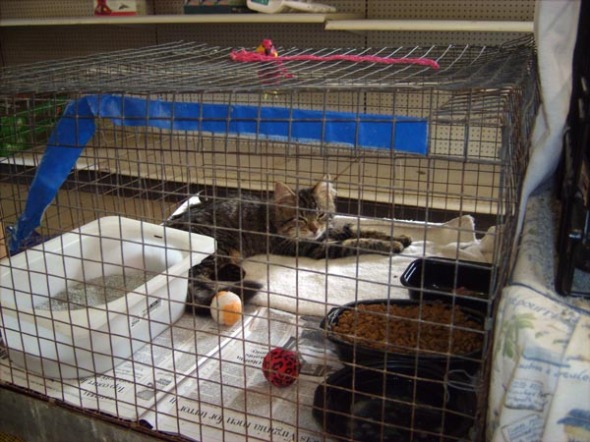 Tabby rests in her cage.

If you’re local, please shop there—it’s a neat store anyway, especially if you like to just hang out once in a while and spend an hour talking about the weather and the birds in your yard and how your tomatoes are doing this year. If you still like to help, just “buy” a bed or a bag of food.

Unless another opportunity opens up at a shelter, they’ll stay at the Agway until they are adopted.