← Peaches and Giuseppe, Sittin’ in a Tree…
A Nap While Reading →

A Taste of Station Square

Visitors to Taste of Station Square

Despite steaming temperatures and a thorough downpour an hour before the event, several hundred animal lovers attended the seventh annual Taste of Station Square with me last week! 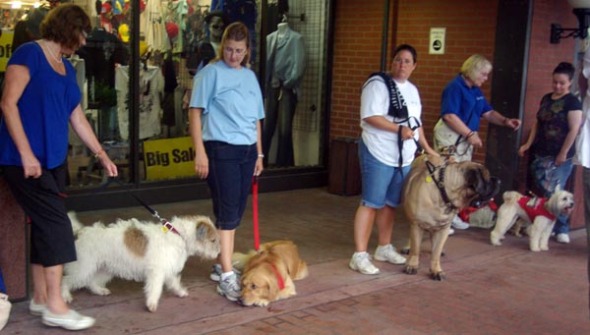 Dogs for adoption wait patiently for people to walk by.

The event benefits the Western Pennsylvania Humane Society (WPHS), and admission gave you a logo bag of loot and a discount ticket to visit as many restaurants and shops as you could, and participating restaurants had tasting tables for you to “sample” as you circulated. You also got one starter raffle ticket for one of many wonderful raffle prizes to which I donated along with dozens of others. 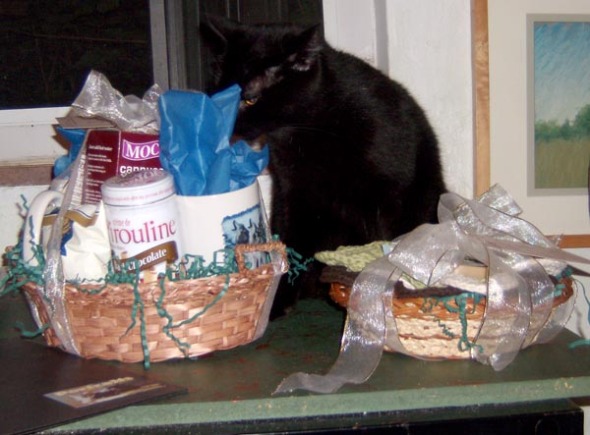 I donated a certificate for $125.00 toward a commissioned portrait (and the winner has already called me!), a set of “Natural” crocheted pawprints with “Oatmeal, Milk and Honey” hand-made vegetable oil and goat’s milk soap, and a set of two “Wolf Howl” fine art wildlife mugs with a collection of delectable hot beverages and snacks.

But the best part was that there were animals everywhere! Usually these events are canine-oriented because these sorts of large crowds of people, lots of noise and strange foods  are typically a dog thing, but there were several cats in attendance who just didn’t seem to mind any of the ruckus. 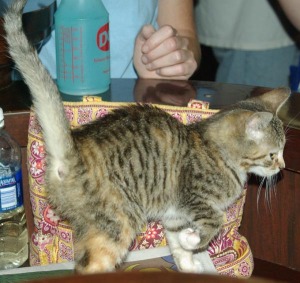 Little Tootsie was in the lobby of the Bar Louie restaurant taking care of what is usually the host’s desk. 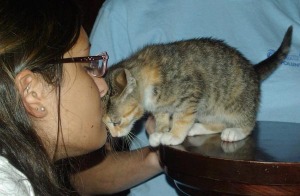 "Yes, you may kiss my forehead."

She didn’t care that the music was too loud to hear, that the place was almost too dark to see and people were crowded around, there were newspapers to crinkle, pens to subdue, and of course kisses to be bestowed—upon herself by humans!

Everything is a toy.

Where did this little torbie rescue find this attitude? I can imagine what she’ll be like as an adult! 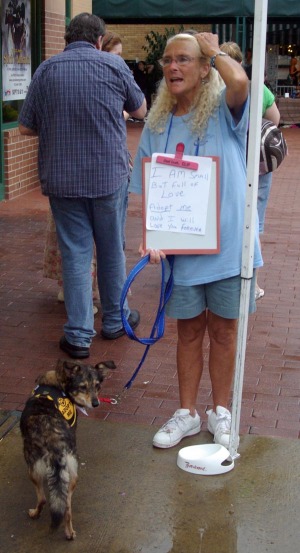 Lulu’s doing it right—get a human to stand around with a sign and make a fool of herself to find a home for you! 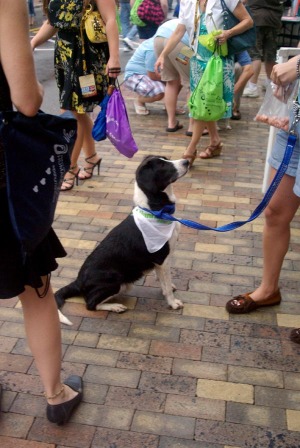 Cody is all about the treats.

And Cody, typically a hypersocial beagle-border collie mix couldn’t care less about all the people when the treats bag is practically on the end of her nose. That’s focus!

Louie is a little sensitive. 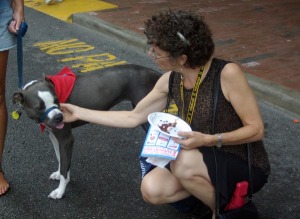 I attended with my friend Karen Litzinger, author of Heal Your Heart, and it was great fun to catch up on business and plan a few collaborations at events this coming autumn. Here she is with Bruna, a ten-month-old pit bull who simply sat down in the street and waited to be petted.

Two little tortoiseshell kittens had been found and brought in as strays, but they were so friendly and playful they attended as well, though they were too new to have names. Here a young man pets a kitty who looks  a lot like his kitty!

Sunset on the river.

Right on the river on a summer night, nothing is more beautiful, and the sunset after a rainstorm is always colorful.

Gretchen thanks supporters and donors.

The evening ended with dessert on the Empress Party Liner, docked on the Monongahela River, where Gretchen Fieser, Director of PR at the WPHS, thanked everyone who attended and read off the results of the raffles as guests pulled tickets.

Mr. Magoo, and Lovey and Dovey.

The event was sponsored by Lucky Paws Pet Resort. Apparently the owner had found a stray kitten and taken it to the nearest shelter, which turned her away because it was full, as did another one. She ended up at the WPHS, an open-door shelter, which will never turn anyone away. She was so moved by this experience that she wanted to do something to help them, and offered to sponsor this event. 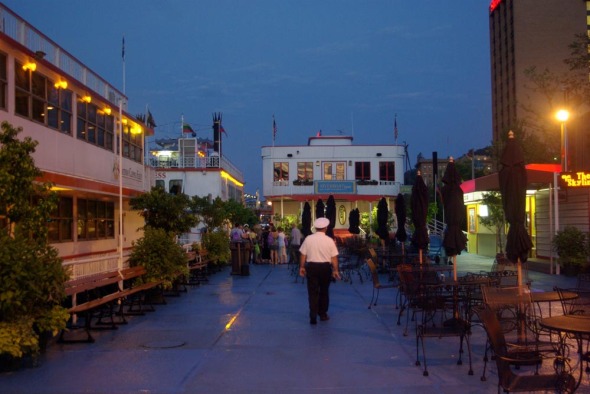 Station Square was once the Pittsburgh & Lake Erie Railroad pedestrian station along the Monongahela River, and today maintains the marble floors, cast iron gingerbread and vaulted ceilings of stained glass windows. During WWII, those windows were painted black so the light wouldn’t shine through; during and after the war the steel mills were running full steam and you may remember photos of Pittsburgh in that day so clouded with smog and sooty air that the street lights came on at noon. It was decades later during the city clean-ups of Pittsburgh’s Renaissance I that the windows were once again uncovered and the building, no longer serving rail passengers, became a multi-use shopping and office site.

2 Comments on “A Taste of Station Square”