A Pretty Tri-color Needs a Home

I’d noticed a new kitty around the neighborhood over the summer, a very unique tri-color I hadn’t seen before. After some investigation (asking the neighbor kids who know everyone’s pets) I discovered she actually lived in the duplex next door to me.

I haven’t had much opportunity to talk to these people, a young couple with a son in first grade and a newborn and a visiting daughter on the weekend, plus a bunch of jobs between the two. It turns out the kitty’s name is Callie, and while she’d always been an indoor cat, the older son racing in and out the door with his friends had given her the idea she could go out, too, and then she began racing out the door all the time. They tried keeping her upstairs, and downstairs, anywhere away from the door, and they tried to warn the kids not to let her out, but she still managed to get outside. 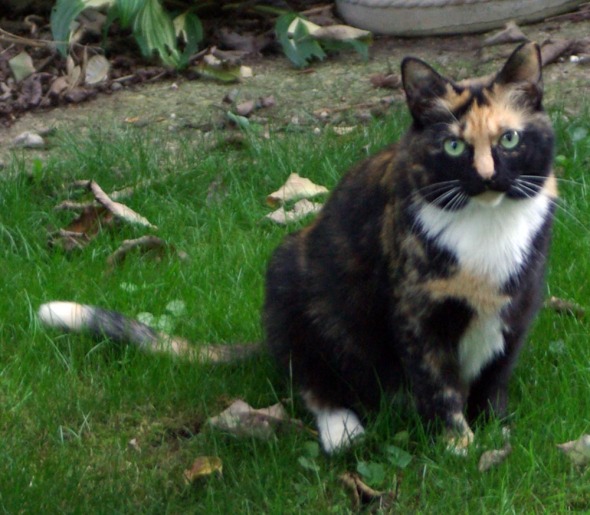 Callie in the grass.

They had actually fallen on some hard times from job loss and, when they found they were expecting, gave up their house knowing it would be too expensive with a new baby. The half duplex was a little crowded so a friend offered to rent them a small house for less than the duplex, and Callie was invited too—that wasn’t the problem.

They didn’t realize until they were at the house painting how much traffic passed the house, and how fast it moved, and the road is pretty close to the front door. Even if they managed to keep Callie contained most of the time, it would only take one time…

The woman came over to talk to me about how frightened she was and that she didn’t want anything to happen to her Callie, but she was afraid to take the risk, and I felt she was sincere—believe me, I’ve been delivered every line there is when someone simply wants to get rid of their cat, but I know with two adults and three kids and four jobs and caring for an infant, no one can keep their eye on everything.They’ll take her with them, they won’t abandon her, but I’d even be afraid to risk it.

Several years ago I fostered two cats for a friend who had lost her house and rented another, then realized her old house had had a vestibule and her cats never got outside. In the new house, because she is slightly disabled and can’t quickly get in and out the door, they could get right past her, headed right for another busy road. She felt she couldn’t risk taking them back, so I helped find new homes for them through one of the shelters.

So Callie is looking for a home! She’s about five years old and spayed and has the typical tri-color personality: “Hello! Hisssss…….”, just can’t decide if she’s happy to see you or should keep you at bay.

And her markings are really unusual—her head, legs and tail are calico, but her torso is tortie. Is she a calitort? A tortico? Not sure, but once you get under the tri-color crust she’s a sweet girl. She also has four white paws and a white tip on her tail. Snowshoe calitort?And a white chest and belly. Tuxedo snowshoe tortico?

If you or anyone you know is interested in her, please let me know. I’d hate to see anything happen to her. I’d love to help, but it’s just not time yet for me to take in another kitty, and my spare cat room is completely out of commission for fostering right now.

Yes, she would make a great photo subject. It’s not time for me to take in another kitty, even as a foster unless it’s only for a day or two.

10 Comments on “A Pretty Tri-color Needs a Home”