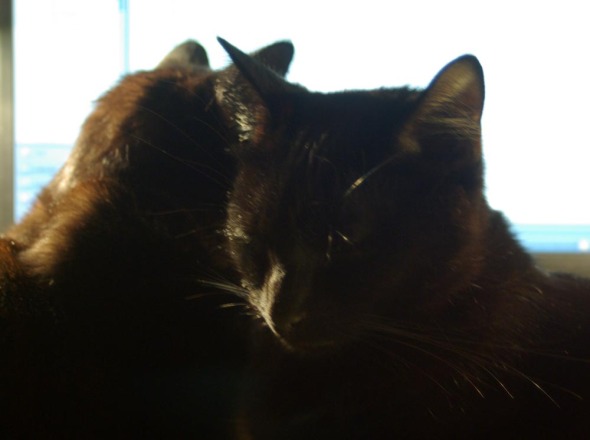 I’m not sure what I wasn’t supposed to hear what Giuseppe was telling Mr. Sunshine because I the rest of it was kind of garbled, but I’m sure I’ll find my extra pair of glasses is missing from the kitchen or some drawing pens from my studio, or perhaps a mousie is hidden in my bedroom.

Or maybe they are talking about my Christmas gift!

Poor Mimi doesn't even get a break to eat.

Mimi, above, arrived in my home on July 30, 2007, with four black fuzzballs who were three days into this existence. To my knowledge, she was about four years old and had had several litters of kittens, though this litter would be her last. Incidentally, this is the Fanciful Four, who are often pictured here, at their inglorious beginnings.

I frequently give Mimi’s belly a little extra rub top to bottom, not because she likes it, but because I like her.

Feline breast cancer is the third most common cancer among cats after lymphoma and skin cancer. In a 2005 study done at the University of Pennsylvania, “cats spayed prior to 6 months had a 91% reduction…those spayed prior to one year had an 86% reduction in the risk of mammary carcinoma development compared with intact cats.” Spaying between 1 and 2 years of age only reduces the risk by 11%, and after two years it doesn’t reduce the risk at all. Actually giving birth to kittens doesn’t change the risk factors, either. The average age of diagnosis is 12 years.

While breast cancer in cats is more common than in humans, it is far less common than it is in dogs, but cats have the highest malignancy rate and the lowest survival rate of all three.

That myth that “it’s good to let a cat have a litter of kittens” has no basis in fact, and can be a death sentence since spaying your cat before it even goes into heat the first time is the best way to avoid breast cancer, not to mention reducing the risks of injury and disease a cat faces while out carousing.

What about all those rescued mama cats?

And those of us who have rescued cats or adopted cats who have borne even one litter would be wise to keep an eye open for symptoms.

Recently, friends of mine rescued a “torbie”, or tortoiseshell tabby kitty, from a warehouse in a grim section of town. She was unspayed and had apparently had several litters of kittens, though who knew what had happened to them.

The urgency to rescue stemmed from her living conditions and the fact that she appeared pregnant at that time. It turned out that she was not pregnant, but may have recently been nursing kittens as her abdomen from chest to hips felt symmetrically lumpy and her stomach was a little bloated; this may have also been mastitis or symptoms of heat. The spay went fine and she was back on her feet in no time, the abdominal abnormalities disappearing completely. They estimated her age was about 4 years.

Despite dodging forklifts and semis, she is both charming and mischievious, acting as if she’s always lived indoors, and teaching the young’uns how to steal food, which had never occurred to any of them. In a cat, charming + mischievious = intelligent and manipulative, and they practically have to hang the cat food from the ceiling to keep her from getting into it and threatening to burst her stripes.

A year or so after she joined their household, one of them felt lumps on her torso/belly when they picked her up and thought the lumps felt “different/odd/new/wrong”. Taking a good guess that this was pretty serious, they took her to the vet and discovered that she had feline mammary cancer. The vet guessed her age at six or seven then, a little older than the first guess. One surgery and a course of chemotherapy later and she was fine, but they’ll keep checking for the rest of her life because she had a little relapse about two years after the initial surgery. [I am sad to say that Callie’s cancer returned and she lost her battle on February 11, 2010. ]

The monthly breast exam for your kitty

That monthly mini-exam is a good practice for any animal guardian to undertake, just running your hands over your cat’s body feeling for lumps or bumps or cuts or any abnormality that has simply shown up. Check for tender spots, look closely for any change in movement, study your cat’s eyes and even smell its breath. Of course, you may end up with your nose surgically removed since many cats don’t care for being handled, especially in vulnerable areas like the belly, but do your best without too much bloodshed.

And especially for those girls, check for any changes in those eight mammary glands, which are usually completely symmetrical and slightly reducing in size from chest to hips. Look for changes in the nipples or any discharge, uneven lumps or swelling and tender spots. At least we humans only have two mammary glands to worry about.

When I started this exam routine years ago, I found a small lump on my Sally’s belly and made a special appointment with the veterinarian to get what I was sure was a horrifying diagnosis. I wrung my cold and trembling hands as my veterinarian felt the area of Sally’s belly I’d indicated, only to learn that it was scar tissue on her spay scar. So, get to know her spay scar, which is usually tiny but may contain a little hardened scar tissue, and it may also be a site of cancerous growth, so check for changes.

Mimi, wonder mom of the Curious Quartet and quite a few others, gets her little exam at least once a week. Kelly, too, was a rescued stray/feral and apparently gave birth to a few litters of little Kellies. I’m not certain of her age, but she was likely between 2 and 3 when she came to me, and she’s been with me since 1997 so she’s in her teens. It’s taken Kelly years to find a certain comfort level with people though she is very friendly, and the regular tummy exam is a little weird for her but she has grown to enjoy it.

For more information on the disease and treatment, reference these two articles: Association between ovarihysterectomy and feline mammary carcinoma, http://www.biomedexperts.com/Abstract.bme/16095174/Association_between_ovarihysterectomy_and_feline_mammary_carcinoma, and Mammary Cancer in Cats, http://www.veterinarypartner.com/Content.plx?P=A&A=2445&S=2

When to spay, and early spay and neuter

It used to be that six months, the approximate age a cat reached sexual maturity, was the best time to spay a cat. There were two problems with this. First, cats often went into heat before this age to the surprise of their owners who thought Fluffy’s biological alarm clock wasn’t set for four months. Second, people wanted to adopt young kittens and were sent home with an assurance of a free or low-cost spay for Fluffy included in the cost of adoption. Somehow, Fluffy wouldn’t get back in time, sometimes never.

Most shelters now spay and neuter cats when they reach two pounds, about eight to ten weeks, and they are not available for adoption until then. They recover quickly and are still cute kittens, frisky and full of fun, and no one needs to worry about their biological clocks.

If you’ve taken in a stray or adopted a kitten who is not spayed or neutered, there’s no question that spaying or neutering is expensive. Here are a few options to help keep it affordable. All programs have an application process with an income level that determines the final price of your cat’s surgery. In many cases the surgery alone can be done for under $50.00.

In Pittsburgh, you can contact Carol Whaley of the Low Cost Spay/Neuter Program (LCSN) at Animal Friends at 1.800.SPAY.PGH or cwhaley@ThinkingOutsideTheCage.org or on their website at www.thingkingoutsidethecage.org.

The Western Pennsylvania Humane Society has a three-level program that includes spay/neuter as well as vaccinations and microchipping, detailed at http://www.wpahumane.org/Spaying.html. Call the  North Shore Shelter at 412-321-4625 X 157 or email questions spay.neuter@wpahumane.org

The Animal Rescue League sets aside one day a month for low-cost spay and neuter for which you must make an appointment, and they fill up fast so don’t wait. The information can be found on their website at http://www.animalrescue.org/cms/name/Veterinary+Clinic+Spay+and+Neuter or call 412-661-6452 x 211 or x223.

Many shelters in the counties around Allegheny also offer deals like those above.

Outside of the shelters, the Spay Neuter Clinic at the corner of Frankstown and Rodi Roads always offers low-cost spay and neuter as well as other basic services. Call 412-244-1202 for information and an appointment, or visit their website at http://www.spayaz.com/Home_Page.html. The practice is actually one of several which originated in Arizona specifically for the purpose of low-cost spay/neuter, so most of the information is about those offices, but you’ll find the Pittsburgh office with a phone number, and, most importantly, you can download their price list.

And outside of the Pittsburgh area, you can do a search on Low Cost Neuter and Spay at http://neuterspay.org/ (search by city, not zip code, it’s more successful), Love That Cat at http://www.lovethatcat.com/spayneuter.html, or Spay USA at http://www.spayusa.org/.