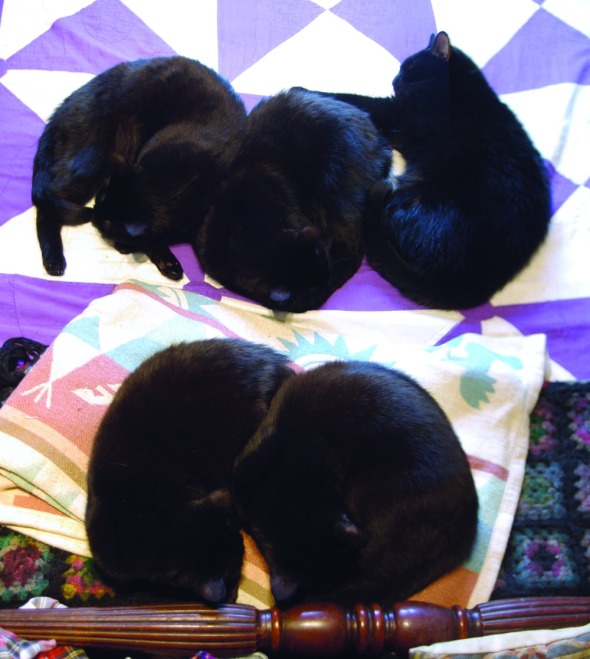 The effects of a dark, rainy morning: five black cats neatly organized in two groups to sleep on the bed.

After taking up most of the space on my desk this morning, they all disappeared upstairs and tried to get me to lie down with them when I went upstairs. Later, this is what I found, and they didn’t even open an eye or flick an ear when I got my camera and walked around the room, trying to get the best angle on a shot of them all. I turned on all the lights in the room in an effort not to use my flash.

But they did make me think of folded, sorted laundry ready to be put away.

Strewn on the bed. 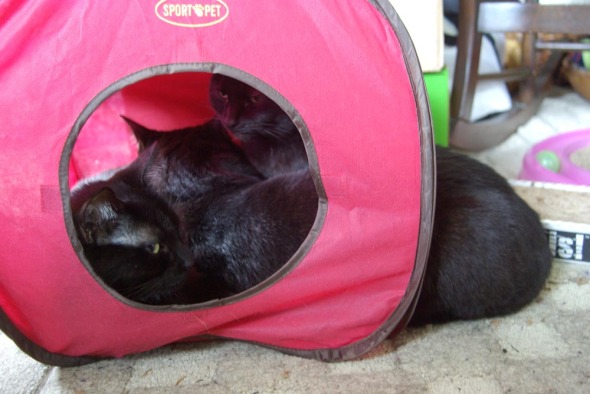 How many black cats can fit in a cat cube?

Three, if Giuseppe sticks his butt out the back door!

Jelly Bean, down here in the lower left, was in there first, then his mom, Mimi, whose face you can see in the upper right of the opening, was cuddled with him.

Then Giuseppe decided he wanted to be in on the party too, and crawled in as far as he could and laid down, using JB as a pillow; you can see the back of Giuseppe’s head in the middle of the opening.

Poor Mimi had to sit up or be smothered by Giuseppe’s big hug.

This poor cube has only been here for six days and it’s taken a heck of a beating! When it isn’t full of big black cats, it’s being used as a big soccer ball as I find it all over the room, upside down, sideways, and yesterday I found Mr. Sunshine lying on top of it all flattened beneath him. We’ll see how long it can last with this type of treatment.

This was a challenging shot: I could barely get any distance between my lens and the cube, and three black cats meter pretty dark to begin with, then put them inside a red object and it was all I could do to get any detail at all. The flash lit up the cube but darkened the inside, so I had to use light streaming in from the window off to the side. Well worth the dozen shots it took to get one… 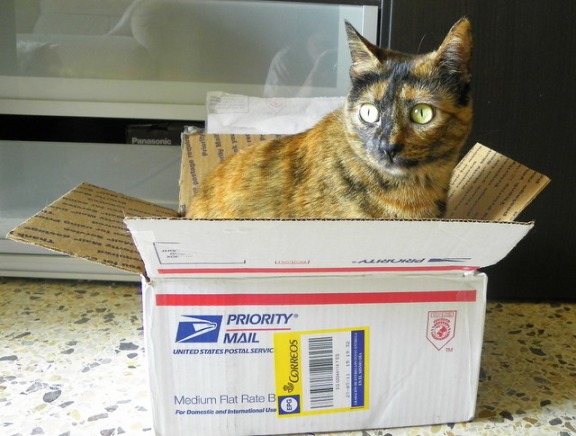 Thanks to “The Goddess” through sales of the Tortie Girls tees to benefit Japanese animals after the earthquake and tsunami, we met a new friend and a wonderful connection with a group of people who love and assist animals in Barcelona, Spain.

Before the internet allowed greater communication, many of us who rescued animals and worked with animal welfare felt isolated and even overwhelmed in our concerns for animals, not realizing how much work was being done by hundreds, thousands, millions of caring people even in our own towns and cities. Now, even though we can’t always speak the same language, we can form a bond with people all over the world who love animals and do the same work as we do in rescuing stray animals, running spay and neuter clinics to prevent overpopulation, educating owners about veterinary care and lobbying for legislation to see that all animals are protected from abuse and neglect and receive a minimum of care that assures their health.

It’s so exciting to see this animal welfare revolution happening all over the world! Who knew that all the work everyone had done in cities all over in decades past sowed the seeds for today’s animal welfare organizations in nearly every country across the globe?

And Rosa, from Barcelona, Spain, bought tee shirts from me in Carnegie, PA, USA to benefit animals in northern Japan. How cool is that?!

She was so excited about them that she composed a blog post, Camisetas fantásticas con las que ayudas al Animal Refuge Kansai, including photos of her own cats, Llum and Kiara, helping to open the package and inspect the contents. The two photos used in this post are her two cats, used with permission.

She also covers many animal-oriented events and stories of interest in her city—most recently she has an article from her visit to the 29th Annual Barcelona International Comic Fair which this year featured felines in comics and Jardinet dels Gats, an organization that has been assisting feral cats in Barcelona since 2005.

And I apologize to Rosa for taking so long to post this—I had intended to translate a few things but in the interests of time decided to just let Google do a basic translation.

Here’s a link to the entire blog in Google translation

And we think Tortitude is understood in any language!