Sleeping on the bed on a warm afternoon, that’s a great way to spend the day, especially if you’re a cat.

Cookie, working her way off the edge over here, joins Mimi, curled on the other side, and Mr. Sunshine being used by a pillow by Jelly Bean, letting loose a big yawn.

They’ll all have to consider moving soon because the sun will come in the window for a while. I could pull the blind down, but they’ve been sleeping all day and I miss their company!

Fromage stubbornly wouldn't come outside for her photo op.

I spent Saturday working in a friend’s yard and being supervised by her cats. And what a pleasure it was to see them again—two of them had been at my house at one time.

Fromage supervising from inside.

Above is Fromage, who wouldn’t come outside once I had my camera handy. For a lot of the afternoon my hands were busy and full, and Fromage was twirling around and leaping out to appear in front of me as a surprise, but decided to be shy with the camera. Still, she looked awfully cute when she sat inside the door and watched me.

Fromage was rescued by my friend as a neonatal kitten, so she brought her to me to be bottle-fed and raised until she was weaned and ready to go back to her forever home. You can read about Fromage in this article, which contains links to others about Fromage: A Little Baby Foster Kitten. 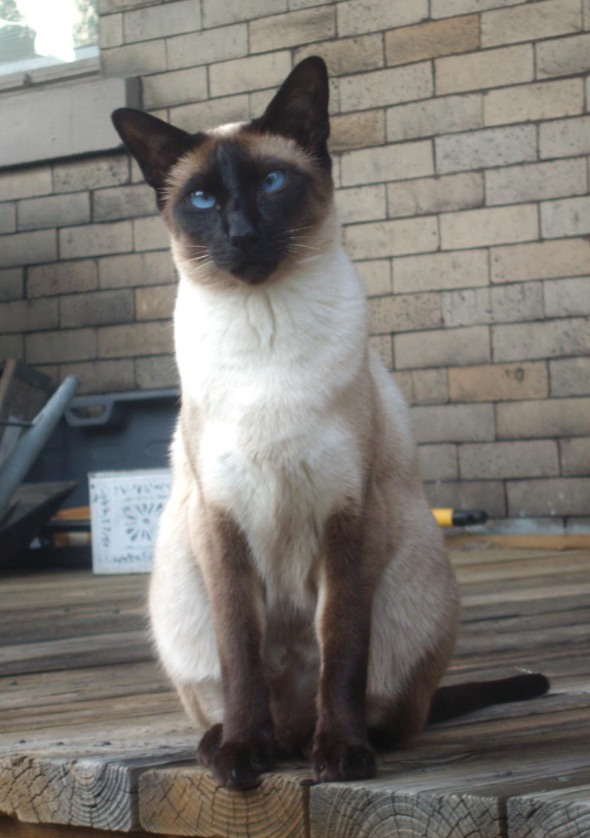 Also acting in a supervisory capacity was Cranberry, a full-blood Siamese princess, who never lived with me but who I know well. She moved around on the porch so that she could watch me work around the yard. Those blue blue eyes look like spring flowers all on their own.

Cranberry on her chair.

When she grew bored with my labors, she gracefully lept upon her wicker throne for a bath and a nap.

Mr Peach lifts his head for his photo op.

And, of course, there was quiet, mellow Mr. Peach. He does open his eyes now and then, but he’s not impressed with a photo op.

Mr. Peach stayed with me for a few months in 2007 when his family wanted to figure out if his presence had an impact on their allergies. Apparently they were no different when he was not in the house so he went back home, but I still get to visit him now and then.

It’s always nice to visit a friend who lives with cats, especially if I have some connection with the cats, though that’s not necessary for a good visit!