← A Package to Colborne
We’ve Shipped Out the First Few Copies! → 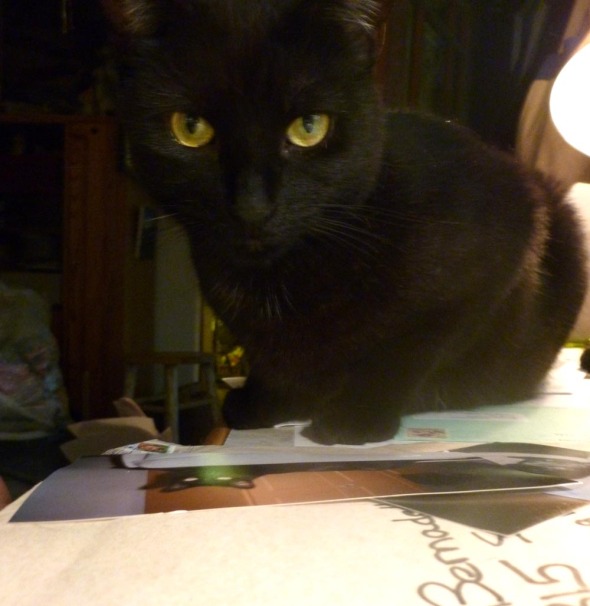 Can we move to Colborne?

He is convinced this is Miss Daisy Marguerite and not some fat old cow-spotted tomcat who is posing as un chat belle femme noir* just to get some attention on the internet.

Let’s see Giuseppe’s reaction. I found the envelope, came in the door and went directly into the kitchen where Giuseppe was having a drink of water and bathing: 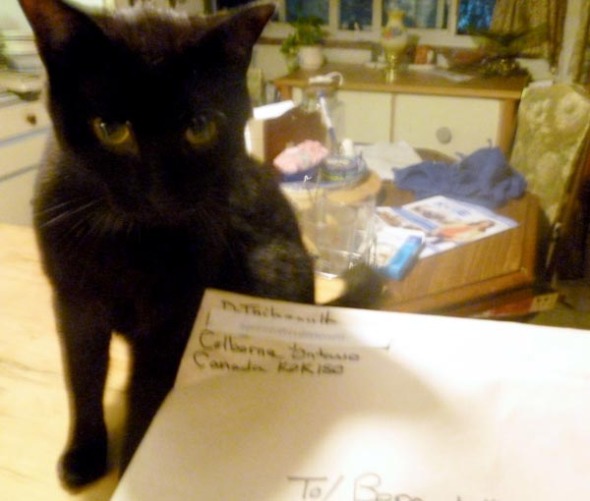 Giuseppe asks me to translate human.

Is it really my letter from Miss Daisy Marguerite? 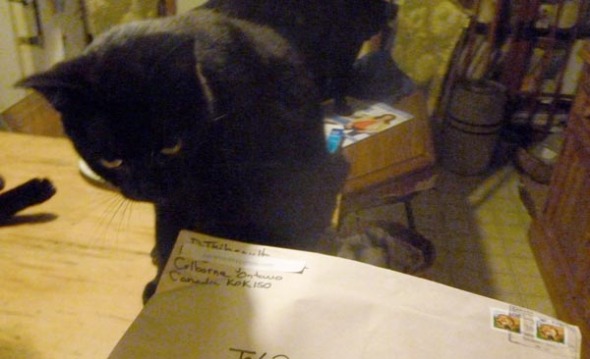 I just get a wonderful feeling from it!

Since I can’t read, does that say “Colborne”? 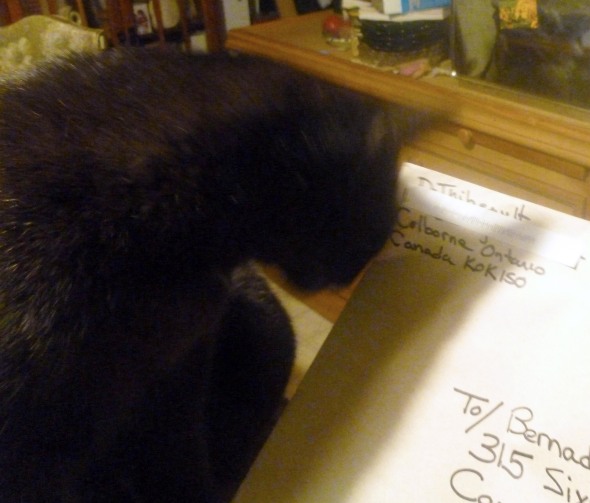 Then his mom realized she didn’t have a letter opener, so we moved to the desk. 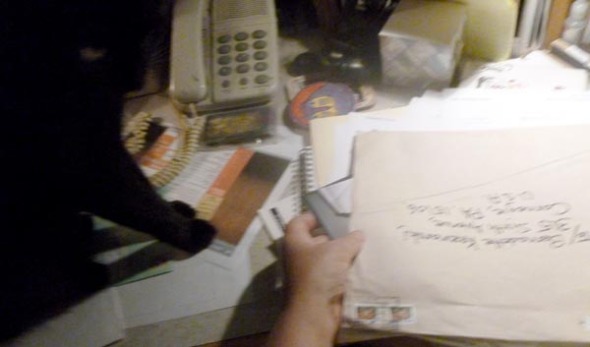 Giuseppe watches me take the photos out.

Giuseppe watches intently as I remove the photos of Miss Daisy from the envelope. 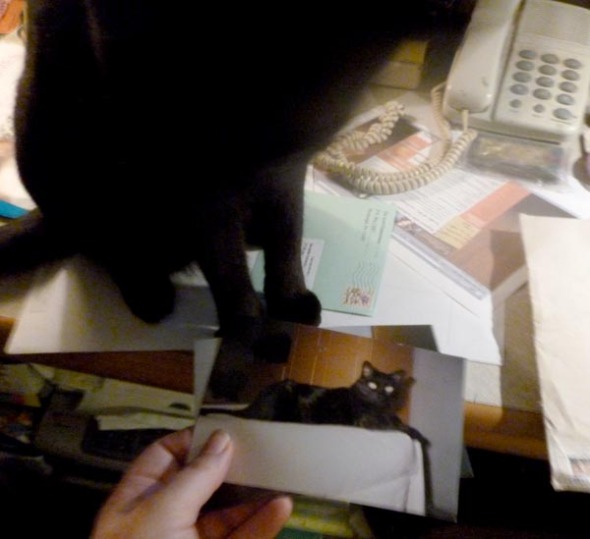 She is indeed a lovely black cat with nice feminine curves! 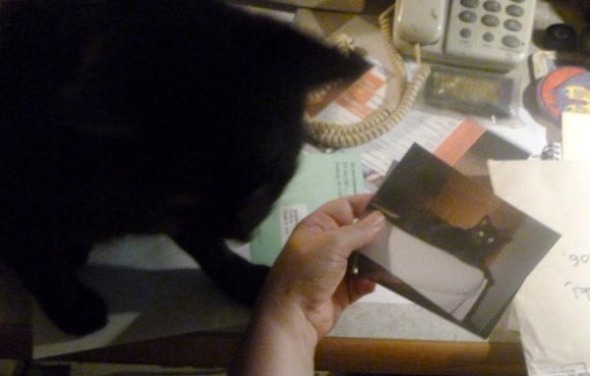 She has big, beautiful eyes!

“Put it down so I can look at her…” Giuseppe whispers. 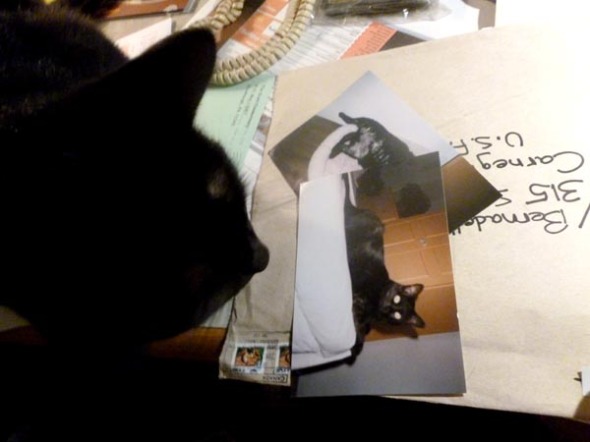 She is so dignified! 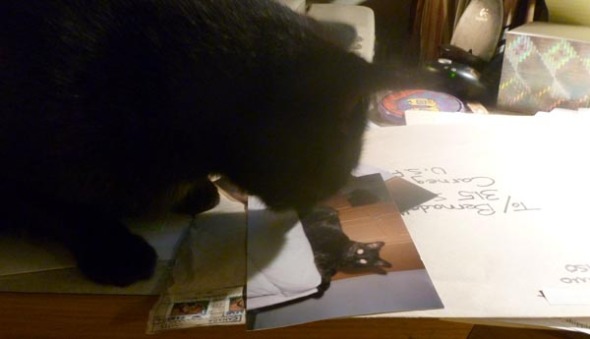 I think I detect a whiff of her scent!

“She has touched this photo, I can tell…” 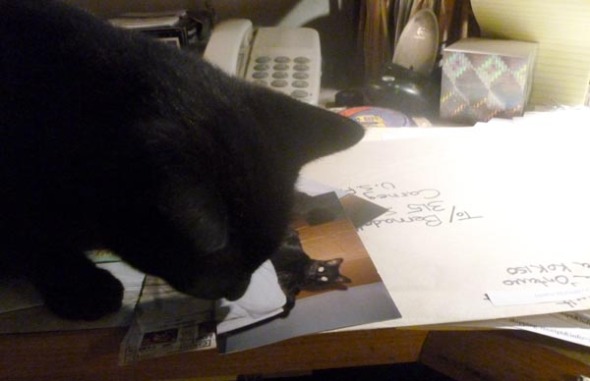 I will memorize her lovely image.

“I will study this photo endlessly…”

I think my guy is in deep. But I also think Miss Daisy is a lovely lady cat! 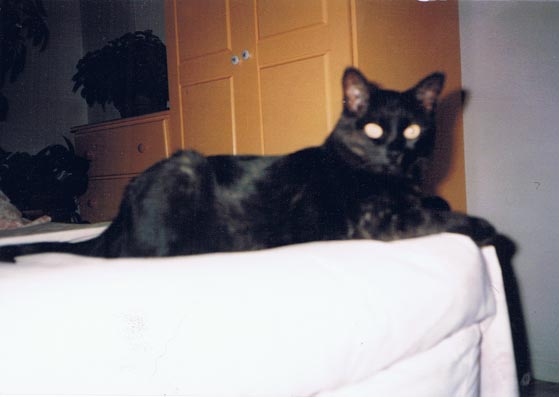 And here she is in her fleece bed imitating “The Goddess“, which is how her mom found me and led her to Giuseppe!

Miss Daisy as "The Goddess"!

So I am satisfied that Miss Daisy just might be a suitable love for my sweet melodramatic romantic Giuseppe. Guess he and I will have to brush up on our French.

His brothers are finding all this quite amusing.

*”Yes, the lady is beautiful, my love, my love…”, hope my basic Italian is okay; I picked it up from Puccini and Verdi!

*Hope my French is okay too—just kind of making that up!

The Mystery Deepens: A Photo of Daisy Marguerite

8 Comments on “The Envelope, Please?”