Mom, What Are You Doing Down There?

Mom, why are you lying on the floor down there?

You have that big black thing on your face again.

You came running up the steps talking to me, and then instead of petting me you laid down on the floor on the landing but you’re still talking and moving that black thing around.

Sometimes I don’t know what to think. Sometimes thinking is too hard anyway, but that’s another story.

I think I’ll just have a good laugh and go back to sleep. It’s too hot to think about it right now.

Jelly Bean has a good laugh at my expense. 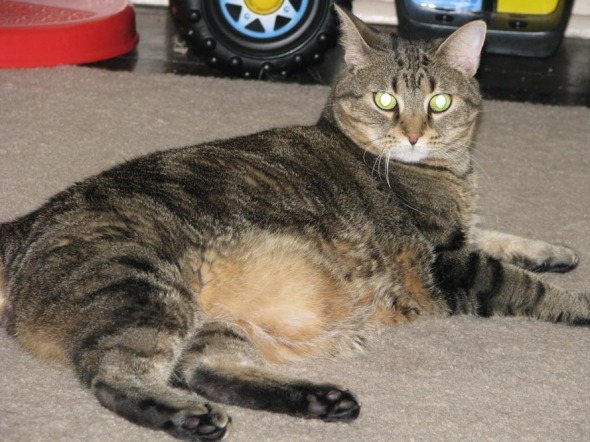 They were adopted together as kittens, and have always been together. They are so similar, it’s hard to tell them apart! Their household is changing and all three need homes. It would be so wonderful to keep them all together.

Here is what their current persons says about them:

They are somewhat shy but once they warm up to you are completely lap cats. Good with kids (although a bit shy with them) and with other cats. Give them a windowsill and some sunshine and they are happy boys. Very affectionate. Love to snuggle.

Does anyone have room for a matched set of three tabby boys? Please contact their owner: ksulkoske@gmail.com

Seeing Mimi settling down near Peaches’ portrait reminded me of another instance of a cat communicating with one of my portraits.

I usually keep in touch with the family for whom I’ve created a portrait. We’ve often done quite a bit of work determining the exact posture and scene for a portrait, gathering images and sometimes I paint purely from visualizing what my customer is describing. Also, nearly half my portraits have been memorials, created either after the animal has passed or around the time of its passing, and working out the details of the portrait include working through a certain portion of the family’s grief.

Besides that, we came together to do their portrait because we love animals, and that’s a natural friendship. I often hear news of the household, the arrivals of new animal companions and the passing of others, and stories of the household in general.

In the months after I finished Cooper’s portrait, I received a call from his family to tell me the sad news that they had lost Patches to complications from polyps she had developed in one ear.

Patches and Cooper had been best buddies. Cooper had passed about a year before I painted his portrait, and when it was finished and we hung it over the couch, I met Patches and the other kitties they had rescued and adopted, inspired by their love of Cooper.

Soon after, Patches showed signs of illness, but it took a number of tests to find the polyps. They were inoperable, and while her family eagerly tried a number of standard medical treatments as well as naturopathic treatments, all too soon she was losing her battle.

They told me that just days before Patches died, even though she was weak and declining quickly, one evening she climbed up on the back of the couch, sat up and gently touched the glass over Cooper’s face in the portrait, looked at him for a short while, then carefully got down.

“Was she saying, ‘There you are,’ or ‘I’m coming, I’ll see you soon,’ we don’t know,” they commented. “After that, she seemed to accept what was happening to her.”

Anyone who has lived with animals knows that they communicate with us as well as with each other, and that they experience the same range of emotions as we do, including love and grief.

When I create a piece of artwork, any subject, I not only work with the images I have and the medium I’ve chosen, but I also instill what I would be sensing if I was standing in that spot, and what I’m feeling about the subject, all as if I was experiencing it in that moment.

When the subject is one of my animal portraits I also consider the relationship between the animal or animals and their family while I’m working, either through observation or from what they’ve related to me.

In the case of Cooper’s portrait, I had received a call from someone saying he had one photo of his girlfriend’s cat who had passed the previous year and he’d like to give her a portrait of him for the anniversary of his passing and her birthday, which were close—and also a little over a month away. It was possible to paint and finish, mat and frame a portrait in that time, but as I still worked a day job with a lot of variables I usually wouldn’t risk it, except that he had given the same photo to another artist who had not gotten the portrait done and still felt strongly that the portrait was what she needed to have.

This could be tricky—not only would I not be able to meet Cooper, nor would I be able to meet his person or see the household or have any other connection with my subject other than this one photo, and the portrait was fairly large, 22″ x 17″. But though he only had the one photo, he was generous with stories about Cooper and the household, and very much emotionally invested in the project himself.

We did meet the deadline, and in that concentrated period I spent a good bit of time considering what he’d told me about Cooper and the household.

I know that depth was invested in the portrait itself, showing in a physical manner—I always say that I paint until my subjects look back at me—and perhaps in a spiritual manner as well, recognizable by both humans and animals. My families will tell me that, though I’ve often thought it was the confused musings of someone who stayed up too late and spent too much time alone with my painting.

Cooper’s story is this: 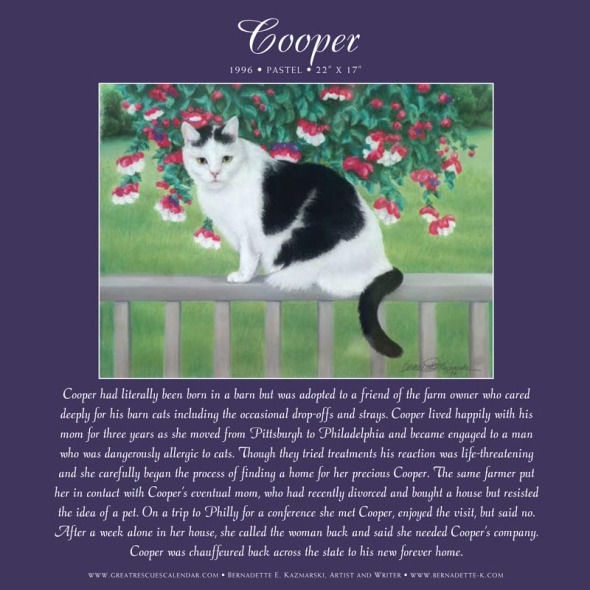 Cooper had literally been born in a barn but was adopted to a friend of the farm owner who cared deeply for his barn cats including the occasional drop-offs and strays. Cooper lived happily with his mom for three years as she moved from Pittsburgh to Philadelphia and became engaged to a man who was dangerously allergic to cats. Though they tried treatments his reaction was life-threatening and she carefully began the process of finding a home for her precious Cooper. The same farmer put her in contact with Cooper’s eventual mom, who had recently divorced and bought a house but resisted the idea of a pet. On a trip to Philly for a conference she met Cooper, enjoyed the visit, but said no. After a week alone in her house, she called the woman back and said she needed Cooper’s company. Cooper was chauffeured back across the state to his new forever home. 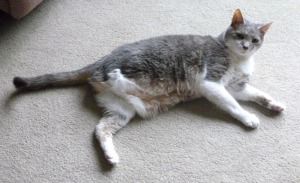 Each family for whom I have created a portrait also has a continuing story and so much to tell, like this story of Patches and Cooper. This family has continued to rescue other cats, including Simon, and I’ll have more stories to tell about their family of cats ranging from those comfortably indoors to those who visit the feeding stations outdoors and use the carefully constructed shelters in the winter.