There they sit, butts on the cabinet and paws on the windowsill as if it’s a table, watching the backyard and the neighborhood beyond on a hot summer afternoon, just like two old “studda bubbas” sitting on the “stoop” looking “ahtside” (they are Pittsburgh cats after all). I’m tempted to put babushkas on them. People from Pittsburgh will understand, for the rest of you, translation is at the end. You’ll still be able to understand Giuseppe and Mewsette’s conversation.

I think there’s a little bit of a breeze here.

I think it’s just the fan.

Look, is that the little gray kitty who lives on the corner? I haven’t seen her in a while.

Yeah, I thought maybe something happened. We haven’t seen a few of the cats we used to see.

Maybe it’s the raccoons who visit at night. We always hear them out in the garden. I’d keep the heck away from them hearing the noises they make. They sound like they’re killing each other, but they tell us that’s just how they talk to each other.

Do you believe our mom used to be out there all the time?

You wouldn’t be able to see her! I try to get her to tell me stories about it, but she doesn’t have much good to say.

Do you ever think about going outside, Giuseppe?

Sure, I think about it all the time. I love being in here and being with all of you and getting baths from my Mimi mom and hanging with our human mom and I’d never want to give any of that up. But part of me wants to feel the dirt beneath my paws, sit under that forsythia and wait for a chipmunk to run past.

I remember the time you did get outside, when Kelly accidentally pushed the screen out of the bathroom window and you were both on the deck roof. You didn’t enjoy that so much, and you couldn’t get back in until mom climbed out the window and got you.

Well that wasn’t dirt! I was scared up on the roof. I couldn’t see the ground from up there, everything was just green. Kelly didn’t mind at all, but most of the time I can’t figure her out anyway. Do you ever want to go outside?

I think about it all the time, but when mom holds the basement door open for me and I’m ready to run outside into the sun, I just get scared. Mom even carried me out a couple of times when she was in the garden, but I had to go back in.

Oh, look, the birds are back. Their babies are nearly all grown up, no more of that squawking and wing flapping to be fed!

How do they eat that stuff? I don’t find it in the least bit interesting.

Did you try it?

I sniffed it. It doesn’t smell like anything at all. Give me cat food!

Mimi mom told me the birds used to eat her food when they fed her outside. She had to fight with crows and blue jays to get her dinner, and sometimes she just went hungry because they have big scary beaks and they are almost as big as her.

You know, I don’t always believe everything our Mimi mom tells us, especially about the time when she lived outside.

Our cat mom would never lie.

Never! But sometimes I think she stretches the truth a bit.

Well, I’m not sure a blue jay is as big as her, at least not the ones we see up close, but they do have big beaks and they are really loud.

I guess we’ll have to ask her some time.

Okay, a “studda bubba” is a term I grew up hearing and which we used in a, well, less than affectionate sense but not terribly mean. It’s a misquote of “stara baba” which is Polish or Ukrainian or Serbian or—they all claim it—for “old lady” though the lady would be ugly in that sense of the term. What did we know then? We never used it in a mean way. A “stoop” isn’t particular to Pittsburgh because lots of cities have a little raised step right outside the door that’s a convenient height to sit on if you don’t have a chair out there, but many people call it a doorstep where we still call it a stoop. The word “ahtside” is “outside” spelled phonetically for the way we pronounce it, and it’s a difficult linguistic bend to give up, even after years of trying to work it aht of your system. Technically, Giuseppe and Mewsette would also be speaking in a foreign language—I grew up among bilingual people who learned English right alongside their parents’ native tongue be that Polish or Ukrainian or German or Italian—and often the conversations of these gatherings on the stoop were conducted in the language that felt most natural. Giuseppe and Mewsette, of course, were speaking feline. It’s good to see my cats carrying on the tradition.

Dreamy and Whispurr lost their mom and need a home.

Two lovely 13-year-olds have lost their mom and need a home. Their person’s brother and sister-in-law are keeping them, but they have allergies in the household and other pets.

My Peaches and Cream came to me in much the same way—yes, that Peaches!

The girls need love and understanding after losing their mom and their home. Here is what their caretaker says of them:

“My sister-in-law recently passed away unexpectedly and she had two Scottish Folds cats that were her “babies” and are now in need of a loving home. They are two female litter mates (a couple weeks apart) who were with her since they were kittens and are now approximately 13 years old.

“They have been house cats all their lives and pretty much with her exclusively. They are current on their rabies shots and as far as we know they are in good health They are really in need of someone to love them. The grey one is Whispurr the white one is Dreamy. Our family is unable to keep them due to allergies and already having other animals. 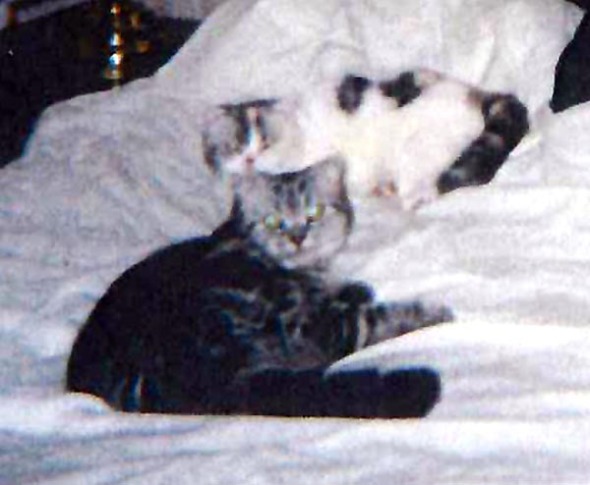 They have always been together.

“We did place them with someone in June but the person ended up not being patient enough, and did not keep them. They will need to be with someone who will understand what they have been through (loosing the only “Mommy” and home they ever knew). In other words, they need time to learn how to trust. They have never been apart nor around other animals.

“We have contacted all the agencies and they cannot help…they are all so overwhelmed. Please feel free to pass this info to anyone who may have room in their heart their lives to give these little girls a new home. My info is listed below.  Thanks much!

“Please let us know if you can help…we are running out of time and options..we really don’t want to put them down.”

I have sent this to Scottish Fold Rescue, Inc., and am awaiting an answer, but if you can think of any options for these girls, please pass them along to their caretakers:

Don’t dismiss a kitty because she’s older! I had five wonderful years with Peaches that felt like a lifetime, and these girls are two years younger than that.