← Has Your Cat Been Sending Messages Today?
A Summer Afternoon →

Hoping for a Miracle 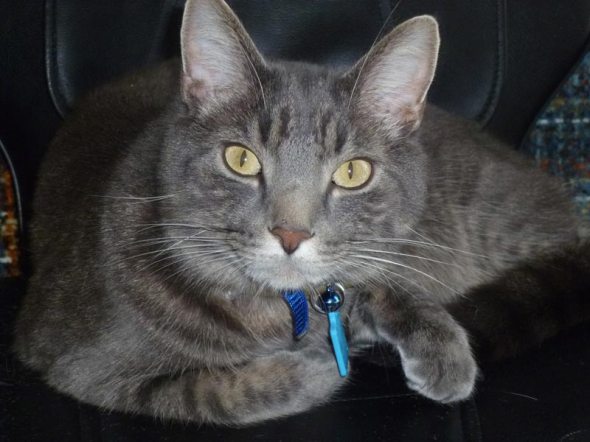 Handsome Stripesy is looking for a home. He’s a big sweetheart, a real cuddler, never a hiss or growl in his life.

He’s also looking for a cure for his little…problem. Apparently Stripesy has a urinary tract issue that hasn’t responded to medication or diet, and Stripesy’s people have spent just about all they can on prescription and premium quality diets and various antibiotics, pain relievers, mild sedatives and other medications. They desperately want to find someone who can adopt him and carry on his treatment.

Stripesy was one of a litter of tiny kittens living outdoors as strays who apparently crows were attacking when a little girl found them. The kittens were rescued and the person who adopted Stripesy originally went for one of the other kittens, but ended up taking home Stripesy as well.

He is otherwise a healthy four-year-old, neutered, up to date on his shots, and microchipped. His people will be glad to provide vet records and tell you all about him.

I know his people have worked hard on Stripesy, and that urinary issues can sometimes take a good bit of time and experimentation with diet and medications to get under control. I’d really love to help them find a home for Stripesy where someone can help a really nice, loving kitty have a good life. Please comment on this post or on Facebook if you think you can help Stripesy and I’ll put you in touch with his people.