And the Affaire Continues

Giuseppe shows off his card and message from Mlle Daisy Marguerite.

Giuseppe received a card from Mlle Daisy Marguerite with another photo and a personal note!

The last letter was addressed to me and actually contained some correspondence for me, but this one…this one was address to Giuseppe from Daisy and was all about the two of them.

I showed Giuseppe the envelope and read the addresses to him. He deeply breathed in the scent. 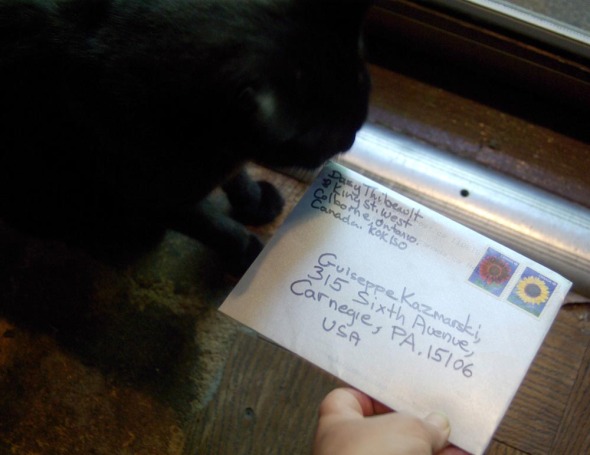 Giuseppe inhales deeply of the envelope.

When he was done inhaling the essence of Daisy Marguerite, he asked if we could open it.

The card was humorous—a large black cat propped up in bed surrounded by books.

Giuseppe, perhaps she’s telling you what kind of gentlecat she’d like to spend her time with You don’t read yet, do you, Giuseppe?

I’m only four. Did you read when you were four?

I think your playboy days may be over Giuseppe. Somebody needs to settle down.

Giuseppe admires his card with a nose tap on the corner.

There she is, isn’t she beautiful?

Mlle Daisy Marguerite on her antique wedding ring quilt. Is that a hint?

And she wrote on the back of her card.

Read the continuing love affair between young Giuseppe and his Canadian love.

The Mystery Deepens: A Photo of Daisy Marguerite

A Package to Colborne