← Some Serious Thinking
At the Top of the Stairs →

This magnificent cat was rescued and originally placed with someone who unfortunately not only let him out, but literally kicked him out, causing a permanent injury. Felix found himself back with his original rescuers who kept a registered rescue for cats in their home.

His forever family had recently lost one of their three Persian cats, long-haired of course, and with tabby markings. Waiting a respectful time after the loss, a friend at work told the story of Felix, the big, gentle long-haired tabby who truly resembled a Maine Coon cat; one day soon after there was a photo of him left on the desk. The gentle hints were well-timed and effective and soon they traveled to meet him, won over the skeptical rescuer, and brought him home.

About Felix’s mom and dad, serial adopters and rescuers 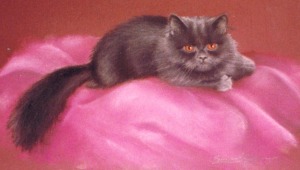 Both Felix’s mom and dad had grown up with pets but those animals had always gone outdoors and as a young married couple living in an apartment they were sure a pet wouldn’t be happy. A friend had Persian cats and in visits they were so impressed with the cats’ looks and personality that they adopted, over time, three of them. 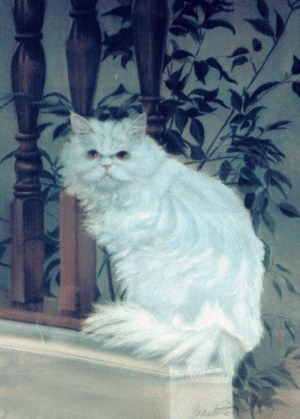 I first met them years later after they had lost that first Persian kitty, Flint, and he became one of the first portraits I painted the year I began this business in 1993. I also met Scout and Cameo and painted their portraits in time as well; Scout is the tabby Persian kitty mentioned in Felix’s story, above.

Felix was their first mixed-breed rescue cat. They had been so impressed by the Persian cats they met and lived with, and while they moved from an apartment to a home and didn’t need to be concerned about space, they also each worked long hours and traveled frequently. The Persian cats they adopted from their breeder fit well into their lifestyle and they weren’t sure about taking on a shelter or rescued cat whose needs they might not be able to meet. Until Felix, that is. 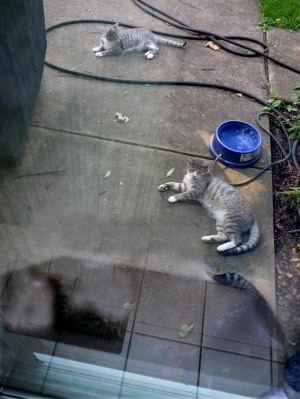 Since Felix they’ve adopted several rescued cats in about the same way as Felix—photos passed around the office, or a flyer, or an e-mail with a story. In addition, they’ve rescued a few of their own from the outdoors, taking them in, getting veterinary care and finding homes for them, and also feeding, spaying and neutering a parade of outdoor cats.

When I visited there were two rescues lounging indoors and four cats who they fed outside the door on the patio who had been spayed and neutered through the Homeless Cat Management Team, a TNR program based in Pittsburgh. I was not surprised to see there was even a water bowl that could be heated for winter use. After a recent visit to them I wrote about their little outdoor family.

Felix, detail of his face.

Felix was a natural model, a big, confident cat who knew just how to pose. I took a number of reference photos when I visited to be used for details, but this portrait was modeled after one shot I particularly liked for the lighting and the minimal details in the background.

It is not unheard of to find a breed cat living on the streets, but most often the ones who appear to be a breed simply have a majority of breed traits pulled up from their genetic history. Maine Coon cats are very popular for their mellow personality, and aside from being very large they don’t look exotic as many other breed cats do. I’ve seen people call nearly any long-haired tabby cat, or just a big tabby cat, a Maine Coon cat. Yet he did have many features and the demeanor of a Maine Coon cat, and I believe a friend of his peoples’ who was a breeder looked him over and said he certainly looked like one. There’s no way to tell without genetics, but when I met him, I certainly sensed the traits I associated with Maine Coon cats—not just a big cat, but a big presence, and even with the gentle demeanor, a sense of the wild in them. I loved watching Felix walk on those huge feet padded with so much fur.

Unfortunately, Felix didn’t live too long past the portrait, and they only had six years to enjoy his company, but after his horrible beginnings—no one knew how such a nice and handsome cat ended up on the streets—at least he spent his last few years with two of the best people any cat could hope to find. 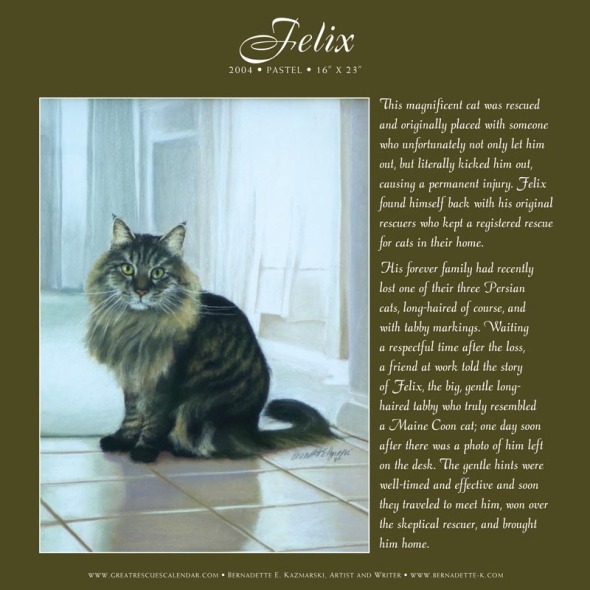 Read other stories about cats and their rescuers from Great Rescues.

There Was Just No Other Kitty After Samantha

The Cat of a Lifetime

A Bridge Between the Ages

Irina and Isis, Saved from the Flood

Leave a Reply to Gathering Portraits and People: My Book Signing and Art Exhibit « The Creative Cat Cancel reply