← The Two Senior Scottish Folds Have Found a Home!
Kitty in the Courtyard →

The Portrait That Started it All 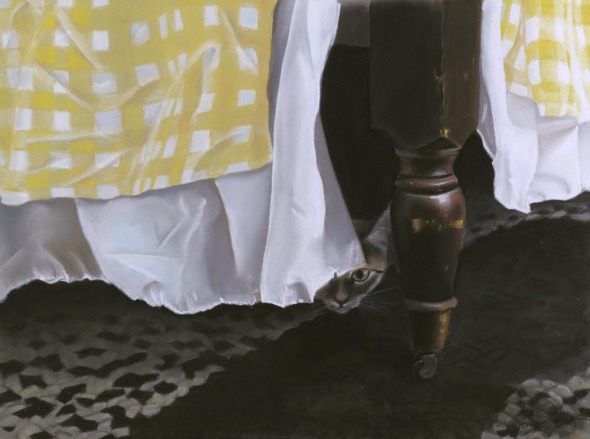 One night in early April, 1988, still with patches of snow on the frozen earth, a very small, very pregnant cat sang a little song to me out in the alley, politely but confidently asking if she could come into my home to give birth to her kittens. Of course, I said “yes”, and ten days later I witnessed the entrance to life of four independent and individualistic progeny. The last one born stayed with me after the others were adopted; the “runt of the litter”, the little cat with the big attitude, a torbie who loved only me, my Fawn.

This was my first full-color portrait of one of my cats, and she led the way to all the other commissioned portraits of animal companions I’ve done in the past 20 years.

Creating the portrait, this first one just for me

And so it was, though I had no idea at the time that I was launching a new career. And looking at this painting even today, I have no idea how I did it then. I didn’t have the skill, insight, ability to visualize or any of the ephemeral abilities I have now, but I managed to see the essential details and put them on paper.

But I didn’t set out to create a portrait—that was all in the future—and, for this last time, with the knowledge that I never needed to show it to anyone, ever, if I didn’t think it was acceptable.

I painted this in 1989, just about three years after I began seriously working my way through learning to draw simply by drawing all the time, after work at night and on the weekend. It is painted in pastel, but when I began I hadn’t even purchased real pastels yet, I was still working largely in colored chalk. I purchased an inexpensive student set of pastels and continued working with the new colors, then purchased individual pastels and pastel pencils, then just got a part time job at the art store because everything was so darned expensive and I was hooked. 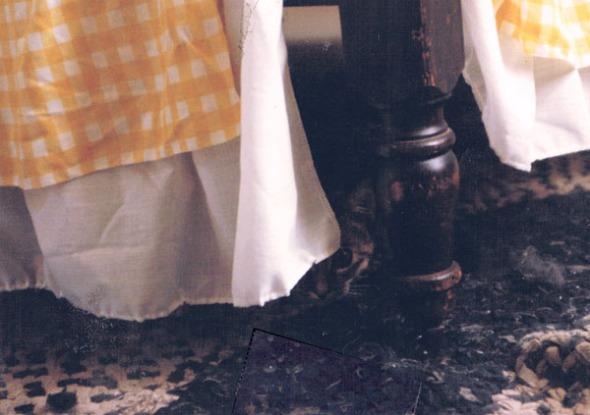 The reference photo for "Waiting for Mom"

I remember looking at the photo I’d taken the year before when Fawn was a kitten and thinking “that would make a nice painting”—so funny to think of now as I look at other photos every day and think the same thing, 23 years later, and then I’d hardly even call myself a beginner. The nerve of me! Of course, I adored Fawn being excessively cute when she ran under the bed and peeked out, waiting for me to walk by so she could pop out and grab my ankle, and my inspiration was just as much to share her and her antics as it was to produce a good painting. Really, that hasn’t changed in all these years.

But I was also intrigued by the “white” dust ruffle, seeing for perhaps the first time all the colors that make up a true white object in a painting. I really, really wanted to paint this, fairly large, and in color. I wasn’t visualizing it as realistic as it is, more impressionistic was the style I had in mind. I can see the influence of Mimi Vang Olsen, and Lowell Herrero, two artists whose feline images were very popular then, appearing on many gift items I received, and I was influenced by the flattening of some angles and simplification of pattern.

At that time I found it difficult to loosen up my style. I had worked on my skills just in basic drawing to the point where I felt I had a good bit of control over what my hands were doing, but the image I produced no longer looked stiff or forced, at least most of the time. But I loved the Impressionists, and I wanted to paint like that! 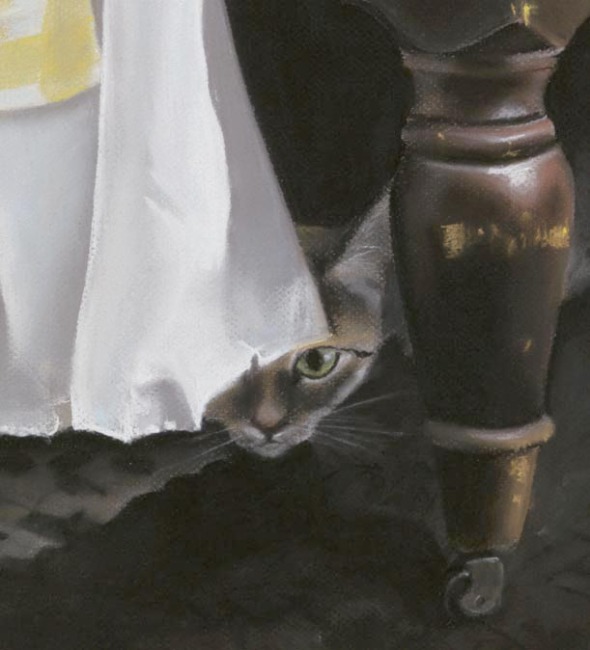 Detail of "Waiting for Mom"

It wasn’t to be for this painting, and in many ways I’m glad. This painting took me months, in part because I was intent on matching the shade of yellow in the gingham bedspread and also quibbling with myself about all the details that weren’t “perfect”, such as the nicks and scratches on the bedpost, the wrinkle in the rug, and, of course, the wrinkles in the dust ruffle and bedspread. I was embarrassed at my housekeeping, but an artist friend of mine convinced me that those were the things that added interest and character to the painting. I learned so much more in the art of painting what I actually visualize rather than what I know, and adding what I feel.

After all the time spent on other details, Fawn the kitten was sketched in there in probably just a few hours! And while I do like the simplicity of her face I sometimes wish I had made Fawn’s eye as round as it actually is because it adds that essence of excitement to her look that truly makes it a cute kitten, and Fawn.

In the end, this was the painting I looked at and said to myself, “I think I can really do this,” and the painting others looked at and asked, “Can you paint my cat too?” The rest is all in my portfolio, and for this reason, Fawn’s portrait is the first portrait in my first Great Rescues calendar, a tribute to the kitten who led me to that part of myself that could find the essence of my animal portrait subject and bring my portraits to life.

Fawn was a real live wire as a kitten—always swinging from something and talking about it—and was very attached to me; I had known her from her first moment of life and I was always honored at being the the only living being in the world Fawn liked.

And even though, years later, we’d moved and changed the bedspread and dust ruffle, at least once a day when I went upstairs Fawn still dove under the bed and peeked out, waiting for me to walk past so that she could leap out and grab my foot. Little did I know when I chose to paint this when Fawn was about one year old that this moment would be one I would seriously want to remember.

And especially so, when a mere ten years later I lost her to lymphoma, though through the pain of my grief she sent me a wonderful sign that she accepted what had happened; read The Balloon.

And Fawn has inspired other works, most notably “Fawnball” and the series of block prints entitled “Tabbies“.

I will always be thankful to Fawn for giving me this gift. She is one of the family of cats in the dedication to this calendar:

Thank you, Kublai, Sally, Stanley, Allegro, Moses and Fawn,
my first feline family, for patiently showing me the way;
only gone from this mortal life, you are immortal in everything I create.

Read other stories about cats and their rescuers from Great Rescues.

There Was Just No Other Kitty After Samantha

The Cat of a Lifetime

A Bridge Between the Ages

Irina and Isis, Saved from the Flood

11 Comments on “The Portrait That Started it All”