All Cats on Desk 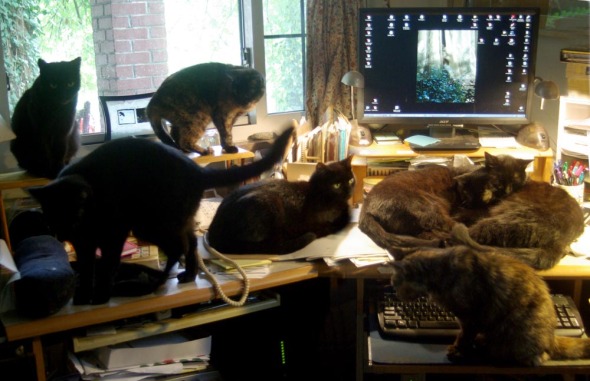 All Seven on Desk

Okay, there were the five yesterday, and today I had the opportunity to get all seven, which is the typical morning arrangement. They’re not as nicely grouped, but that’s partly because I had to stand up to take the photo, which caused Mimi and Jelly Bean to also get up and get ready to accompany me wherever I was going.

Cookie had been trying to get back on my lap, but I’d never be able to get up then. She and Kelly had been on my lap, and I was trying to keep them both on the keyboard shelf so that I could quickly stand up and take the photo.

From the back this time are Mimi and Kelly on the shelf; on the desk are Jelly Bean, Mr. Sunshine, and Mewsette and Giuseppe cuddled in a heart shape. Cookie is on my keyboard shelf, getting ready to jump down to my chair since it’s nice and warm after me sitting in it.

I think the heart shape cuddling is usually Mewsette’s idea. In every photo I have of two of them cuddling in a heart shape, Mewsette is one of the kitties!

Nonetheless, this is what my mornings are like. I gave up keeping my desk neat because anything that is set on it is moved around for kitty comfort. I’m actually looking for a new desk, shelves and whole workspace in this little corner with lots of cubbyholes to tuck things out of kitty reach, so I’m not too concerned at the moment.

As I said about yesterday’s photo, I’m sure they all like me and enjoy spending time with me but I know their dedication to my desk has to do with the “kitty keep-warm lamps”. During the summer I don’t use the task lights very often because the room is generally bright enough, and the lights are just too darned hot. As the air cools and the sun drops down lower in the sky, my office is suddenly darker with all the trees outside. From then I turn the lights on, and if I ever needed a passive cat-herding apparatus it would be these lights. I have actually set up lights elsewhere just to see what happens, and they are immediately popular.

Giuseppe and His Green Sparkle Ball

Cats are pretty intelligent, so I’ve never been able to figure out how they fool themselves into thinking that a little sparkly green ball is an object of prey, especially when they get all carried away and race all over the house, growl at other cats when they come near the catch, and stash it in a safe place when they are done.

“Trust me,” Giuseppe says, “any animal that can get completely freaky over a green sparkle ball is either not very bright or is extremely imaginative—and I dare anyone to say that I’m not too bright!” It turns out that green sparkle ball has a big purpose in Giuseppe’s day.

Out in the wild, cats scratch tree bark, prowl and stalk for hours and kill small animals for food, spray to mark territory, make nests of soft materials to sleep in, use any loose material for a litterbox, spend hours alone and also spend time socializing with other cats, engage in rough play and often fight bitterly.

It turns out that green sparkle ball is somewhat of a substitute for all that feline activity we’d rather they kept outside when then came to live in our houses. It’s important to give cats an outlet for their natural activities for their physical and mental health, and considering that this is Happy Cat Month, feline appropriate toys and activities are on the list of things that keep your cat happy.

I figure it’s a starting point for the imagination, something to follow down the rabbit hole like Alice into a wonderland of discovery. In watching Giuseppe play with his ball as I’ve watched so many other kitties with sisal toys and feathers and paper bags and boxes and rolled up balls of paper, I’ve realized that it’s no different from some of the things I do in pursuit of a creative end for my artwork, especially in writing poetry, to inspire a train of thought that I can chase down neural pathways, toss around and chase some more until I have exhausted its interest for me.

No wonder I get along so well with my cats. I actually wrote a poem about this several years ago; while he pursued his instinctive objective, so did I.

Loping along, he freezes in mid-stride at the sight of it,
silently flattens himself, tail straight out behind,
ears alert, pupils dilated in amber eyes glowing from black fur,
his whole world centered on his prey,
a little wiggle of the hind end and he creeps forward
one soundless step, then another,
now, completely ready, he springs onto his prey,
a small bright green fuzzy ball with sparkly silver threads poking out all around.

Something about this toy sets off the receptors in Giuseppe’s brain
even though it’s been sitting innocently on the carpet
not moving or making sounds or being in any way provocative,
at the sight of it he’s transformed into the efficient killing machine
which is any feline.

Up into the air goes the green sparkle ball,
he swats, chases, corners it,
a big cat at 18 months, Giuseppe is 13 pounds of dense muscle,
but he picks it up delicately in his teeth and bounds up the stairs two or three at a time,
I hear him galloping around, even hear the bedsprings
as he pursues his prey around the second floor.