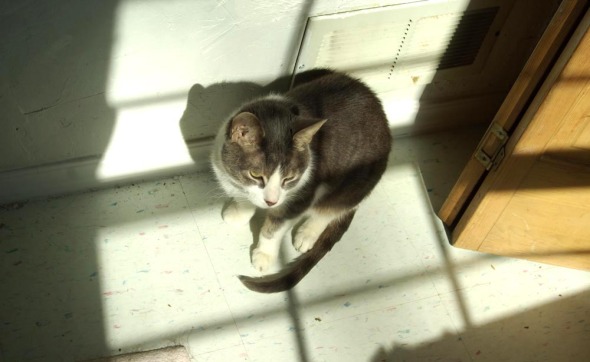 Namir wanders into the bathroom...

I’ve had more than one cat who loved the smell of bleach, but Namir really acted on his indulgence. As soon as I began to scour the tub with cleanser, he would appear on the landing outside the bathroom door, nose bobbing in the air, a faraway look in his eyes as he followed the scent and he’d hop into the tub if I didn’t stop him.

I’m sure you’ve noticed it’s darned difficult to rinse the last of the cleanser out of your tub or sink without leaving a residue, and even when I’d locked Namir out of the bathroom long enough to let the tub dry because he tried to get into the tub with the cleanser, he was in it as soon as he could get there, rolling around and breathing in the residual fumes.

It’s a wonder he lived as long as he did. But a friend apparently lost a young kitten to bleach poisoning years ago after the kitten walked across a wet floor each night where she’d used bleach water to clean and disinfect.