← Gathering Portraits and People: My Book Signing and Art Exhibit
No Box Too Small →

One day after mom had been gone all day she came home with pictures and stories about a kitty who looked like Namir but who didn’t have a leg! We weren’t so sure about that at first because we are all so perfect, but after we saw the photos and she explained that he’s really over the fact that he is missing a hind leg, we thought we’d like to meet him. He’s a hero cat! And his people hardly notice it anymore either. Anyone who would think that a cat missing a limb might take too much care or might not live as long or any other reason there might be to not adopt really needs to read about Simon and his people. ~the Fantastic Four

What are you looking at?

Simon is another incredible rescue I’ve met recently. He lives with the family of Cooper, one of the portrait subjects featured in Great Rescues, who have been rescuing cats for years. 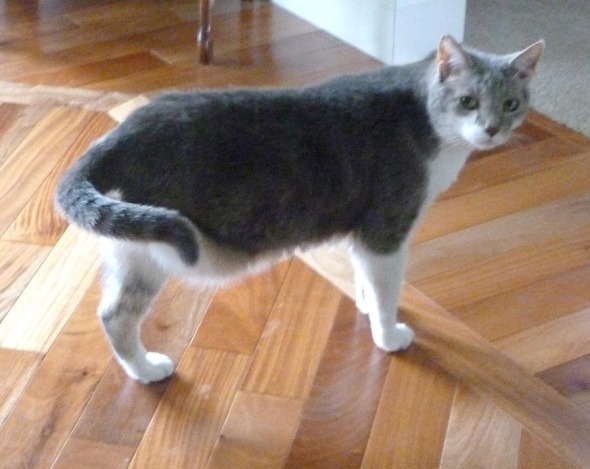 Animals are amazingly adaptive when it comes to changes in their bodies. Simon was a stray being fed outside by this couple who live in a rural area next to a farm as they tried to determine if he belonged to someone. Unfortunately he came back one day dragging a trap on his leg.

“We were actually away at the time,” said Simon’s dad. “Our neighbor found him and ran him to our vet, figuring that’s what we’d want—he was right—but he would have done that for any animal, and we’re so glad he did.”

Simon spent a month in the veterinary hospital while the veterinarian valiantly tried to save the leg, but it just kept breaking again and again.

“Simon was in so much pain, though he never acted mean in any way, but we could tell, the last time the leg broke again, he was done with it,” his people agreed. “The veterinarian removed his leg the next day and Simon was awake and alert, eating and social just hours afterward. We could tell he was thanking us!”

He came home the day after the amputation surgery and walked around as if nothing had happened except that he now had a slightly altered gait. He also had no problem being an indoor cat after that experience.

“We don’t know where Simon came from,” his mom said. “He just showed up and was eating with the outdoor cats. We were trying to track down an owner if there was one before we decided we’d get him neutered, then this happened. I think he was meant to be ours anyway.”

No one knows where Simon came from, and it’s sad to think what would have happened to him had he not felt comfortable enough with the couple giving him food and shelter outdoors to drag himself back. But he’s got a loving home now and a long life ahead of him.

For Simon, missing a leg does not mean missing a heart—he is still loving and playful and even has a snit now and then while you’re petting him, just like any other cat. If you see a kitty in a shelter who’s had a little accident, don’t pass them by.