Georgie’s Portrait and Another: Color Corrections

The latest on Georgie.

Here is the latest view of Georgie’s lovely face. Since the last update I posted I’ve been working on the detailed areas, tightening up the patterns on her face especially, and working out the rest of her shape. 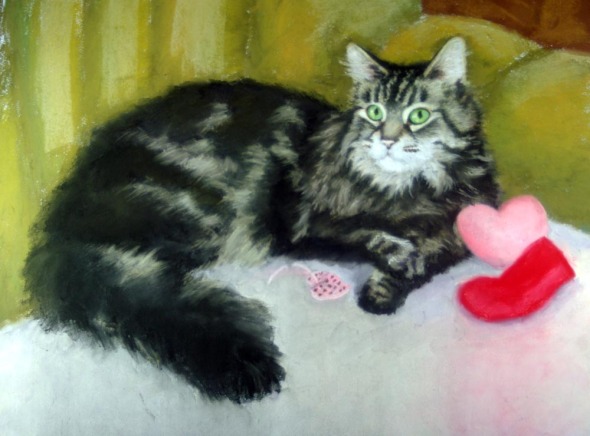 I actually sent an interim version of updates to the customer as I was working out the details in her face, and she pointed out something I had missed, and something that’s a common hazard of working from photos—even when you get to meet the subject. 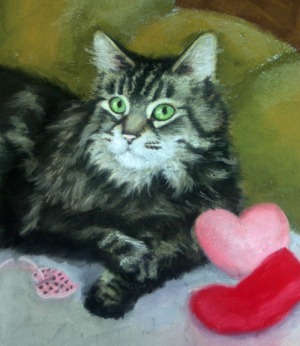 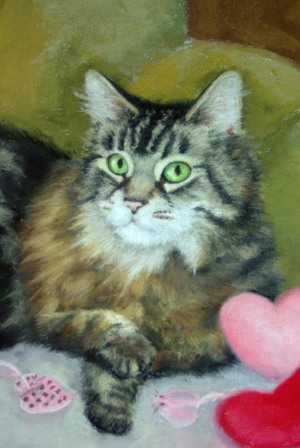 Look at her ruff. After looking at the proofs from the set including the image on the left, Georgie’s mom told me Georgie doesn’t have any brown in her ruff, she’s really pretty much black and silver.

This is what I had remembered, but all my photos had the brown included in her coloring.

Usually I ask people to take photos without a flash because the flash itself changes tones and values, especially in something as textured as fur. But in this case, the photos with the flash were correct, while the ones I took in natural light were inaccurate, capturing the light from a table lamp as it was a rainy day when I visited. Of all things!

And where my habit has long been working in my studio at night after everything else is done and they phone isn’t ringing anymore, I’ve decided for many reasons to start the day there rather than end it there: I have some natural daylight, not enough to work by, but it still influences colors and my choices seem to be more correct, and my eyes are fresh and rested and I’m not tired after a long day. There have also been many days I haven’t gotten to my studio at all for other work, so this ensures that I get at least a little time there each day.

I also adjusted her front paws. They’d looked awkward from the beginning, but that was her posture on that particular day; Georgie is 20 years old, and sometimes the older ladies just settle down, but they aren’t terribly organized about their paws and tail.

Many animals cross their paws and it’s often an endearing memory for their people. But every animals’ crossover is unique so I used an older photo of Georgie her mom had given me to get her paws right.

In the process of this, I removed a small pink mousie. I’ll add the mousie in elsewhere when I’ve got the rest of her settled.

See the first draft of the portrait and read about Georgie.

Returning to where we came from: Bodie and Bear Bear

I don’t know if you remember this portrait from last fall. It’s Bodie and Bear Bear and was a surprise Christmas gift to a wife from her husband, a couple for whom I’d done a portrait in the past.

I was very pleased with it and so were they, but in this case it was using a photo where a flash had been used. After looking at it for a while they decided Bear Bear was too light, and indeed I wondered as his breed is typically a darker red, though judging by the floor and carpet and Bodie in the photo it seemed the photo was correct. Sure enough, he was a darker red so they called to ask if I could correct the portrait.

Of course! I couldn’t live with myself if it was that far off. They not only sent other photos, but they also sent some of his fuzzy locks in a plastic baggie, which was very helpful!

So I began working him out into his darker colors, then realized that, where he’d contrasted nicely with his background before, now he literally “faded into the woodwork”—I had a hard time distinguishing him from the floor. I let his people know it was taking so long because I was trying to work this out; even if he did naturally fade into the floor I could adjust things slightly so that he stood out more.

His mom e-mailed back that it was funny I would say that—she often nearly stepped on him because he matched the red oak floor. Well, I must be more accurate this time!

At this point I am working out making the floor a little lighter around him and working his ruff darker. I’ll be updating again soon.

Bodie and Bear Bear are Ready to Go Home

3 Comments on “Georgie’s Portrait and Another: Color Corrections”