Mewsette and Mimi cuddle on my lap.

I can only think there’s some sort of competition happening after the reports of “stacked torties girls” from yesterday. Now, that may be true of Mimi—she tends to show up in any of Kelly’s or Cookie’s favorite spots, looking innocent—but Mewsette has no guile whatsoever, and she was the first on my lap this morning. 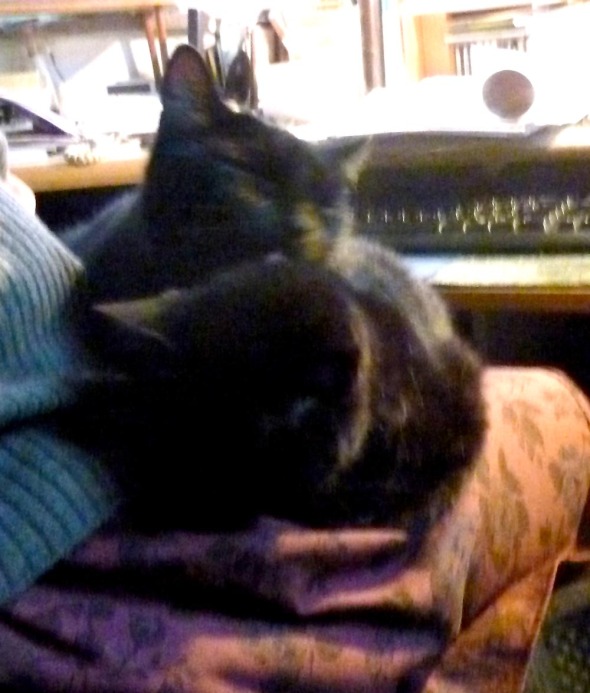 Happily purring and big enough that I have to bend my elbows around her to get my hands to the keyboard, she apparently didn’t mind when her mom came along and first and walked all over her, then cuddled down in front.

This activated Mewsette’s bath gene and she immediately began bathing Mimi, who quietly enjoyed it.

A little later, they left for other activities and Giuseppe settled his large, heavy self across my lap, trying to expand himself so that I had to push away from the keyboard. Eventually Mr. Sunshine came along, thought we looked cozy and decided there was enough room for him, especially if he simply laid down on top of his brother. Giuseppe shuffled a little and this set off Mr. Sunshine’s bath gene and Giuseppe was treated to somewhat of a bath around his ears—after all, they couldn’t move too much or one or both would go tumbling off my lap. 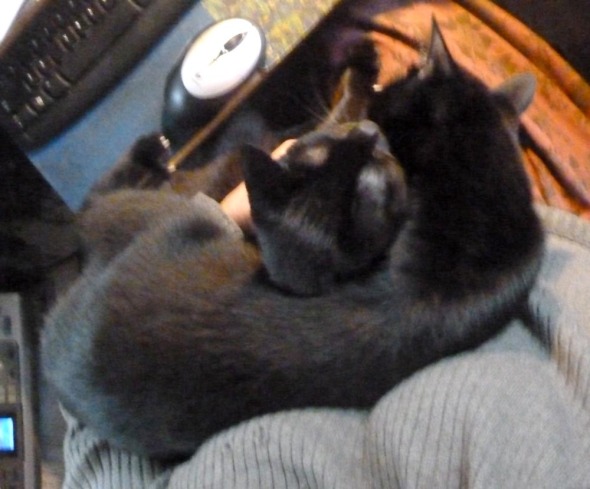 “What?” Too bad Giuseppe began to turn his face! I’m not sure what he was doing, but it made me reach for the mouse to make sure it didn’t end up on the floor.

What are you lookin' at?

Again, the only thing I got done was to take a lot of shaky photos.

Look at That Menu!

Someday soon I’ll have the time to reorganize The Creative Cat’s content into a newsletter-style layout with a clever navigable slideshow at the top and recent articles listed in sections with little thumbnail images so you can find my content more easily.

Until I finish that new layout, I’ve actually been able to make some improvements in my menu with the template I’m currently using—not only can I link to pages on this site, I can also list categories as menu items.

Understanding from reading the page and post statistics that blogs so conveniently give us, I know that daily photos are a popular reference. They are for me, and sometimes I’ll spend more time than I want to looking for a particular photo unable to find it—and it’s my site! So the first thing I did was to revise the former page “Silly Things My Cats Do Daily Cat Photo“, which had held early highlights from when I began posting daily photos, with a reference to “Daily Photo” on the menu so you can stop by and just look at the recent daily photos by choosing “All Photos“. 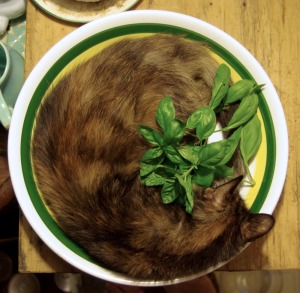 Then, further, I included drop down entries under that header for “Black Cats: Mimi and the Fantastic Four“, “Tortoiseshell Cats: Cookie and Kelly“, and couldn’t pass up a special section on “Cookie’s Kitchen Escapades“. I’ll be adding a few more later, such as “seniors” and even sub-categories for each of their names so you can look at photos of your favorite kitties, but I stopped at this for now.

I’ve also added a few categories under “Pet Loss” and “Backyard Wildlife Habitat”. I need to work with my CSS coding to revise the menu layout itself so that I can add links to my portrait updates and features such as “Living Green With Pets” and “Creating with Cats” as well as articles from my guest writer, Karen Sable.

Kelly Sleeping in the Cat Library

Part of the challenge with this is making sure that everything I want to categorize is in the category I want! Back in February 2009 when I initially set up The Creative Cat I had many ideas for what I’d like to do with it but thought I’d noodle around and let it become what it should be. This means that I have categories that don’t really make sense to me nearly three years later, and posts that should be in categories I subsequently added.

I actually enjoy organizing things; finding the time for it is another! I’ll keep tinkering with this until, behind the scenes, I develop the layout I really want and move over to that. For now, take a look through and see how it works.