Something in the Geraniums 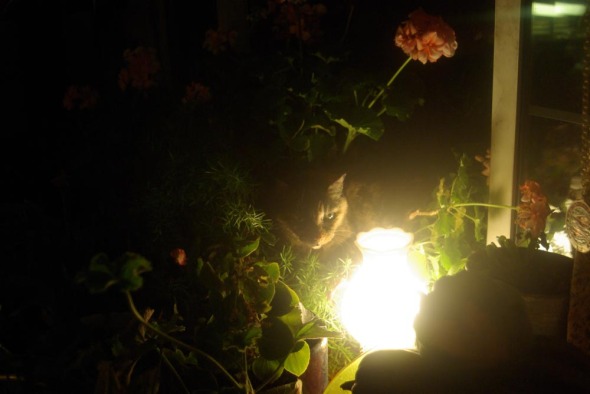 I finally carried my geraniums inside this weekend with the warning of freezing temperatures, and look what I discovered in one of them! A Cookie! She was probably cold and drawn to the lamp, which is nice and warm. Mind you, she is curled up on the soil under the geranium plants.

You remember that I warned you to look for any sort of opportunists that might try to come indoors with your plants when you bring them inside. You see, this really does happen!

Cookie warms her nose by the lamp; don't worry, it's only a 25-watt bulb for feline safety!

I was actually very surprised to see Cookie in the geraniums—I had heard a lot of rustling and shuffling there and thought it was one of the black cats, namely Mewsette who likes all plants and acting as if she’s walking through a jungle. I loudly remarked that whoever that was should get down, and the noises stopped.

A little while later I walked in the kitchen and saw movement in the geraniums, and it was Cookie! The most surprising thing is that she had quite the journey to get to where she was sleeping: up on the kitchen table, leaping across two feet of open space from the table to the cabinet in front of the window onto a very small spot left after I’d covered it with the geraniums, then walking around and in the plants. No problem for a 19-year-old apparently!

This kind of qualifies as a Cookie in the Kitchen incident, since it happened in the kitchen, but she is actually as curious in other rooms as well, getting herself into places I had no idea she would ever think to go.

I have kept my geraniums for years, carrying them out in the spring and back in for winter. Most of them are several years old and are cuttings I’ve taken from others; I actually had one deep lipstick pink geranium for 13 years before she didn’t sprout leaves again one spring. They’re like old friends, though none of them is as old as Cookie!

I couldn’t be in White Plains, NY, with all my fellow members of the Cat Writers’ Association (CWA) this Friday and Saturday, but I was there as much as possible in spirit, obsessively checking e-mail and Facebook to read news of what was happening in the workshops and social gatherings, and at the awards banquet on Saturday night. Most of all I truly missed the opportunity to socialize face to face with all these e-friends!

I am also very proud to have won four Muse Medallions, the highest honor awarded by the Cat Writers’ Association, these chosen from the awarded Certificates of Excellence announced last month. When the awards list is published, I’ll post a link so you can explore all the winners.

You'll recognize this one.