I wonder if my neighbor’s kitty had a turkey dinner and is now surrendering to the unavoidable nap as the sun sets, leaving his windowsill in shadow. He just looks so contented and he’s usually very shy and leaves the window when I look at him.

I also like the details of the peeling paint and the nearly monochromatic theme.

I’m thankful he has a happy home, and I’m sure he is too.

I Am Thankful Jelly Bean is Home 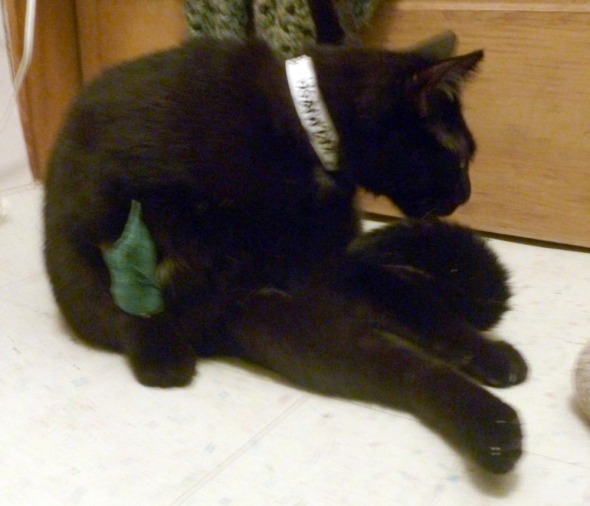 He pauses in the action.

So the little Bean Bag is back, and in fact we were only gone a little over three hours. It turns out he was blocked—even though he was producing drops, his bladder was not emptying, a situation that was already painful evidenced by his quiet crouching in the corner and not eating breakfast. Jelly Bean not eating breakfast is a sign the world is ending, and drastic measures are in order. I decided to wait until evening just in case the prednisone and added antibiotic in addition to the vitamin C and cranberry would open the flood gates eventually, but they did not. He has reached this point three times before in his life though I’ve always turned him around, but not this time.

Since my cats see a house call veterinarian, the only time they’ve ridden in a car was when I took them to be neutered. They had each other, so it apparently wasn’t such a trauma. Jelly Bean just gave one protesting meow, then was quiet, no yowling, no rattling the cage door, meaning “no making mom nervous while she’s driving in the dark and very concerned about your condition.”

Fooling with his bandage.

The Bean was sweet and cuddly and charming and purring at the emergency hospital, as all my cats tend to be. A tech did the triage interview and the mini-exam, then took him into the back to begin treatment while I did paperwork. The veterinarian returned to tell me of her plans, which included unblocking, some testing and at least two days of hospital care.

When I went back to reception to make my downpayment and saw the cost, the high estimate being somewhere in the neighborhood of what I’d paid for my used Ford Escort, and that I’d have to pay the entire low estimate, well, I had known all along I’d have a problem there. I simply told them I didn’t have it and asked what they could do. The receptionist went to talk to the veterinarian who said that for a price I could afford she would give him an anesthetic, unblock him, flush the system, and send him home with medication. This was actually what I’d wanted anyway—most of the estimate dealt with sitting around to watch and see if he peed again, and I’d already proved I was pretty good at that having spent a good part of the last three days doing just that. 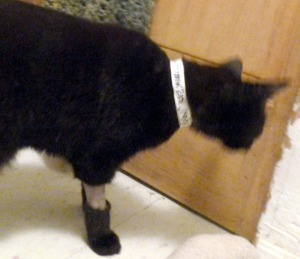 He also wants out.

Caring for a cat in this condition is not to be taken lightly. I am good at it because I’d already cared for two cats who blocked, or attempted to, pretty regularly, and my veterinarian had thoroughly explained what was happening and what to look for. I’m sure my description of his condition and my initial treatments in my intake interview told the veterinarian I was experienced enough to adequately care for a cat in this condition.

So, I sat back down to wait for him, and was rewarded with bringing him back home tonight. His return in the carrier was greeted with skeptical looks and even hisses from his siblings who apparently thought he smelled funny. His best buddy, Mr. Extremely Sensitive Operatically Melodramatic Giuseppe is generally upset and hissing at every opportunity. JB is his best buddy. Could be he’s worried, upset by the way JB smelled when he came back, or jealous that JB got extra attention.

A lot of this happening.

JB is always a very purring and demonstrative kitty, but he was definitely still under the influence of the anesthetic, not wobbly, but much more talkative and walking around nearly in circles in happiness. He was very difficult to photograph because he would not stop moving!

I am very thankful for all this, and for what I have learned that enables me to take care of my little guy. I am also thankful for everyone’s good wishes!