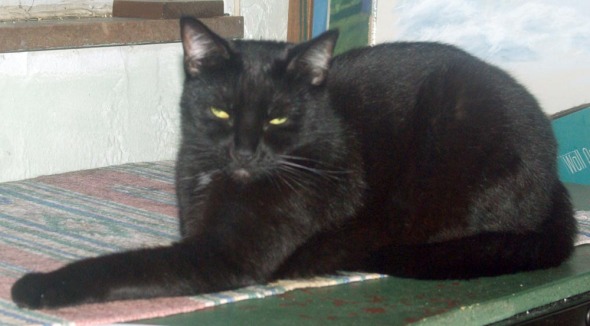 Yo dudes and dudettes, I got the news, this Bu-…Burpen-…Bupren-pine…Bu-pren-or-phine…is really good sh…stuff! No pain, I am feeling no pain at all, and there’s little paisley mices running around under all the furniture! Cool! Mom does that silly squeezing my belly thing saying something about my bladder, and ooohh! it tickles! I just roll around and laugh! And when she let me out of the bathroom because I peed in the box (so what, I pee in the box all the time) I flew around the house! I mean, I really flew! I wrestled with my brothers and I beat them up, too bad! Mom called my doctor to see if this was okay and I just don’t see what the problem is, I’ve never felt this good, like, in my whole life! I just have to sit still every once in a while and wait for the room to stop spin…n…n…ning…

This is Jelly Bean on drugs. He’s still having some issues with inflammation and earlier today his urine output dwindled to sitting and waiting in the box, but nothing happened, Jelly Bean looked miserable and I was biting my fingernails; we needed to add a little prednisone back into the mix, so between the two JB is having an out-of-body experience. I’m really watching everything he puts in the box and feeling for the condition of his bladder in that plump little sandbag, and he just falls down and rolls around. His purr is rattling the dishes. I’m also watching so he really doesn’t try to fly.

It’s just funny to see him now and then with totally dilated pupils and a pretty blank expression, and he is playful and active but right now he’s just a little out of control. I noticed this first last night. Buprenorphine has a mild narcotic effect and what I’m seeing is normal, including the presumption of little paisley mices under the cabinet. Then after he does everything he can think of, he suddenly folds up his legs and settles down and looks really stoned and maybe a little paranoid, especially when one of his brothers comes near.

Especially since those two brothers are being total jerks. On Wednesday when I had JB confined for most of the day hoping he’d produce more than a few drops here and there, Giuseppe couldn’t live without him, I had to allow visitation with the three of them in the bathroom. Those two are best buddies—you can look all over this blog and see photos of the two of them together. Wednesday night when we came home from the emergency hospital I thought they’d be glad to see him, but they hissed and hit him and ran away growling, even growling at each other and getting into a pretty noisy wrestling match after I kicked them out of the bathroom. This has improved through the day today until now when there is no growling and just the occasional hiss. Jelly Bean did start a wrestling match with Giuseppe a little bit ago, which is totally normal for those two, and Giuseppe did hiss at him a few times, but they also wrestled and Giuseppe held him down and licked his head a few times, a good sign.

Mewsette cuddled with him late last night and gave him a little bath. I was glad to see that, but it’s not the same as his brothers.

So the Bean gets three more days of this! Wish me luck in keeping up with him. 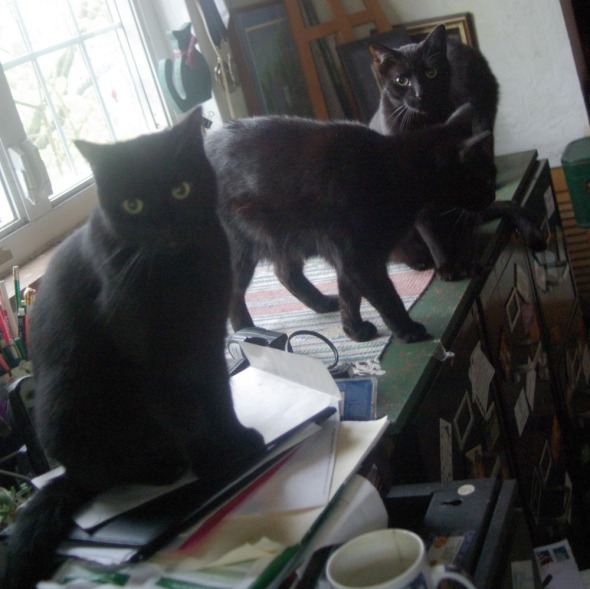 The Fantastic Four are ready for Black Cat Friday.

We got ’em! Lots of black cats! Five all total! We’re ready for the big day!

And the Fantastic Four this morning were waiting in line for…not sure, but since everyone was waiting in line everywhere else today, we thought we’d line up on the edge of the filing cabinets. Eventually mom got up and we raced her to the bathroom where she turned on the faucet and we had a drink. But that happens every day, so we’re not sure what the big deal is on Black Cat Friday. We’re just glad mom didn’t desert us to go stand in lines with other humans. Unless she was getting something for us. 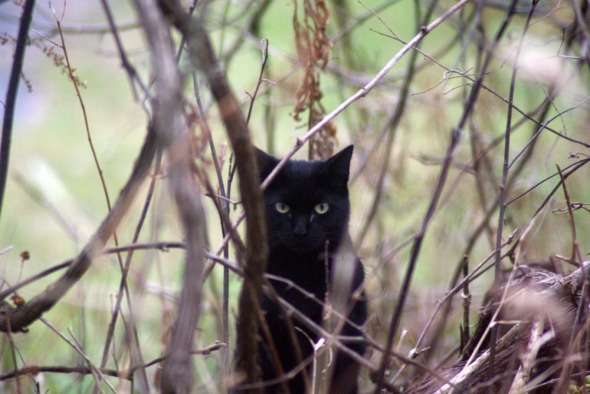 Black kitty on his own in the wilderness.

I saw the kitty above when I was on one of my local trails this past weekend.  Judging by where I was when I saw him and the state of his fur I would guess this kitty did not have a home to he thankful for this Thanksgiving. As he moved away and crossed the trail I could see a kink in his tail and ripples through his fur, signs of scars and a life lived outdoors.

I had nothing to  catch him with, I was on my bicycle and rain was threatening, and I decided against any type of pursuit. “You can’t save them all,” I have always had to tell myself.

But I should save the ones I can save, and while I may not have been able to catch this kitty that day or return with a trap and food later, I can always support someone who can or the network of organizations that help all animals.

Therefore, on Black Friday, keep kitties like this guy in mind as you plan your activities.

You can support a local TNR effort with a donation or even volunteer efforts at a clinic. If you know someone who manages a colony, take advantage of Black Friday sales to buy cat food and give it to them.

Likewise, buy a case or two of canned cat or dog food to donate to your local shelter and deliver it on Black Friday—or any Friday!

Visit a shelter and adopt if you can, become a foster family or just pet the cats and walk a dog or two and make a donation.

Many shelters have wish lists published on their websites including things they need or would like to have but can’t quite afford or which will offset operating costs, and on these lists you’ll find the usual stuff such as food and litter, but also items that might surprise you such as office furniture, cleaning supplies, even a car. Check the lists and see if there is anything you can supply.

These are just a few things you can do today to turn the consumer power of Black Friday to the good of animals. Make sure the animals or the people who help them are on your list.