My Kitchen Assistant: From A Year Ago Today 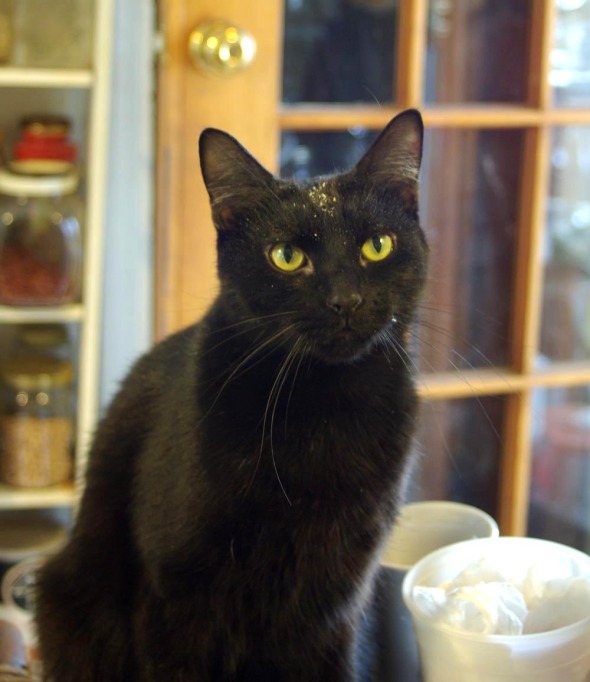 I don’t know where he got the crumbs on his head, but Mr. Sunshine wore them proudly all afternoon.

“I helped mom. You didn’t.” Everyone ignored him.

I keep a sturdy stool next to the sink where I work so that curious kitties can watch the process without, theoretically, jumping up on the counter and into the big bowl of stuffing. Mr. Sunshine, known for his adventures, managed to stay out of trouble on Christmas Day.

But at the last minute he decided to make a face at me. I expected to see him stick out his tongue. He’s a silly guy. 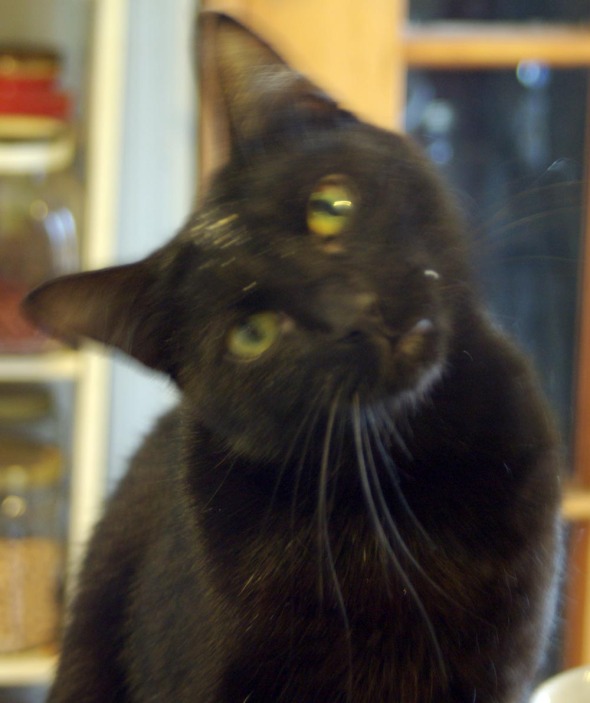 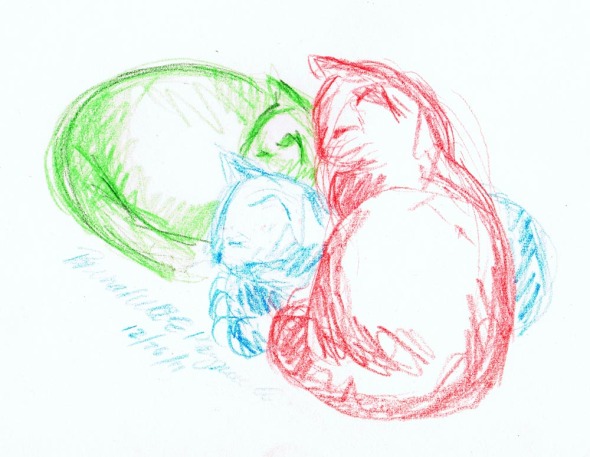 Mewsette,  Mr. Sunshine and Giuseppe cuddle on the floor of my studio. It’s hard enough to distinguish them in real life, let alone in a sketch, so I did each of them in a different color. The colors relate to something from when they were kittens—they were all so much alike, aside from Jelly Bean with his white spots, and I felt the need to tell them apart, so I added a fingerprint of tempera paint to their left ear, one color per kitten, the same every day. Mewsette was the red kitty by default, Mr. Sunshine was the yellow kitty for obvious reasons, and Giuseppe was by chance the green kitty though this resulted in his full name, Giuseppe Verdi, opera composer, or Joe Green in English. Unfortunately, I didn’t have a good golden yellow deep enough to carry a drawing, so I used turquoise for Mr. Sunshine for this one.

I’m glad I did two sketches today. I had initially done a little watercolor but it was neither scanning nor photographing well so it will have to wait for tomorrow or another day.

For a gallery of the ones available for sale, visit my Etsy shop in the “Daily Sketches” section.

Read about the reason for the daily sketches in The Artist’s Life: Daily Sketches.

And read about purchasing them and requesting them as a donation item for your shelter or rescue group in The Artist’s Life: Daily Sketches for Sale and Donation. 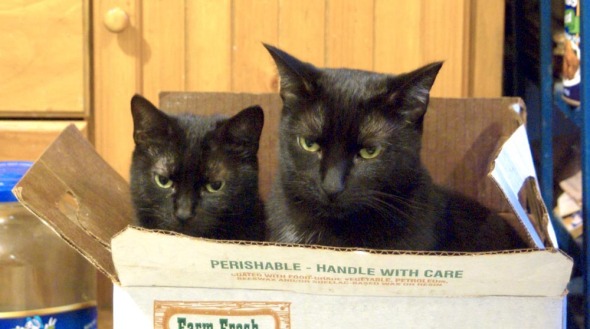 For the fun of Boxing Day, Giuseppe and Mama Mimi spent some time together in a box in the kitchen.  So it’s a produce box and not a gift box—they aren’t concerned, especially as long as they are together. And as I photographed I noticed the warning, “Perishable – Handle With Care”. Truly!

The box was actually Mimi’s idea first as Mimi is irresistibly drawn into any container or open space and I made the mistake of putting the box down on the floor. It often seems that Giuseppe has no idea how big he is. Mimi is a patient mama, even when he sits on her.

A Christmas Message from Jack’s Family 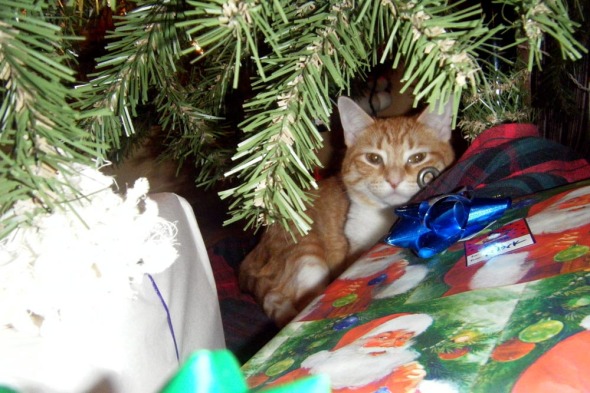 Earlier this year an orange kitten showed up under the spruce in my front yard—and since that spruce had once been a Christmas tree for the family who lived here years ago this kitten was kind of “the kitten under the Christmas tree”! But not for me, even though I’d been thinking about an orange kitty, as we soon discovered I was just a stopping place on his way to his intended family.

I put signs up on the telephone poles, let the local police know, posted him on the shelter websites and on The Creative Cat, sending e-mails out to friends, visited a veterinarian to scan him for a chip (negative), and talked to the neighbor kids.

But all that effort was totally unnecessary as a friend of mine read the article on Facebook and decided he was meant to be with her family, but it was more than just seeing a cute orange kitten and wanting to adopt him. With teenage children, three cats, two dogs and a guinea pig already, who would intentionally ask for more? But she felt Jack was meant for her household, Jack seemed to know them immediately, then went on to integrate into her household as if he’d always been there. It was without a doubt the easiest cat rescue and adoption I’ve ever administered, and every update, every Facebook photo, every little e-mail extolling Jack’s loving and playful personality just fills my heart.

At the end of this article I have links to the series of articles I wrote from the time I found him to when he was adopted and fitted himself into his new household.

And here is the e-mail my friend sent to me on Christmas morning along with the photo above, one of the best gifts I received, and reading her words it’s not hard to understand why I was more than happy he would be living in her home!

Here is a current picture of Jack, taken just a few minutes ago. I swear I take more pictures of him and the other pets than anything else. I thought your readers may like to know how the little guy is doing.

Jack is almost a year old, he is in perfect health, and weighs 10#’s, and of course he has been neutered. Jack has the best personality and character, and his curiosity is unlimited! He has three older feline “sisters” and two canine “sisters” and a fellow brother “guinea pig”; we joke that Jack is an inter-species-transgender cat. He is friends with all of his housemates. Ohmygosh, the look on his face is so priceless each time he sees one of his housemates- the look on his face is that of pure and unedifying love and delight that says “there’s MY friend, I have to go play with MY friend NOW, I just love, love, LOVE my friend and I have to say it NOW!” It doesn’t matter if the others want to play or not. Jack has a special bond with our youngest dog, oldest cat, and the guinea pig specifically, however he is equal with all of us.

It still amazes us that Jack can instantly go from being the hyper aware, pouncing and playful cat, as he is a complete and total lover boy who loves to receive affection and returns it tenfold. He will be running around the house one minute and the next, flopping down to sleep wherever he is at at that moment. Both in the middle of whatever is going on as Jack HAS to be in the center of all family activity always.

Jack has added so much joy and love to our family. We always say after adopting our latest pet that that pet is the last one we’ll adopt. However, as each pet has kept reminding us, we are meant to be together as a family. Animals have so much to say and love to offer, we mere humans need to learn to stop and listen to them. Pets talk to us all the time. And nothing brings animals/pets more happiness than to be acknowledge, accepted, while being listened to and respond back. It is so simple.

Anyway, this little unmet kitten, who we fell in love with before meeting him. And upon meeting him, we instantly knew the fit just clicked between us humans and Jack. Although naming him was a challenge- to us humans, it took us over a week to finally figure out what his name was, because he ignored every name we tried to call/name him. When we said “Jack” he perked up and responded as if to say “you silly humans, you FINALLY figured my name out! DUH!!!! Now rub my tummy!!!” (Jack responded to the character name “Captain Jack Sparrow” and the name fits. He stole our hearts and love!)

I’d like to think we adopted him and that we did so much for him, however, the reverse is true, Jack has totally settled our family and we feel complete.

Jack simply radiates love and he is more than willing to share his. We are blessed. MJIS

An Update on the Little Orange Guy

A Christmas Message from Jack’s Family