Happy New Year with Sparklies: From A Year Ago 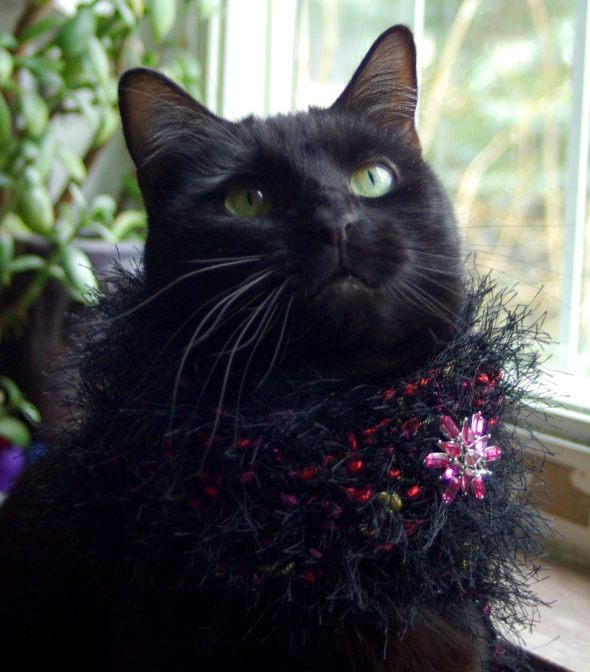 A sparkly new year's wish for everyone!

Because we’ve been preoccupied with Cookie, we couldn’t create a new year wish for you, but Mewsette was so beautiful in her photo shoot last year she deserves another year of greeting our readers!

On behalf of my household of kitties, Mewsette wishes you and yours a happy new year!

Faraway Expression (I'd rather be birdwatching than wearing this thing around my neck).

She’s modeling my latest crochet scarf with vintage pin, and the little sparks of color and the shape of the pin brought to mind fireworks. She has the greenest eyes of the group, too, and I wanted to highlight that with the background.

Mewsette Coquette (are you actually going to give me that treat or just wave it so I'll look at it?)

I’ve never been one to dress up my cats, but I’ve been handling Mewsette and her brothers since they were three days old and somehow decorating this family of nearly solid black cats seems like the natural thing to do.

This extemporaneous photo shoot developed after I tried to photograph the scarf but certain kitties decided it was meant to be a toy—I have to admit they have a few toys that resemble this—and in the ensuing activity someone ended up wearing it.

And they tolerate it, in part because they inherited their mom’s sweet personality and are the nicest family of kitties I’ve ever known (in a lifetime of kitties), and perhaps also because I’ve been handling them all their lives. They put up with a lot of stuff from me, but of course, the benefits are many.

Dignified (I'm just letting you know that I'd done with this thing around my neck now).

They are now three years old, so it’s time to put them to work!

I think Mewsette has a true career as a model—I’ve included a few more shots from this session along with Mewsette’s comments.

Her brothers were spared the indignity of having to wear this thing, but their day will come.

It’s a little difficult to tell, but I’ve included the extra space on the right of this last photo so you might see how l-o-o-n-n-g Mewsette’s whiskers are.

I hope your 2011 begins on a bright note with colors, smiles, purrs and happiness, and continues to become more beautiful every day!

17 Comments on “Happy New Year with Sparklies: From A Year Ago”