Daily Sketch: Three Cats From Above

Mimi calmly sat in the sun, Mr. Sunshine had a nice bath, and Giuseppe sat looking at them, at me, out the window, into my bedroom. I loved the arrangement of the three, each doing their own thing but being together as good friends and loving relatives can be. They were fairly content, and I had my materials in hand as I was standing there so I didn’t distract them with my own movements.

I thought I was done with the sketch when I’d done the quick studies of each of the three, then I though that what had visually tied them together for me was also the rug they were on, which is that ubiquitous pink-flowered rug we’ve seen frequently lately in sketches and photos, but I didn’t want the pattern, just the connection.

I like to get an interesting perspective on them, like looking at them from above. It’s challenging after seeing them from nearly eye level a good bit of the time when I can finish a drawing just from memory if they completely move away. Just being able to store away all these other details has caused me to study them even more closely from angles like this.

And I’ve also come to enjoy colored pencil a lot more than I ever thought I would. I actually love just drawing, making a nice expressive line on paper to try to capture the essence of a scene in the least amount of marks on paper, and will most naturally gravitate to my old ebony drawing pencils as my most familiar medium. The colored pencils are coming in a close second, even ahead of my former second favorite, the charcoal pencils. The colored pencil set in my little art bag is just a student-grade—really elementary school grade—dozen box of thick-lead pencils, just 12 colors to choose from. I have a 60-pencil set in my studio that a friend gave me when she was cleaning out her stuff. I’ll have to indulge some time.

Unless I have linked the sketch to something else, which is rare with daily sketches, you can click the photo to see a larger version. I save them at 1000 pixels maximum dimension, and at that size the images are nearly twice the dimension and you can see more detail in many of the images I post; I hope you students do this. Please remember if you download or share, my name and the link back to the original image should always appear with it.

Click here to see other daily sketches, and for a gallery of the ones available for sale, visit my Etsy shop in the “Daily Sketches” section. 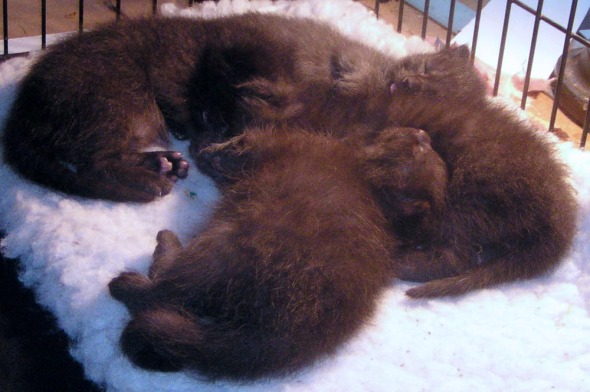 Well, it’s not embarrassing, it’s really cute. They are about two weeks old here, August 10, 2007, and they were born on July 26. They’re so precious, the little fuzzballs.

I keep referencing the colors of tempera paint I dabbed on their ears to tell them apart, and how that influenced their names and readers have asked if I can somehow show this to them. I found the photo I wanted to use, then started looking at baby pictures, and…well, if you’ve ever watched a litter of kittens, or puppies or other animals or even a human grow up you know how it is when you start looking at pictures.

And then I had a difficult time deciding which one to use! So I have three, in a little series: Sleeping, Waking, and Awake. And I really can’t even tell you which is which a lot of the time unless I noted something in the file name. 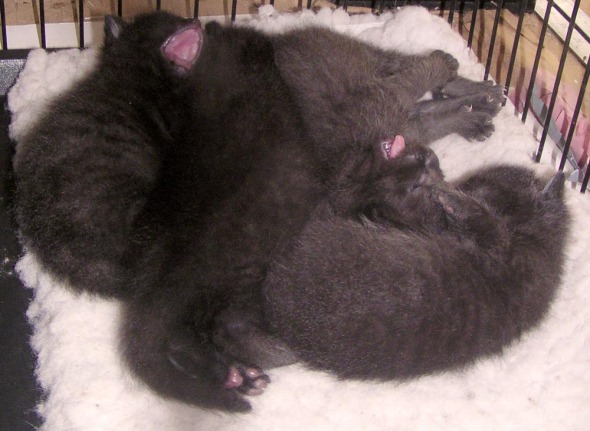 Waking up, yawning and stretching!

Here they are yawning and stretching! You can clearly see stripes on all of them—the one in the middle has a shadow from the bar of the cage they are in because I turned on the ceiling light, but they were all fairly gray-black, lots of stripes, and lots of individual white hairs on their legs, faces and tails that disappeared in the next few weeks. 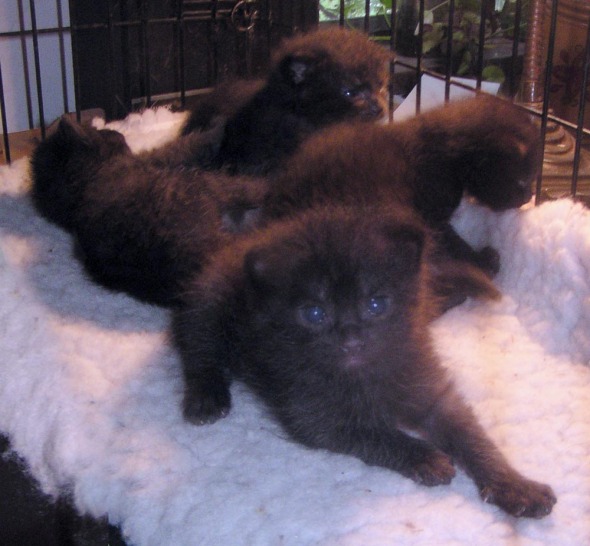 Awake and ready for action!

I noted a few things with this photo, but they didn’t have their permanent names yet. I do know that this kitten in front was the girl, so it is Mewsette, the first to do everything and I always remember that serious, determined expression on that tiny face! Directly behind her was Jelly Bean, and I recognize his profile, as well as some of the features of Mr. Sunshine’s face behind him. The lazy bum is Giuseppe, who always woke up last with great fanfare—unless one of the others landed on him and started wrestling!

As you can imagine, I have a zillion photos of them, but most of the good ones are on film from about a week later when I moved them into the bathroom and the light was better. But compare them to the Fantastic Four you know now.

There is a reason why this time with these kittens is very, very special. Briefly, this was an era when I was still grieving one very recent loss, and five losses in total; I had had their half-sister Lucy put to sleep for FIP on July 10, 2007, just a month earlier, and in 2006 had lost my four oldest cats, Moses, Cream, Sophie and Stanley. Before Mimi joined us with her babies, my household had suddenly gone from nine cats to four and as hard as Cookie, Kelly, Namir and Peaches worked I would say I was in shock as well as grief. But having this little pile of kittens at my disposal to hold and hug and kiss and photograph and love, as well as their mom, the gentle, understanding Mimi, helped to change that for me. I spoke about this on Pet Memorial Sunday last year, glad to share it with others deeply grieving their loss.

But this is where we all began, four demanding little black fuzzballs on the work table in my studio!

Unless I have linked the photo to something else, which is rare with daily photos, you can click the photo to see a larger version. I save them at 1000 pixels maximum dimension, and at that size the photos are nearly twice the dimension and you can see more detail in many of the photos I post. Please remember if you download or share, my name and the link back to the original photo should always appear with it.

I often see kitties in windows as I pass houses in my neighborhood on foot, on bicycle or in my car (am I a distracted driver? at least I pull over before I take the photo!).

I have to catch up on posting these photos, like this lovely solid gray kitty from last fall, keeping watch in the big picture window on the porch reflecting the fading pink roses by the railing, classic Venetian blind behind her.

I posted this on my Facebook page a few weeks back without realizing readers here might not find it there. Enjoy!