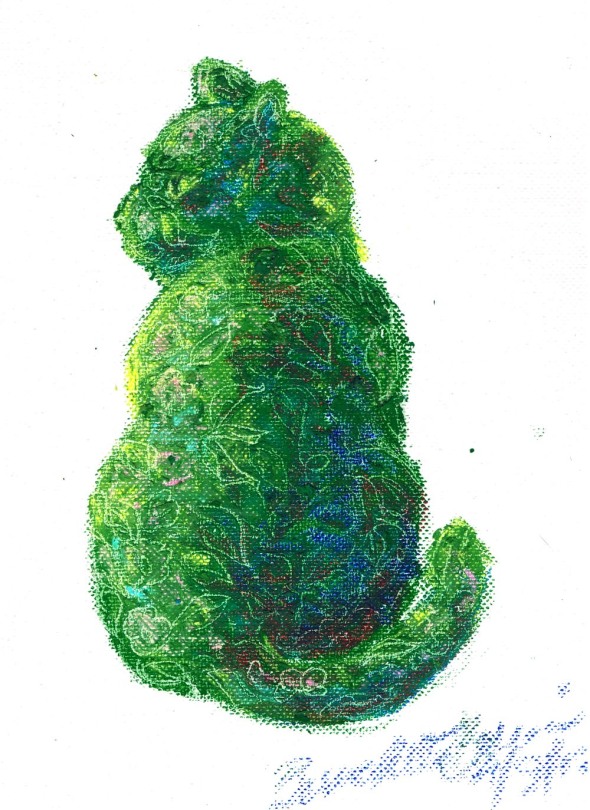 All the trees and shrubs are leafing out here, especially the lilac right outside the north window where the bird feeder hangs. All morning long sun dapples the new bright green leaves with constant change and movement. Through the branches I can see neighbors’ blooming apples, crabapples, the first of the azaleas and the last of my forsythia.

All this came together as I watched the light play over Mewsette’s fur and became the third variation on this theme I’ve been exploring of oil pastel on canvas paper, mottled and mixed and then scraped and scored.

I’m actually not pleased with her shape because I liked her first position by the window and her second and tried to combine them. Still, these are just sketches, and I think after this I will move them to less-textured paper. It’s been fun to work it all out.

Here are the other two paintings of Mewsette in oil pastel: Mewsette in Blues and Greens and Mewsette as a Rainy Spring Day.

For a gallery of the ones available for sale, visit my Etsy shop in the “Daily Sketches” section.

Read about the reason for the daily sketches in The Artist’s Life: Daily Sketches.

And read about purchasing them and requesting them as a donation item for your shelter or rescue group in The Artist’s Life: Daily Sketches for Sale and Donation.

Mom, I Want You to Know…

Giuseppe is serious about this.

“…I really did hear every word you said.

“I take it seriously when you talk to me, even if it doesn’t appear that I do.

“What you have to say is always of the utmost importance to me and to…uh…what’s his name, you know, my brother…that other cat who was here…

“I forget what I was going to say…

“We weren’t, like, it was just so warm and we were sleepy…

“…had nothing to do with that catnip candy cane…”

Under the influence, indeed. Giuseppe tries to make up for yesterday, failing miserably.

Unless I have linked the photo to something else, which is rare with daily photos, you can click the photo to see a larger version. I save them at 1000 pixels maximum dimension, and at that size the photos are nearly twice the dimension and you can see more detail in many of the photos I post. Please remember if you download or share, my name and the link back to the original photo should always appear with it. 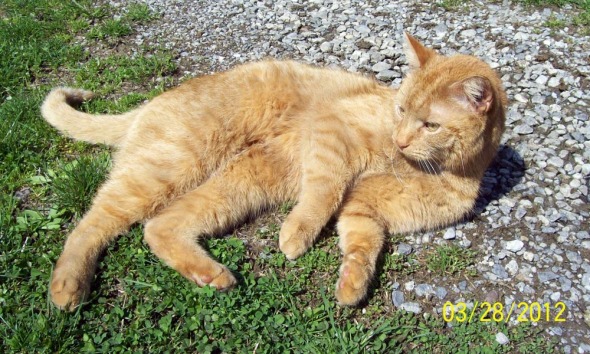 Pumpkin Pete being his friendly self.

How can people do this? 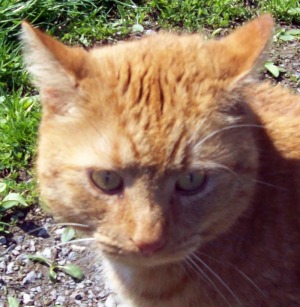 This poor guy (NEUTERED) was left behind by a sub-human when they moved away ! (people can be so mean) He has been living OUTSIDE for months, but remains extra-special friendly! He waits for me each day for his food & water.  He really-really-really NEEDS a person to call his own!

I’ve named him Pumpkin Pete and he actually comes to the name! 🙂  He knows my car and comes running for his pets, hugs, belly rubs and food  LOL

Does ANYONE out there have room in there heart/home for Pumpkin Pete ?

Pumpkin Pete lives in a parking lot near Pittsburgh, PA. You’d make an orange boy who is neutered and friendly very, very happy if you could take him in! Send an e-mail to the person who is caring for him. 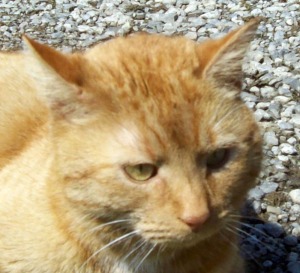 Often, pets left behind, especially cats, become part of a stray and feral colony, and in fact that is often how some colonies seem to form. I know that many of the cats I’ve taken in from my neighborhood over the years were left behind by people who rented in residential homes turned into apartments on the street next to me. Often this was not intentional as I’ve returned cats who escaped during moving to their people, but there have also been the cats that people hadn’t wanted in the first place, like Sasha, a cat I took in then returned to his owner but should have known better, especially when she called to say she’d moved and left him on her front porch…

And with the housing crisis, the economy, jobs, income, sometimes people need to give up their pets to someone who may not be as committed as they were and the cat ends up outside; unfortunately, sometimes people just abandon them because they don’t know what else to do. We know better, but this is often how they end up.

Anybody out there for Pumpkin Pete? Send an e-mail to the person who is caring for him.