And finally, the e-newsletter! 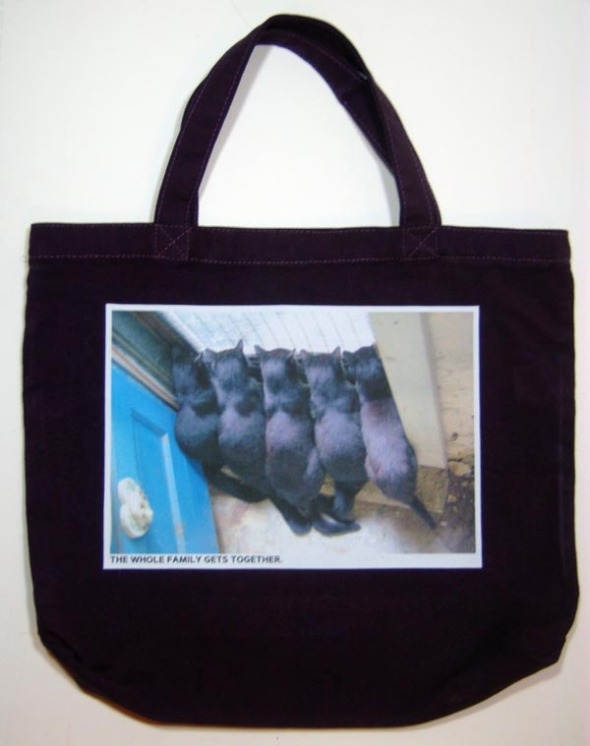 "The Whole Family Gets Together"

It took a little longer than I had thought, but we finally got it done.

My quarterly e-newsletter encompasses not only what happens in my art studio and Portraits of Animals store, but also in my work as a graphic designer and web designer, a photographer and writer and other disciplines that utilize design, writing and promotion. It’s handy for people to know all the different things I do, and while I blog about it on a regular basis, there is really no better way to get the word out than to package everything together.

So please enjoy reading about not only the new animal-inspired merchandise, but also the environmental projects I’ve worked with, the performers I’ve had the pleasure of photographing and the newsletters I’ve designed.

And it’s good for me to stop once in a while and take a look at where I’ve been!

Now will you quit playing with that computer and play with us?!

I guess I’ve been a little bit preoccupied… 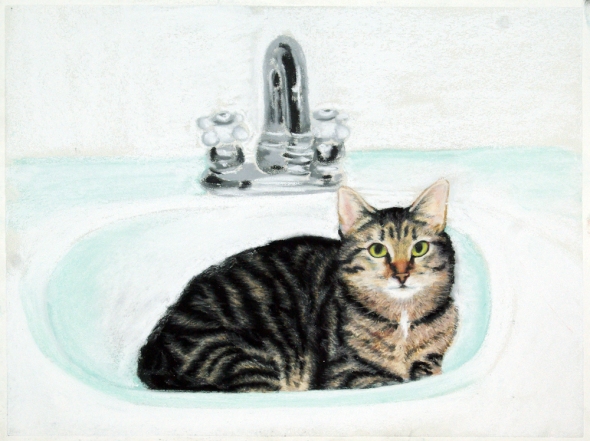 Yes, he’s really in the sink! I’m so pleased with this pose. When I work with a customer for a portrait, I ask them what comes to mind when they think about their animal companion. I advise them to choose a pose and setting as close to that visual as we can devise, using my own portraits as examples. It’s nice to have a formal setting where we can see every stripe and spot and whisker and sometimes this is entirely appropriate depending on the subject’s personality, but if they had a cute or quirky habit that can be illustrated into a portrait, we should do it! This is the first proof and it’s not quite his face yet, and of course the sink is just blocked in with some color, so there will be more finished views to come.

Madison’s person is the person I grew up next door to, but haven’t seen in years after she moved away for employment and then my mother moved out of her house and I sold it. Of all things, another person who grew up in our neighborhood but lives across the country found her on FaceBook and sent an e-mail, and we managed to get together when she visited her mother. How wonderful to find out she’s just as much an “animal person” as me, but sad to discover she had lost Madison at the age of only eight years old to diabetes.

I always let my customer make the decisions for the portrait, but if I see a good photo I’ll put in my vote without hesitation. He looked so natural in the sink and I loved his expression. “Oh, he was always in that sink!” she remarked. So here he is.

I’ll be posting updated views soon, but I’m getting ready merchandise for a festival this coming weekend and I may not update until after that.

Mewsette’s 10 Best Uses for the Bathtub No. 2: Playing With Toys

Mewsette plays with her toy in the tub where it can't get away.

Mewsette checks on the toy she left in the tub earlier in the day; it's still there.

Toys have an annoying habit of running under pieces of furniture where my long arms can’t reach them and simply sitting there and looking stupid, or rolling down a flight of steps and, frankly, they aren’t worth chasing.

However, a toy can’t climb the walls of a tub, so you can torture it to your heart’s content, then stop and rest or have a bath, knowing the toy can’t get away.

Mewsette Has Been Pestering Me… 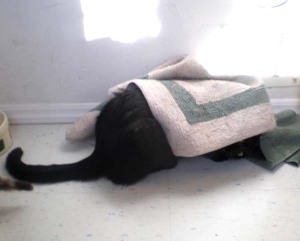 “Stop taking pictures of me and type my messages!” she insists. I admit, I’ve been distracted by their antics in the new bathroom and otherwise, plus there’s plain old everyday life…

Yes, yes, Mewsette, and I have plenty of other messages to send out, too! Actually, I have been taking photos of them to post and to use for my own selfish artistic purposes—see my post about “new photo galleries”, just below this one, that features two new collections.

Because she has no thumbs, she says, she cannot type her own messages and is at the mercy of my whims to disseminate her information to other felines about her tips about using the tub. In the next few days, Mewsette and I will post #2 in her best uses for the tub.

Also, I’ve been tweaking my website for easier browsing, kind of like tinkering with an old car to keep it running smoothly…soon enough it will be completely indexed and databased, but really, I’d rather blog. I’ll be posting frequently enough in the next few days to catch up with a variety of things I’d like to make sure you are aware of—Top Ten Cat Cities, the plight of pets in this economy, a crochet project, various news articles, and I’d like to introduce you to a group of friends who’ve written about cats for years and the books they’ve written.

Until then, enjoy the photos! 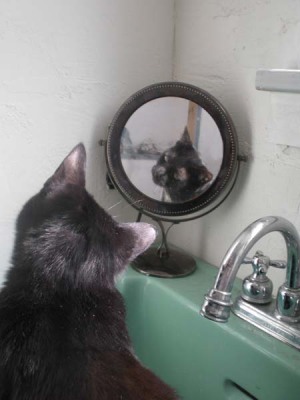 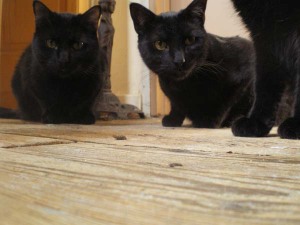 Mewsette’s 10 Best Uses for the Bathtub, No. 1: Bathing 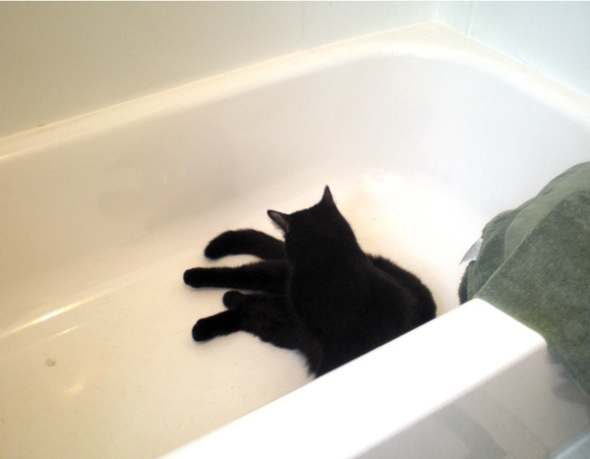 The tub works fine for bathing, even without water.

The tub is apparently intended for bathing, and I’ve found it to be an excellent place to enjoy even just a little face wash. Incidentally, the tub works fine for bathing without the water; I don’t understand why humans need total immersion. The tub is clean and smooth inside, so I don’t pick up any stray pieces of lint or dirt while I’m cleaning, and when I’m done I can leave behind all the loose hairs and debris I’ve pulled from my fur.

Everybody In the Tub 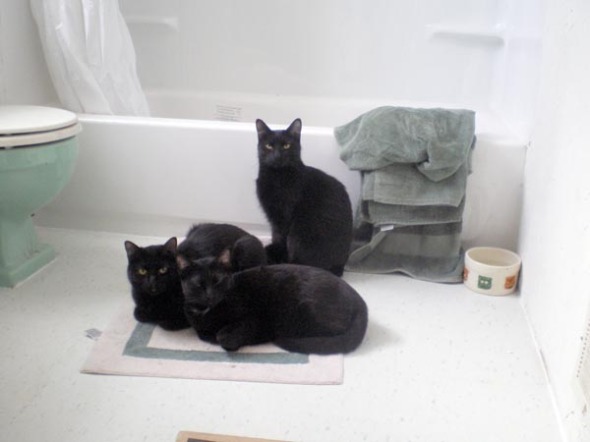 Family Portrait Before the Tub

The new bathroom is almost completed, and it’s really deluxe, white and mint green and bright with a new slightly larger window. Of course, Mimi’s Children must try out everything new, and they’ve been involved in the bathroom remodel from the beginning even when they were locked in my bedroom for their own good. Today is the first day the bathroom is complete enough to feel “real”, especially to me, because the tub and shower are done and the floor is down, though there are still a lot of details to take care of, and Mr. Sunshine, Mewsette and Jelly Bean (back to front) feel it’s time to have a little ceremonial photo taken. 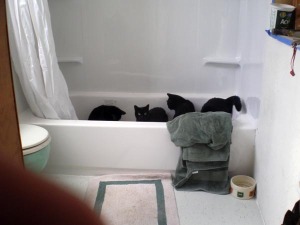 Everybody In the Pool

The bathroom is their favorite room, though, because they practically began their life in there–I moved them into the bathroom when they were just about three weeks old so they learned to walk and play and climb and destroy in that room; playing in the tub is a favorite activity, even as adults. Here their mom, Mimi, actually joined them; there really are five black cats in the tub, even though one is represented only by a bit of a tail.