July brings the anniversary of many things feline-related—losses, rescues, births, new artwork, and I’m looking forward to sharing the stories and related articles and information.

I begin below with two losses, but read on, they turn into beautiful things.

Today as I compiled and packaged my entries for the Cat Writer’s Association Communications Contest I had bittersweet memories of June 30 last year, the last day Namir spent with me. Though we knew his time was very limited due the advanced nature of his hypertrophic cardiomyopathy (HCM) and more frequent and severe bouts of congestive heart failure (CHF), his last day was just like any other day and for all that he and I shared I am glad we didn’t share a long and painful decline and debility.

I wrote a tribute to Namir about two weeks after he passed, and I’ll run this July 1, in memory of the first anniversary of his passing. It’s not sad because Namir was full of energy and creativity, a truly remarkable cat beloved by visitors to my house—in fact, he was always greeted before I was. I’m looking forward to sharing his antics and laughing over the goofy things he did.

And in his memory I’ll be providing links to information about HCM, which is all too common in cats but with newer treatments and medications is no longer a death sentence.

Between February 2006 and January 2007, I lost my four oldest cats. In the middle of those losses I fostered and found homes for a litter of kittens born to my Mimi, before she was my Mimi; I kept one of those kittens though I hadn’t wanted to with all the needs of my older cats. I hadn’t had a kitten for years, and my next youngest cat was then 11. Sleek, petite Lucy, solid black with yellow eyes became the new future of my household.

But when she was a year old she was diagnosed with effusive feline infectious peritonitis (FIP), and I lost her at 15 months. The entire experience was a story in itself, but to honor Lucy I’ve been working on some artwork using her image, bright and colorful and playful as the kitten she was. I’ll be glad to introduce the artwork and the story of her kittenhood in paintings.

Mimi and the Fantastic Four 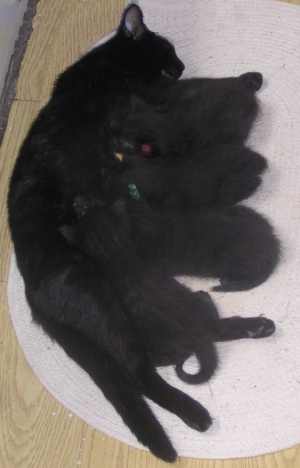 As much as I would rather have shared a long life with Lucy, she gave me a wonderful gift from beyond the rainbow. A few days after she had passed I was watching her mother in my garden, quite pregnant with another litter, and I know Lucy put the idea in my mind that hot July morning to take her in.

So July brings a rescue day and a birthday. The Big Four will be three years old on July 26, and Mimi joined my household on July 29. Now that’s a reason to celebrate!

And in honor of Lucy, the whole extended family, even the kitties who don’t live with me and those from other of Mimi’s litters, will be getting swabbed and entered into the FIP study at the University of California at Davis. I’ll be providing links to information about FIP and writing a few articles about treating FIP. 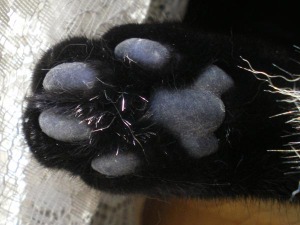 Many years ago a good friend of mine compiled a huge, comprehensive page of information about cats. This friend happens to be the mom of Angus and Donal, Lucy’s brothers, and she is also the person who taught me my first few lines of HTML coding back in 1997, sending my career off in an extra direction of design.

Amby’s Cat Information Page at www.amby.com still exists, and though she hasn’t had the time to update links and information I’ve decided there is too much there to just let it sit unnoticed. I’ll be extracting information, updating links and posting articles on The Creative Cat, beginning with an article Amby wrote detailing the process for trimming claws. In addition to the illustrations, we discussed videotaping the process and adding that to the article as well, so we’ll be working on that project for July as well.

Now that I’ve got my studio in shape, I’ll be able to begin working on portraits again, and I really can’t wait. I’ll be posting updates as I work so you’ll be able to see them take shape.

But for now, Peaches, who is doing well now that we seem to have her right inner ear under control, wants dinner. Everyone who’s been sending good vibes to Peaches, thanks! Keep it up every so often because it really seems to work for her!