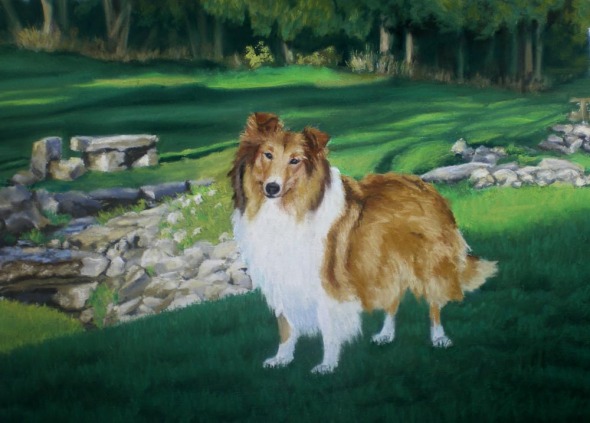 I was working on Lassie’s portrait when I initiated The Creative Cat, so she was the very first I featured just about three years ago today.

Lassie was with her mom for 15 years and had just passed when her mom first called me. She was in nursing school and would graduate in the spring, and would like Lassie’s portrait for her graduation when family would be in town. A very special collie I could see by her photos, the two of them side by side into the college years and a new city.

Details like Lassie’s head tilt were very important. This face is the expressive, intelligent face her mom always remembered, when Lassie knew just what she was thinking. I just wish I’d had a slightly better digital camera then to show more of the detail here.

Lassie’s mom decided she wanted to remember Lassie in the outdoors so the portrait would have a scenic background, and its final shape would be determined by the scene. She didn’t have a photo of a favorite place, but they  both enjoyed visiting parks and trails, and I have plenty of photos of places like that I began designing with autumn backgrounds; colorful and familiar, they are very popular in canine portraits and I’ve added my autumn scenes to several other dog portraits. 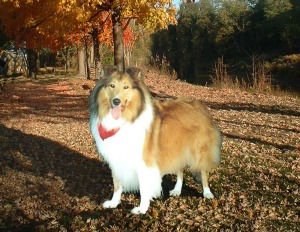 One of the autumn ideas.

However, Lassie kept blending into the background colors because her fur is primarily amber to brown, the same as the leaves we see, so I chose a late summer background of a rocky little stream and a row of trees in the background. The deep green of late summer grass shows off her fur to perfection and the glow of evening sun warms the scene. There was originally a tree in the near background, but I needed to get a little more detail on Lassie before I could find the best placement for the it so it won’t be distracting, and in the end we decided to leave it out.

Painting portraits of animals is plenty fulfilling and enjoyable, but I also love to paint my local landscapes so here was a painting that would be exciting in both respects, a landscape, and an animal. Not only have I worked for years to learn my palette and techniques for fur and wet noses, but also for landscapes. Here is a detail of the strip of woods from the top of the painting.

Detail of edge of woods.

I thought I’d include a progress photo where the background is half done, moving from left to right, and Lassie will need her last details done, but that will be after the background is completed. Working in pastel, the colors dust over each other, especially with heavy coverage like this background and the contrasting colors. 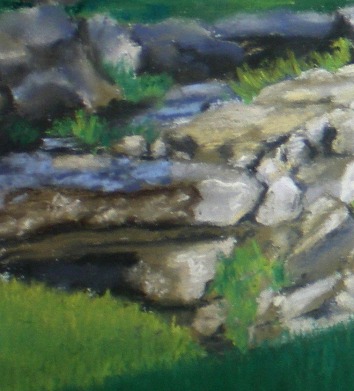 The rocks in the stream on the left.

In addition, here are two detail areas that I particularly like, the rocks on the left, and the rocks and grass on the right.

While the original portrait may look completely detailed in Lassie and in the landscape, a close-up look shows that many of the details are literally sketchy, just soft indications of light and shadow that when viewed together appear as they should.

Again, I wish I’d had a better digital camera then! I like to show these details not only for your enjoyment, but for those who have told me you are learning from these portraits as well. 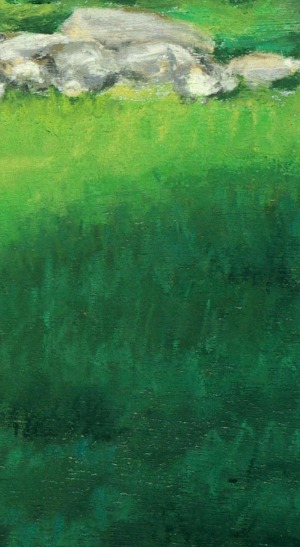 Detail of rocks and grass at right.

Reading things like this, in books and magazines in my day, and I still have many, was largely how I learned to do some of the things I do. I’m glad to pass it along.

Take a look at other portraits and read other stories

Read articles here on The Creative Cat featuring current and past commissioned portraits.

Read about how I create commissioned portraits.

NEEDED: Oxygen Concentrator for a Dog

Crawford is an 18 year old dog with a collapsing trachea. He can greatly benefit from the use of a concentrator.

Please notify if you know of one that can be purchased second hand at a reasonable price.

These are often used when humans have a home oxygen service as it can take room air and concentrate the oxygen in it for those who need oxygen for respiratory issues. The same equipment can be used for an animal.

Crawford’s mom and dad are good friends of mine. Please spread the word.

A Part of the Family

Bingo in the Center

We always knew it, but perhaps seeing it in print gives the idea a little more credibility.

From recent advances in rescue efforts that allow, even mandate, that people take their pets with them to shelters when they evacuate in the face of a disaster, to formal memorial and burial services for pets, our companion animals have achieved a new status in our society.

MSNBC ran a poll of pet owners and how they viewed their pets. Read about it at http://www.msnbc.msn.com/id/31505216/ns/health-pet_health/