Peaches Says, “Thanks for all the good wishes, they worked!” 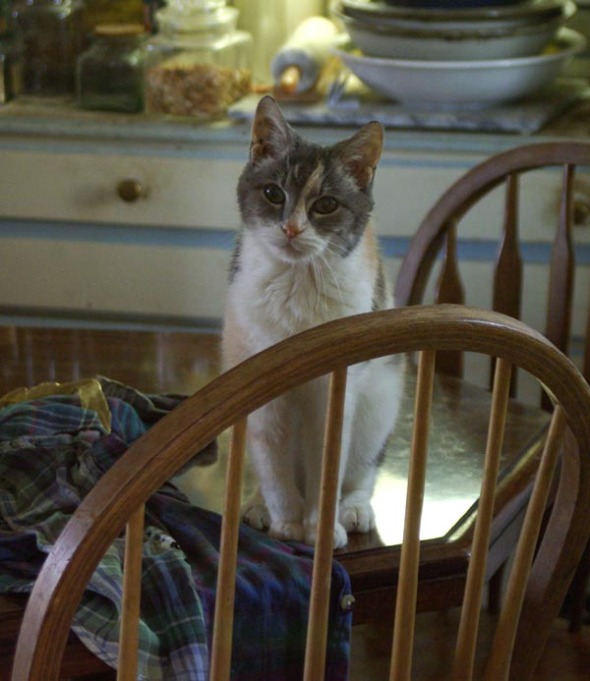 Well, I think I lost a few days in there, but at my age I don’t really care about time, except for when it’s time to eat, which is still every 42 minutes.

But I felt pretty bad for a while there. My mom kept waking me up and looking at me and smelling my breath, and then she’d follow me around and watch me in the litterbox—please! some privacy for a dignified older kitty! Then we would go into the kitchen, and I would get up on my counter to eat but I just felt crappy and even though I was hungry nothing tasted good. Then I’d go back to sleep some more, but I wouldn’t get any peace because mom would wake me up again.

Even before this I’ve had some bad days now and then. My tummy would gurgle and I’d throw up everything I ate, and it would be really hard to do, you know, number 2. I always thought that was the way it was supposed to be because I was 15 when I came here and it had been that way for years, even with my other mom when my sister was still around.

But this mom would have none of it and let me out of the room here but left my sister in so she could watch just me. I thought I had gotten used to my sister pushing me around and stealing food, but no one did that here and finally I could eat a whole meal and use the litterbox without anyone chasing me in the middle of…you know. Wow, I really started to enjoy mealtime and not worry so much.

If you don't get up I will dig you out.

Then my sister was gone and my mom started feeding me all sorts of different food “to see what works for you,” she said. That was nice. I really liked everything, but anything with salmon was the best. I felt very special, and I could eat whenever I wanted, well, almost.

Still, I would have days when nothing agreed with me and mom would hover. I just wanted to tell her to leave me alone and I would be okay.

And that’s the way this started out. I was comfortable curled on mom’s lap and she seemed relaxed about it. I had contacted Eva about the job opening for an office assistant and it seemed like that was going well, and I was trying to keep it a secret. Mom was at her computer all day, Cookie was mad because I was on mom’s lap all the time so she walked on me, and I figured I would be okay again in a day or two.

Will you please get up?

But it went on longer than usual. I knew I felt bad when Giuseppe tried to curl up with me on mom’s lap and I just didn’t feel like moving to make room, and he licked my face but I didn’t even have the energy to look up at him. About that time I started losing track of things and I knew I was really sick.

All I wanted to do was sleep, especially after mom and that lady that smells funny and the guy that comes with her were talking about “kidney failure” and all teamed up on me in the kitchen and tried to make me into a kitty sacrifice or something, sticking needles into me and filling me up like a water balloon. When I woke up later, I was really hungry and ate for the first time in I-don’t-know-how-long, and I felt a lot better too. Mom was so happy when I woke her up the next morning. I was hungry!

The kitchen is this way.

But it didn’t last all day. Mom tried to do the same voodoo thing to me and I said there was no way I was going to put up with that again so she didn’t get too far with it. Later my mom pulled some stranger in off the street about whom she said something like “vet tech school graduate” and “glad to find her and she lives just around the corner” to help her but I stopped that before they were done too. I may only be 5.4 pounds, but I know how to fling all four paws at once and throw everyone off. Mom said that was probably enough and they talked about how kitties “had to get used to this”—as if we’d ever get used to torture like that! Enough torture, just bring on the salmon pate! I’ll eat already!

I started out okay the next day and got right back to work pushing papers around on the desk and walking on the keyboard, but by later on I felt crappy again. It was really dark and everyone else was sleeping and I heard mom on the phone telling someone that she really didn’t want to wait until the next night when she’d “have someone to help her”, and suddenly I was in a plastic carrier with a warm blanket and we were moving! 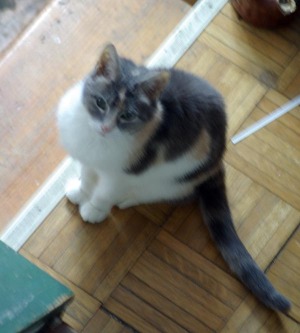 I am losing patience.

I never did figure it out, but we ended up in a strange place with lots of lights that smelled like more things than I could figure out and we were doing the needle thing again. Many hands were petting me and telling me how cute I was and what a strong kitty I was to have lived this long and they were sure I’d be fine. I wanted to tell them they had no idea what I did all day, that I am one hard-working kitty! And at my age yet!

I think we had a little snack when we got home, then the next morning I sat on mom until she got up and this time I was good all day. In the evening the same stranger came around who had tried to torture me with the needle a few days before, but she and mom just talked and petted me, and then they petted everyone else and I knew I was off the hook. 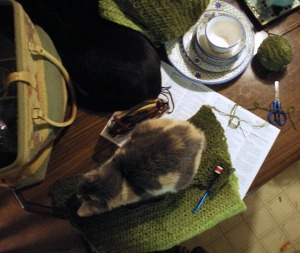 Peaches keeps my crochet project from getting away.

So I got to eat some pretty good stuff, that pureed chicken in the little jar that mom feeds me off a spoon, and all sorts of salmon pate, even little bits of cooked real salmon and, most exciting, real raw meat, little slivers of salmon and venison that mom warms up in her fingers. Mom gives me this now and then already, and I can’t eat too much of it but I don’t need to. I feel supercharged after I eat it.

And I got back to work and worked all week, helping around the house and I don’t know if mom would ever stop dawdling upstairs in the morning if I didn’t coax her down. Mom kept an eye on me, and that was a problem because I could barely get back to Eva to tell her I was well again and we should get back to our interview thing.

Near the end of the week, though, I started to slow down again and mom kept pulling at the skin around my shoulders and frowning and saying, “Hmmm.”

Then Kelly, who usually eats with me and curls up on the butterfly rug with me, wasn’t feeling well and I discovered she was upstairs in the bathroom. Mom called that stranger, who I guess isn’t a stranger anymore but this time she didn’t just visit, they did the voodoo needle thing again, both me and Kelly.

Maybe I really am getting used to it, and I also remember that after I had a nap and slept it off I felt really good, so I just put up a little fuss so they wouldn’t think I liked it or anything but I didn’t make them stop. Mom had me in a death grip against her chest, anyway, so I couldn’t even wave a paw, and she kept talking and talking which was really nice because she was warm and it felt like she was purring.

So now I’m waiting for dinner, and not only do I have to wait longer than usual but one of those annoying young cats is taking up her entire lap. The only good thing about them is that they are warm and soft and don’t mind when I touch them, not like Cookie or Kelly who can sometimes be prickly, but when I try to walk on him he squirms around and I land on the keyboard and mom picks me up and puts me back on her desk.

But it looks like mom is getting up now and dinnertime looks imminent.

And I got get well wishes from Daniela and Eva and Ingrid and Amber and Marg’s Pets who sent us “lots and lots of purrs, 2 woofies, 2 Heehaws and 1 Baa” and Allia and Bogey from My Three Cats who always sends us cool toys and everyone else who wished me well and so many others, and it made me feel so good that everything seemed normal again. Read the comments in “Get Well Wishes for Peaches”. What’s a kitty to do without the internet these days?

I’ll be in touch Eva!

Read about what started it all in “Get Well Wishes for Peaches”.

P.S. Peaches’ mom thanks everyone too! Your support was just as important to me as it was to Peaches!