Another Place for My Art: Distinctively Different Decor…

Interior designer—and fellow cat rescuer—Bonita Farinelli and I met yesterday to consign a number of pieces of my artwork and prints to her Boutique at Distinctively Different Decor & More in Carnegie.

Read more in this post on Portraits of Animals Marketplace. 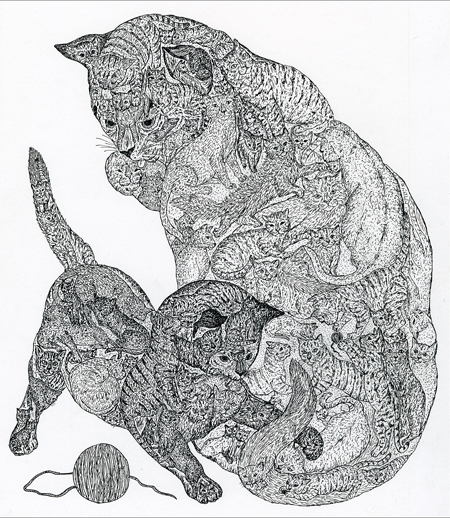 If you are of a certain age you will …well, you may remember the rock group “Santana” and the cover of their eponymous album, “Santana”. This cover featured an ink line drawing of a roaring lion which, on closer inspection, was actually composed of sketches of many other subjects worked together to create the features of the lion’s face and mane. You’ll just have to look it up, because any further description ruins the surprise.

END_OF_DOCUMENT_TOKEN_TO_BE_REPLACED

It’s not so long ago that rabid animals, especially roaming dogs because they were also pets and were part of everyday life with humans, presented a great health peril in this country from infection with rabies. Many people died from the disease before treatment was available—a bite would transmit the disease to another animal or human, and without treatment both would die from the effects of the disease in very short order.

But today in the United States we are fairly safe from this disease that is 100% preventable with a vaccine given to our pets, livestock, and even wild animals. In fact, in many states the rabies vaccine for your pet is the law. Because the rabies vaccine is so commonly given to our pets we may take for granted that rabies is hardly a threat except for the occasional bat or raccoon or unfortunate stray cat.

We still need to be aware and be cautious. My home state of Pennsylvania in 2010 had the distinction of having the most cases of domestic rabies of all 50 states, and between January 1 and May 30 of 2011, 114 raccoons, 18 skunks, 15 foxes and 12 cats tested positive for rabies in the state, according to an article in the Pittsburgh Post-Gazette. In June, A dog tangled with a rabid raccoon on the trail where I regularly ride my bike, walk, photograph and paint.

A current rabies vaccine for pets is the law in Pennsylvania, and in Allegheny County where I live, the Health Department sets out baited food with the rabies vaccine for raccoons in areas they are known to travel, or those numbers might be even higher.

Other countries around the world are not so lucky as we are. More than 55,000 people still die every day from infection with rabies because the vaccine isn’t available or isn’t widely used.

World Rabies Day since 2007 has worked all over the globe to both raise awareness of the dangers and prevention of rabies and helped to make the vaccine available for animals and treatment for infected humans, with the ultimate goal of controlling rabies in animals to prevent it in humans. Since they began inviting agencies to participate in the effort, “every major human and animal health partner at the international, national, state/provincial, and local levels as well as veterinary, medical and other specialized professional and student organizations, corporate and non-profit partners”.

Check your pets’ records and make sure their rabies shots are up to date, and if not, make an appointment. Visit the website for World Rabies Day to read more about what’s happening around the world today. 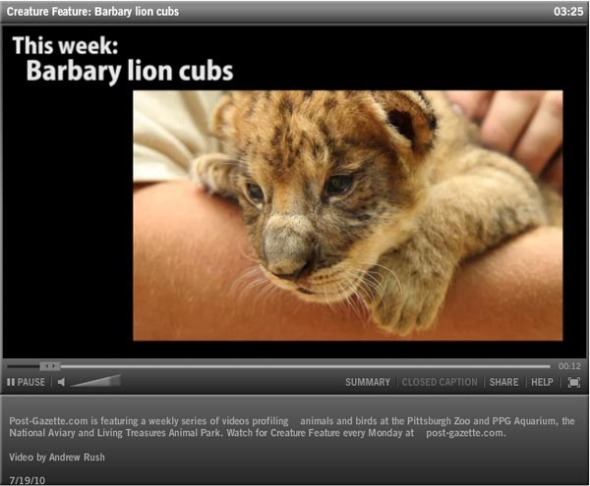 The Barbary Lion, the world’s largest lion, has been extinct in the wild since 1921 but exists in breeding programs at zoos. These cubs were born July 7 at Living Treasures Animal Park north of Pittsburgh.

The cubs are being hand raised and will be sent to the breeding programs at other zoos to help maintain the species distribution.

In the meantime, they are squirmy little balls of cute!

Here is the link to the video on the Pittsburgh Post-Gazette website, or click on the image above:

And here’s a link to the staff’s blog about the interview with the cubs and their handlers, and more photos: