You’ve all seen my finished artwork, now here is a chance to see the underpinnings of that—the humble, simple sketch.

This is one of my daily sketches of my cats, done in pencil on drawing paper entitled Three Cats, signed and dated 12/3/11 of three of my kitties curled together on the bed. From the left is Jelly Bean, Mewsette and Giuseppe. I could picture this one as soon as I saw them, and it was all I could to to sneak soundlessly away so I didn’t wake them to get my drawing pencil and pad.

I endeavor to do at least a small sketch each day as a warm-up to my aesthetic senses. I’d fallen away from this for a while just in the busy-ness of every day, but I’ve been happily at it again consistently enough that I can post one nearly every day as well as my daily photos. Both of these activities give me the incentive to do more and different work, to experiment, to be inventive and “in the moment” with the subject and also with my ideas, something that’s rare in my daily tasks of commercial art. In addition, I can share it instead of finding these things years later in old sketch books.

And I was also inspired to keep sketching cats and to share them by my copy of Steinlein Cats, a Dover large-size paperback including just pages from Theophile-Alexandre Steinlen’s sketchbooks featuring his sketches of his own cats. A few of his poster designs from before the turn of the last century are iconic, as I mentioned in a post about a photo of mine that reminded me of one of his compositions.

And rather than keep them all to myself, I’ll be selling a few of them as well. What we hang on our walls is extremely personal, but I’m a big proponent of having at least one piece of original art that was created by hand, and sketches in their simplicity offer such an intimate relationship with the artist, sharing a moment and something touched by another human. I offer the signed sketch alone for $25.00 for you to frame, and all will be fairly small and fit into a pre-made frame. I will also offer to sell it matted and also matted and framed. For examples, visit my new gallery in my Etsy shop entitled Daily Sketches, Cats etc.

And before I go on, let me explain that pencil is phenomenally difficult to photograph or scan; you may see shadings on the paper, but just the drawn lines are there. I may have to invest in a better scanner again.

This is called “Reticulated Kitties“, done in pencil on drawing paper, signed and dated 12/1/11 of four of  my kitties piled up on my desk while I’m trying to work. On top is Mimi, on the bottom from the left is Jelly Bean, Mewsette and Mr. Sunshine.

This is drawn in a style I learned as “reticulation” where the entire drawing is done in one line, sometimes retracing a path to get to another point, using loops to make their toes, for instance, and zig zags to create detail and texture, but never lifting the pencil from the paper until the drawing was done. I was inspired to this by the cats themselves and their seemingly endless flowing selves as they piled on each other, though I did cheat a little and do a light sketch underneath as a basis for my one big line.

I had also intended to use a colored pencil, or even layers or shadings of colored pencil, but grabbed the old Ebony drawing pencil instead. That’s okay, there will be time for the other technique I’m visualizing.

I have a small pouch of art materials and a few various sized sketchbooks available in the house and out. Usually, these sketches are done in pencil, my first and favorite medium, though sometimes it’s charcoal, ink, colored pencil, ink and brush, whatever strikes my fancy at the moment, the greatest challenge to keep it quick and not get caught up in details, let the idea flow onto the paper.

Most often, the subjects are my cats because they are such willing models (if they like to eat they’d better be), though sometimes I’ll also wander afield, literally, and sketch in my yard or anywhere I go for errands. 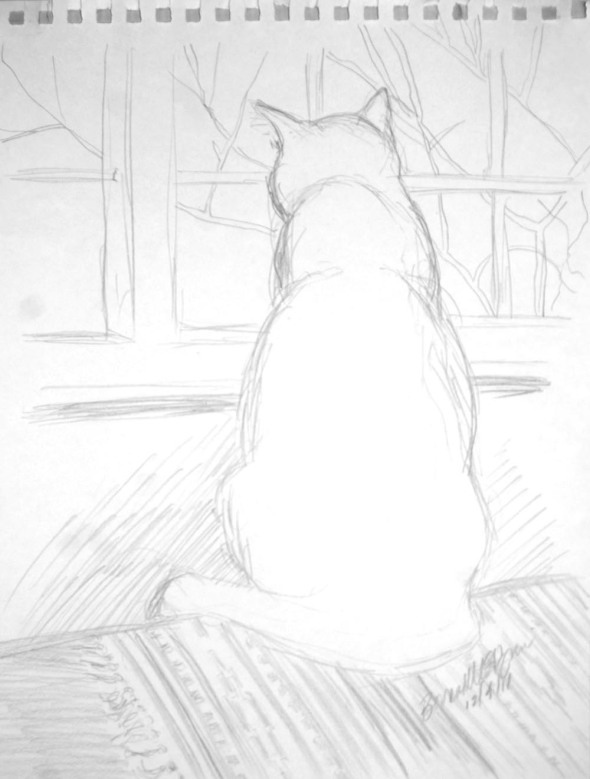 This one from December 4 isn’t offered yet, partly because I’m not sure what to do with it and this is sometimes the quandary of the daily sketches. There were three cats looking out the window when I began, two left and Mewsette, who is here, moved, so I had a pile of guidelines, then went in another direction, adding in the patterned rug I have on the tabletop just as an experiment, and then also the branches outside the window. But it’s 11″ x 14″ (minus the tabbed edges on top where I pulled it from the tablet), and I just feel that’s too big. I’ve often cropped an original drawing down to the part of it I like, and in this case I like just this so it may be what I offer:

Every once in a while, they are meant for framing, and I’ve designed a series of notecards, notepaper and notepads using other feline daily sketches and also scenes from nature. Often I use them as illustrations for graphics projects I’m designing. I can easily create a digital file to keep if I want to use them for production, and still sell the original for someone else to enjoy.

They are all on Etsy

You can be certain I’ll be posting my sketches here with a link to the specifi art on my Etsy site, but you can also browse them here in the menu by choosing “Daily Images>Daily Sketches” or by visiting my Etsy shop in Daily Sketches, Cats etc.