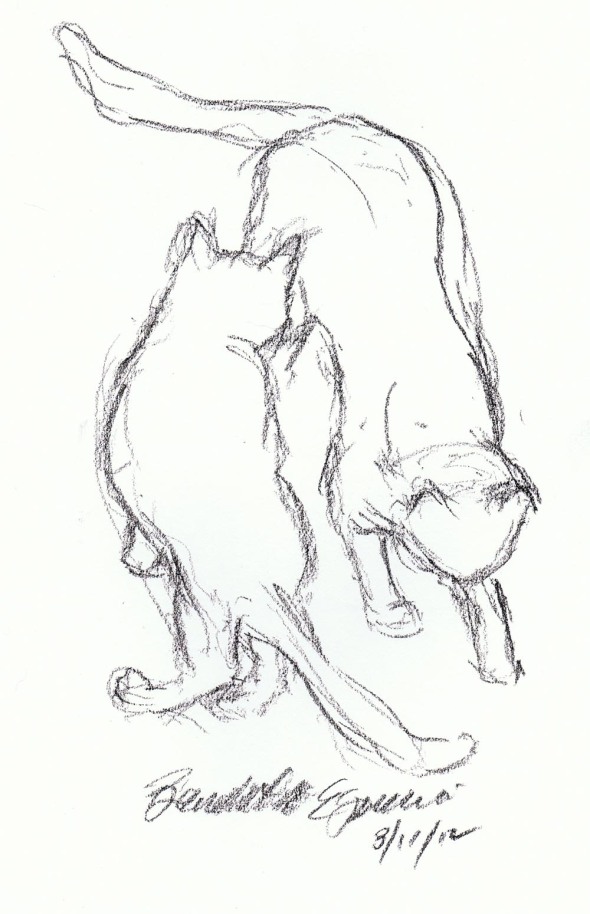 Kelly had been enjoying catnip (again) and bathing by the sunny back door, and Mimi wanted to join her. Kelly was fine with this at first, then Mimi moved a little closer and Kelly got nervous so they essentially traded places.

Of course, no one but me would know who this is or that one of the cats is tortoiseshell Kelly. I didn’t even add her facial detail because her face was entirely in shadow, but even that was difficult to catch as every new view I tried as the cats walked around and I stood in the same position in relation to them their faces were different.

For me, it was a lot of interesting and difficult angles as I tried to capture their placement in the moment, then flesh them out later; I had to do a good bit of study after the fact. Often I take a photo of my subject but I only have two hands and if one is holding the sketchbook and the other is sketching, the moment goes by.

Click here to see other daily sketches, and for a gallery of the ones available for sale, visit my Etsy shop in the “Daily Sketches” section. 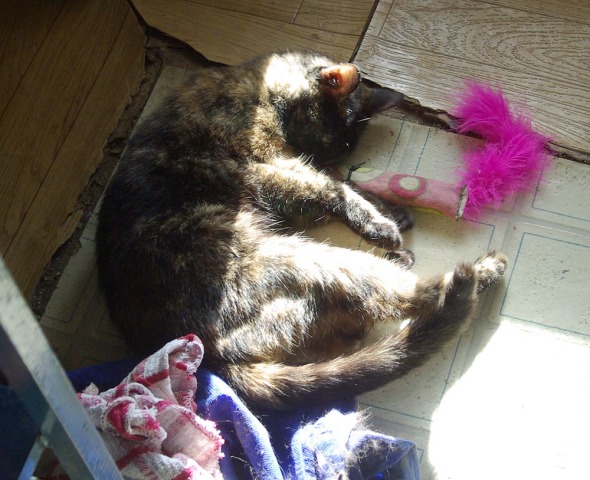 Kelly decided to have catnip for breakfast today. Is that a problem?

She was happily eating right next to Mimi on the cabinet, then abruptly and deliberately jumped down and headed right past the Fantastic Four on the Floor eating their breakfast, a brave move for Kelly. Her destination was obviously the catnip toy with the pink plume feather which seems to be her favorite.

I don’t know, if it can take Kelly away from her breakfast, I think it may be a pretty serious issue, beyond the usual effects of catnip.

First she threw herself down next to it and took a big deep sniff, pulling some of the dishtowels headed for the basement into the act.

Then she wiggled and rolled around on it.

Then a big wiggle.

Then she flopped herself nearly upside down. 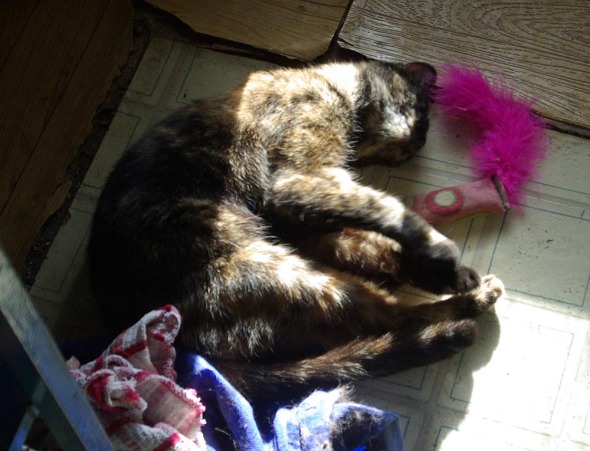 It is good to see Kelly relaxing, and after her little nip she got the munchies and ate a really good breakfast. In any case, it was a great start to the day.

And, yes, this is the same timid little Kelly I’ve been writing about in A Little Bit About Kelly—what a difference a decade makes!

Here’s Kelly just the other day with the same catnip toy. I’ll have to find out what’s in that particular toy; their Aunt Carolyn gave them a bunch to try out that she wants to sell in her online store, MyThreeCats.com—this is not a product placement, we want to thank her publicly! 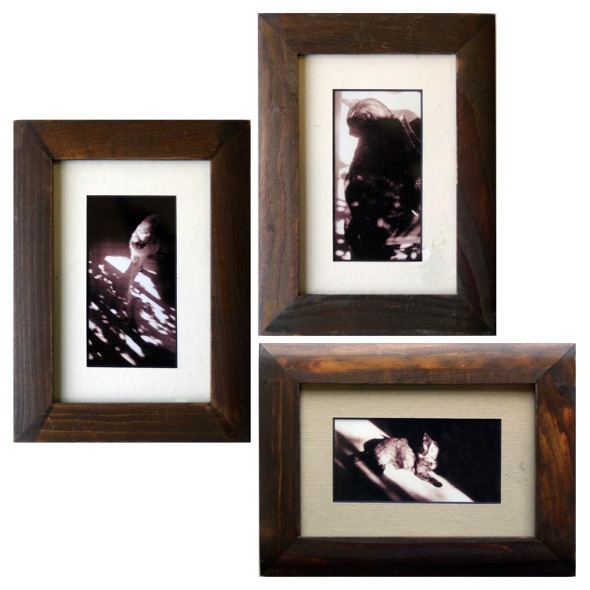 Set of sepia miniature photos of Stanley, Sally and Cookie.

I’m sorting through merchandise as I bring it back from my shop and found these three photos. It seems so long ago I took these photos, and I realize it was nearly 20 years ago. We were all so young, what a sweet memory!

I don’t like to leave things packed away—I forget they are there, and I forget where they are, so as much as possible I hang things on the wall. These three will hang near the kitchen doorway again, but I’d love to find a home for them. 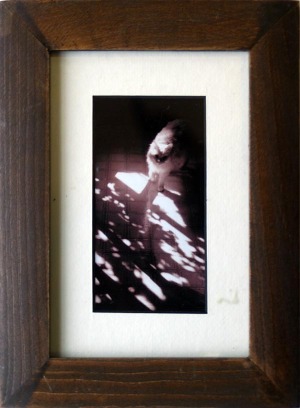 Cats love to hang out in the sun, and sometimes the combination of their markings and the light and shadow can create an abstract effect, especially in black and white. I love miniatures too, especially in sets, just little accents that make a statement all their own.

These are three of my favorite little black and white photos which I printed in sepia to match the walnut-stained frames, and hand-cut black core mats to match in tan and natural white. 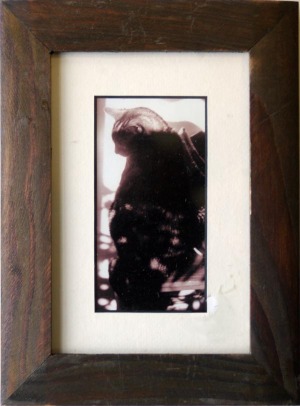 “Sunny Cookie” featuring my tortie girl lying in a diagonal strip of sun is a horizontal image matted in ecru with a black core. 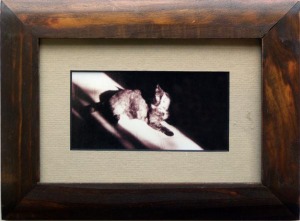 Frames are solid wood, walnut stained but with no polyurethane so the texture of the wood shows in a matte finish.

You can find the listed in my Etsy shop under Sepia Miniatures, Feline Photos Set. 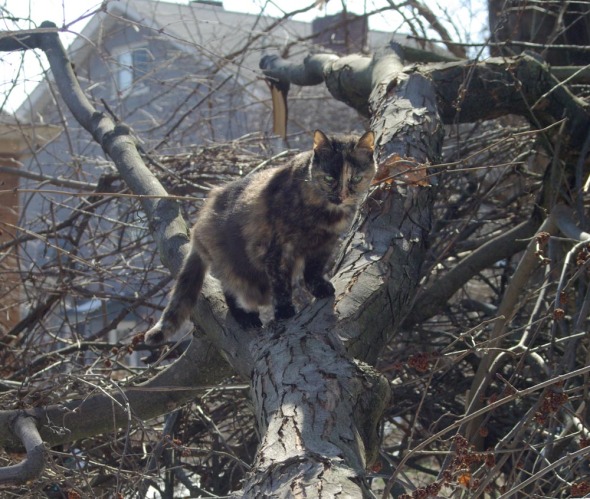 Will you quit reminding me I'm 17 years old?

As the winter passes and spring slowly unfolds in the back yard I’m remembering the years Cookie and I spent out there. Browsing photos I often encounter photos of her, including these from March 8, 2010, as the snow slowly melted after a series of heavy storms in February. Even though I shoveled paths into the snow it was weeks before it melted down to the soil, and at 17 Cookie finally found that walking on snow for any length of time was just too uncomfortable on her tiny tortie paws and she would wait on the deck or the steps for me. For some reason I never wrote the post I had intended to with these photos, so there’s no time like the present. 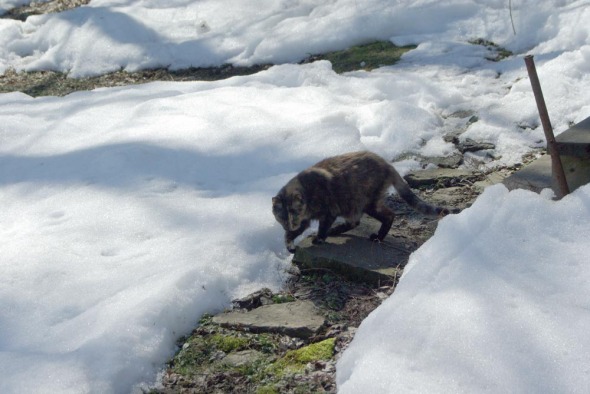 I guess it's mud or snow, but I have to get to my back yard.

One day enough snow had melted that she decided to follow me around as I filled bird feeders and Cookie explored her strange new world. The most exciting thing, for Cookie and me at least, was the large branch from a neighbor’s tree that had snapped under the weight of the first heavy snowfall (I was watching that night and saw it fall), landing just next to the picnic table and leaning up on the fence and another of the neighbor’s trees. I didn’t mind it, and they didn’t come out to clear it away, so it became, so far, a permanent part of our back yard. 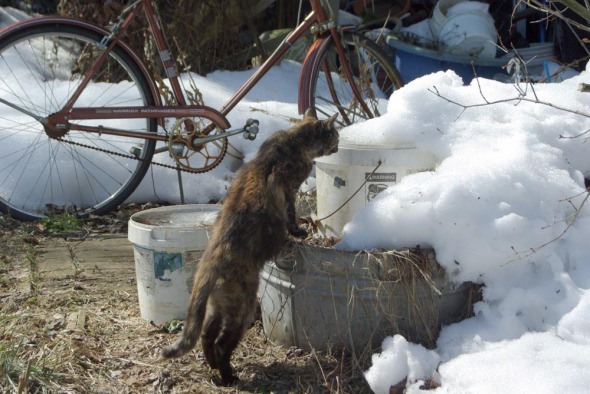 What happened to my garden?

One of the most amazing things I always found about Cookie was her fearless curiosity. There was something new, she explored it—a box in the house, my art materials, a visitor, Cookie immediately and wholeheartedly acquainted herself with it. 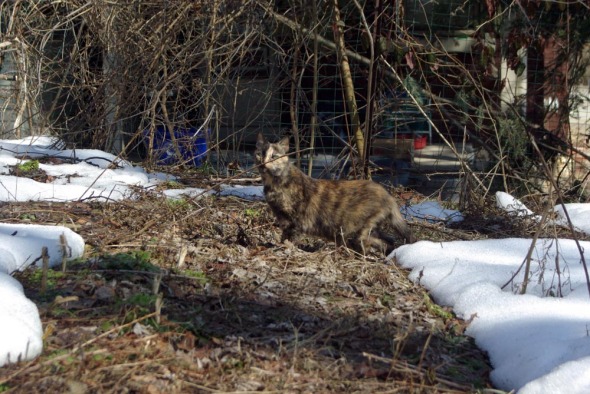 Curiosity is legendarily a cat’s province, but a reason to consider this a little extra special in Cookie was that she always had difficulty walking just from weakness in her hind legs, likely from her early deprivation. Even when younger she couldn’t run or jump very high and while still young quit jumping altogether to climb step by step onto things. This never stopped her, and it didn’t even slow her down because she got herself everywhere she needed to go, and her ingenuity at finding a stepping stone path of different levels anywhere in the house to get anywhere she wanted to go is something I’ll always remember. She never complained, just happily made her way around things; as she grew older I surreptitiously added things she could step on in every room. 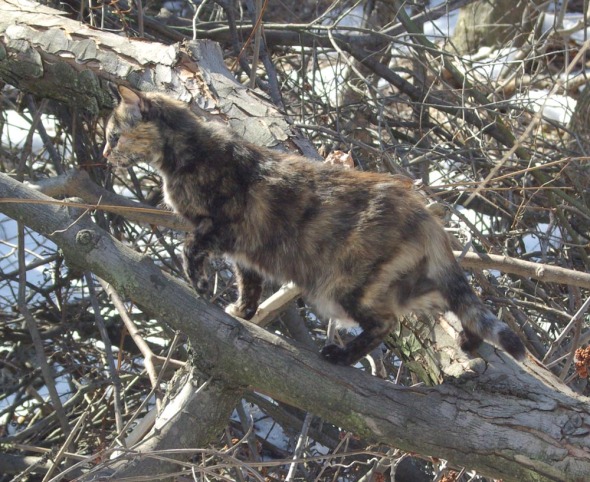 So I look at her on this log at the age of 17 with fine balance but without a whole lot of strength in those legs. She walked down the muddy path in the snow, met the branch and happily stepped up on it and looked around, took a few more steps up and looked again, then walked out as far as she dared, then walked back. She was also wise in knowing exactly how far she could go, literally, and still be able to get herself safely back to where she needed to be. 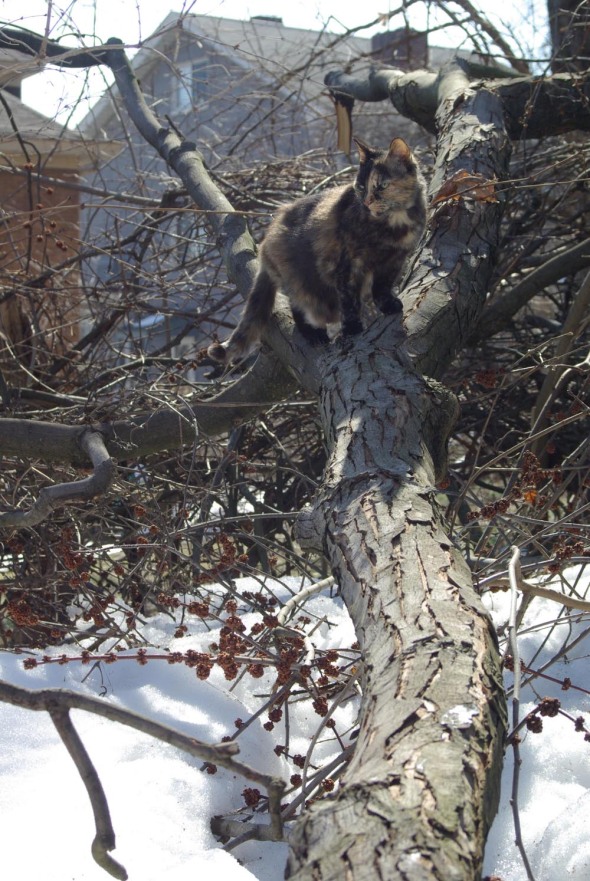 Wow, the view is really great from here!

The branch fell at just the right time because the previous year she had been able to pull herself up onto the picnic bench, but it was an increasing struggle. The first thing the next spring the branch had fallen and I guess she thought it had been provided for her. She used it from then until just a few days before she died to both sit on, scratch on and step up onto the bench. 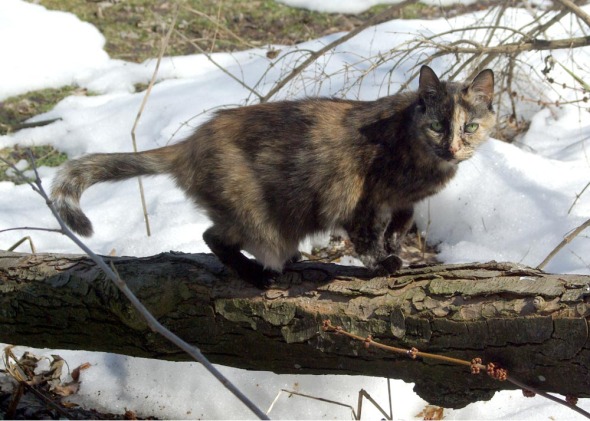 Cookie balances on her maiden voyage on the branch.

It’s just a tree branch, and I’m a cat. What’s the big deal? I’ll still be doing this years from now. 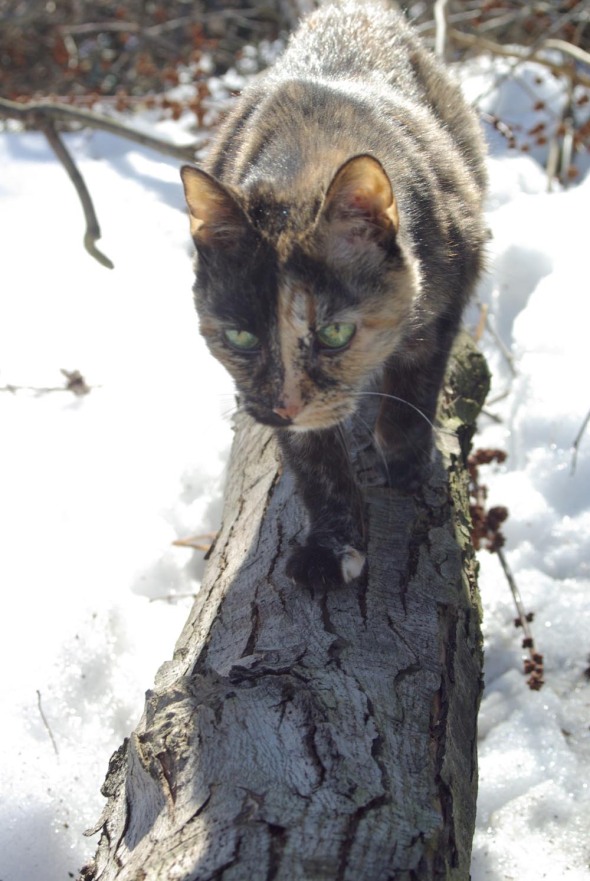